Last weekend was really busy with the Classic Motorcycle racing at Levels Raceway over a 3-day weekend and the Canterbury branch of the New Zealand Founders Association Christmas dinner on the Saturday evening. With the Liberals Raceway being 160 km south of Christchurch and the founders dinner 70 km north of Christchurch it involved a bit of driving.

Also I had to be home to talk to the fibre guys about installing fibre into Roydon Drive on Friday morning.

Nancy and I returned from our Invercargill trip on Thursday, cleaned up and restocked T5. After the fibre guy had left on Friday morning I left Nancy at home with Penny and headed for Timaru. I went to the caravan park at Seadown where Nancy and I had stayed before and dropped off T5, then to Levels Raceway to meet up with old friends and check out all the bikes.

After checking out all the old bikes I found a good spot to take photos and spent a couple of hours getting back into practice at shooting motorcycles. Then when wandering through the pits I found a friend having trouble with the clutch and spend some time offering advice and then getting my fingers dirty. After a couple of beers and some greasies I headed back to T5 for the night.

Shaun Mills. The clutch seems to be working OK now.

Dennis Charlett, the man to beat. 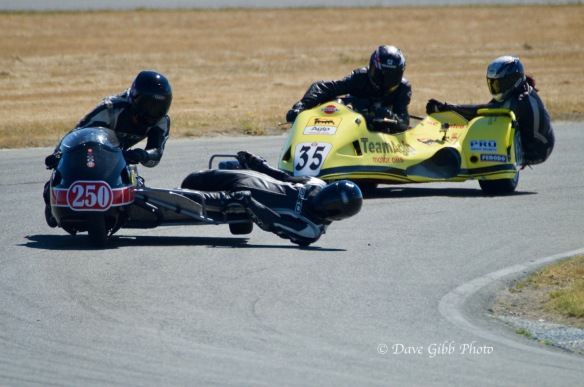 Pete Dowman and Brian Greenlees ahead of Jarrad and Keli Winter.

After checking out some more of the machinery I spent some time taking photos until midday when I had to pack up and drive back to Ch’ch. After a shower and a quick change Nancy and I picked up big Sister Alison and headed for a property at the back of Loburn. 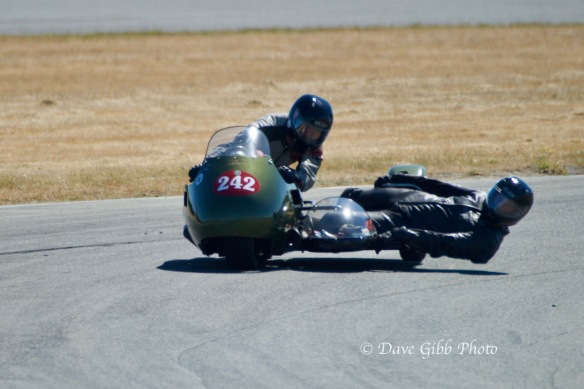 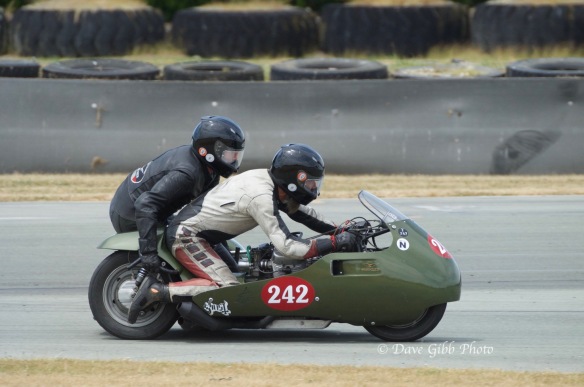 We arrived about 4 pm and found some people already sitting under the shade of some magnificent old trees where the nibbles were plentiful and the talk was flowing …  The potluck dinner was excellent and the company was good and a great time was had by all I think. We left Loburn in brilliant moonlight from the nearly full moon.

Next morning I was away from Templeton early …. again …. and heading back to Levels where I arrived in time to check out some more lovely old bikes and also a few not so old bikes before the racing started …. then spent most of the rest of the day taking photos. After helping Rob pack up (which mainly consisted of holding my beer and trying to keep out of the way) we headed down to the prize-giving at the track bar.

Luckily Seadown was not too far away from the track so I was back at T5 in time to get all hooked up and move a bit forward to get some TV reception so I could watch “Blue Planet” before hitting the sack.

Monday morning I was on the road extremely early, so early that I was too early to see the Aviation Museum at Ashburton, so I that flagged that and headed straight home. (To a rapturous welcome from wife, dog and cats, I might add – Nancy).

I have fallen behind again with this blog – we’ve been back home over a week.

Leaving Clyde we set off for Tekapo, with a quick stop at Cromwell to buy some berries.

At first there were only Southland yellow lupins lining the road, but then colours started to appear. By the time we were in the southern foothills of the Lindis Pass there were swathes of brilliant colour everywhere, sometimes well inland along the waterways. It is fortunate that lupins are not poisonous to stock and in fact can be used as feed for sheep at least. 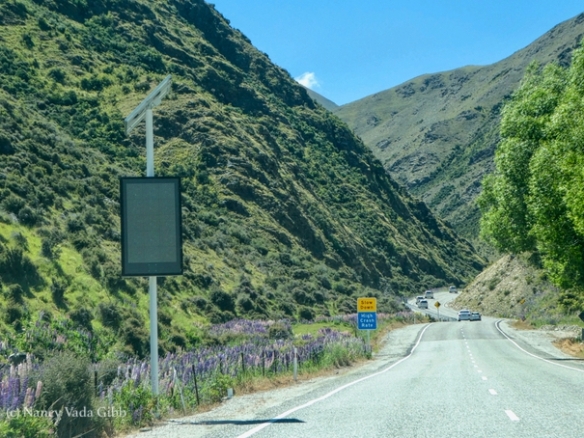 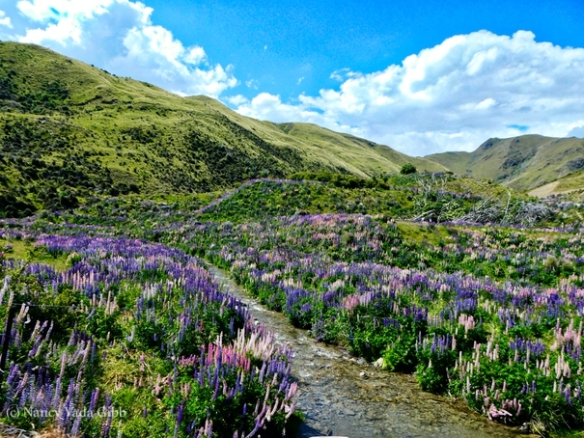 Thanks to recent rain the normally brown hillsides of the Lindis seemed to be clothed in green velvet, rather ancient velvet perhaps, discoloured in places and occasionally moth-eaten. Then downhill again and more lupins. 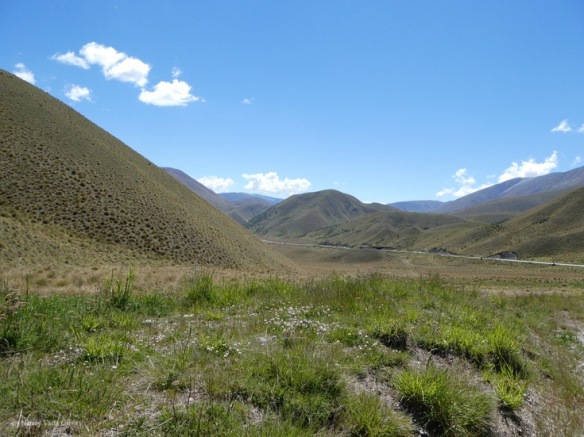 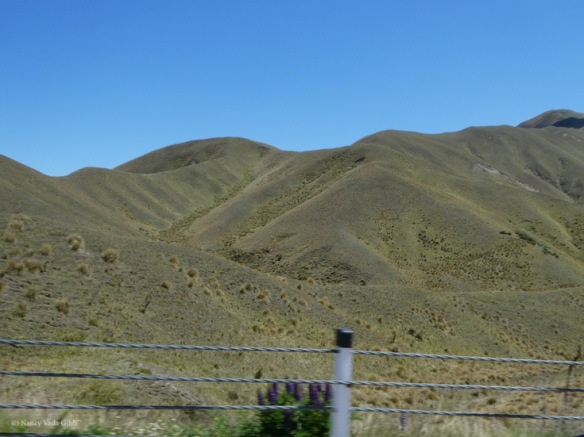 At Twizel we stopped for lunch and to visit the Ulysses tree. It was planted a few years back to mark 25 years since the first AGM was held in Twizel.  Any members going past give it a good watering.

On past Lake Pukaki with its views of Mt. Cook.

And so to Tekapo. The town continues to enlarge; there is now a new supermarket. It always seems strange to be there without our boat (sold when we started caravanning). Those chilly days when we trolled slowly for salmon and trout, rugged to the eyebrows, gazing at the snow-covered hills as we circumnavigated little Motuariki Island  – they seem so long ago. But it’s always good to be back. 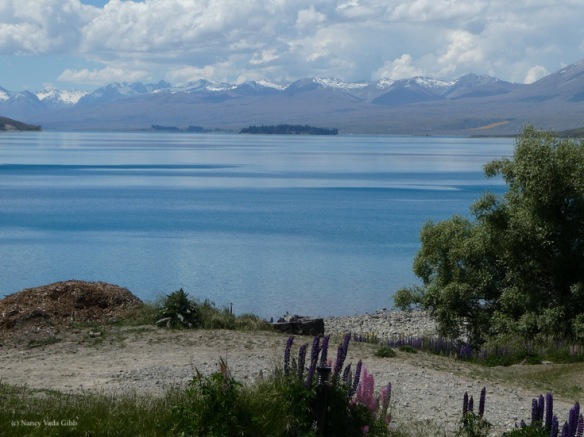 The NZMCA (Motorhome & Caravan Owners’ Assoc.) has a good camp on the foreshore, among the pine trees. It took us time to find a reasonably open patch of ground open to the north so we could receive TV reception. A later arrival tried several positions before he found one to suit. The only drawback of that camp was the heavy load of pollen which drifted down from the trees; it covered the truck and got in my hair!

An evening walk yielded some photos a little different to the usual lupin-laden ones!

There were lots of rabbits to be seen, including this black one which is surely an escapee..

That evening there was a phone call from Graeme and Barb in Clyde – their TV was on the blink again. They’d been so thrilled when Dave got it working for the first time in weeks.  We decided to go back to Clyde for a day, leaving the caravan at Tekapo. Another reason was that Penny had left her favourite ball behind at the camp site beside the Dam (!).

We did not stop to take lupin photos on the way but I did manage to get a few through the windscreen. There was a cattle muster going on and at one stage we rounded a bend just as a helicopter landed beside the road. No time to take a photo – so I was amazed when I discovered the helicopter, presumably the same one, in one of my slightly earlier photos. Some cattle are visible too.

On arrival we went to the Dam first and there was Penny’s ball lying in short grass in full view of anyone walking their dogs – amazing it wasn’t snapped up particularly as it glows in the dark! Definitely a good omen.

G and B gave us a lovely lunch, the TV was fixed again and at last report was behaving, and it was back to Tekapo with coffee at Twizel on the way and more photos of Mt. Cook, which must have been busy making more clouds. I have been experimenting with some photo-enhancing software so these photos have different textures. 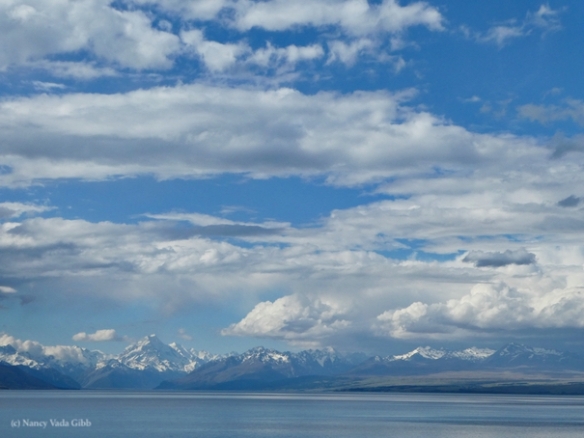 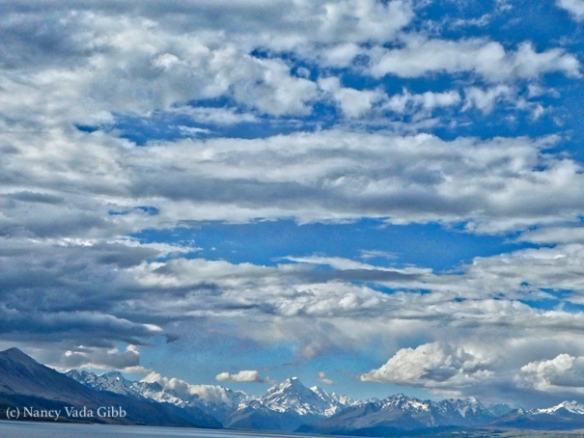 NOT a wasted day, the scenery alone on the drive is always fantastic. This time I remembered to take a photo of the poplar trees beside the river between Clyde and Cromwell. Compare with an earlier photo taken in 2013 at a very different time of year.

There were some interesting clouds and then just past Lake Pukaki we encountered a terrific rainstorm, it came up very fast and the rain was so heavy it was almost impossible to see the road. Luckily it did not last long. 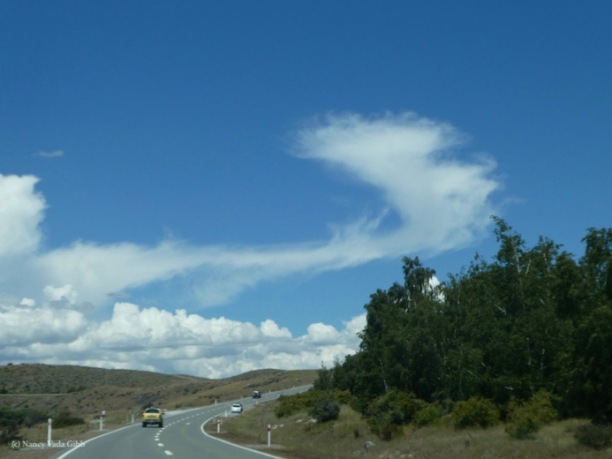 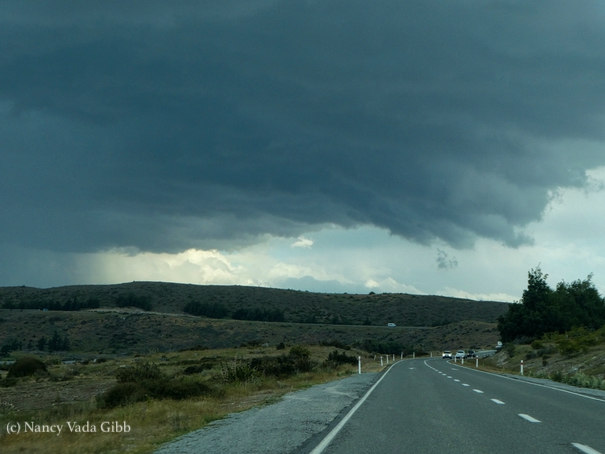 Next day – home! We arrived around lunchtime to a transformed garden (amazing how plants respond to warmth and water) and a lovely welcome from the cats. Even Penny seemed happy to be back home.