As I prepare this for posting it is 3rd October, exactly two years since we left home to start on our caravan adventuring. TWO YEARS???

After leaving Blenheim we spent a few days around Nelson while Dave helped his niece with some home improvements. We stayed in the NZMCA camp which is part of the Richmond Racecourse/Showground.

The Racecourse is a very quiet place most of the time although it’s easy to imagine the bustle on race days. All the buildings are so old particularly the enclosed horse boxes, the doors worn down by generations of strong horse teeth. Nearby the open stalls were once shaded by an avenue of huge, really huge old trees, now reduced to stumps. 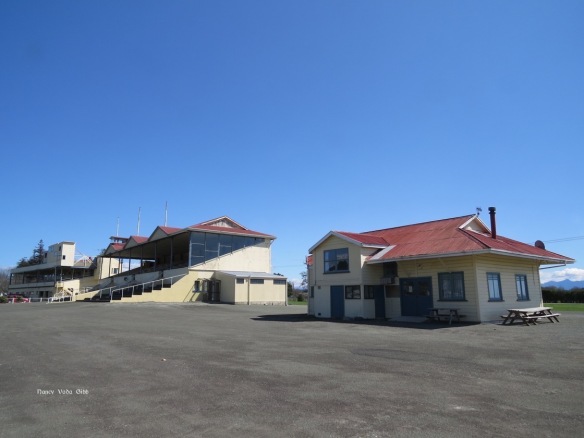 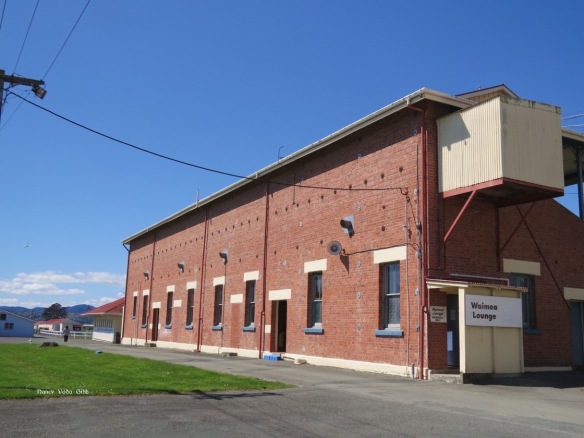 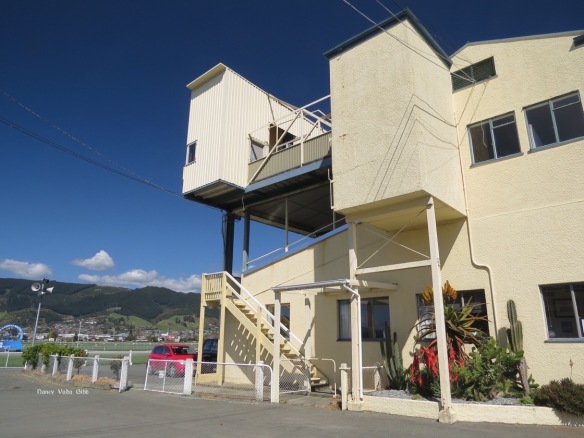 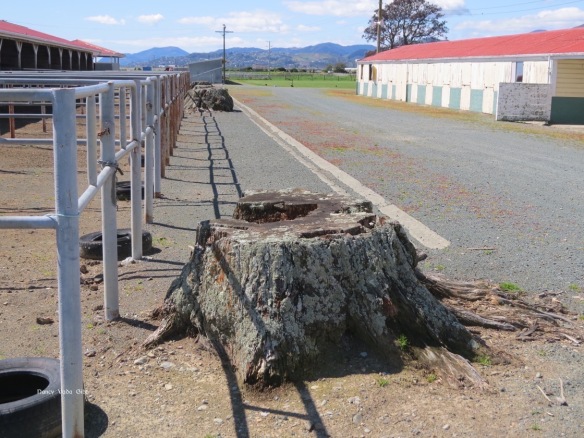 Near the grandstand is a memorial to the Wahine, surrounded by a garden full of flowers and herbs (which I was invited to use). 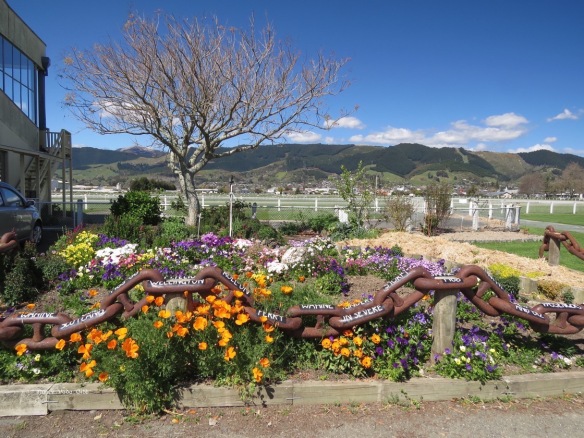 The grass everywhere was very green and identical brown horses covered with identical horse blankets grazed everywhere in the outlying paddocks – how do the owners tell them apart? Sheep grazed in the middle of the racetrack. A young police dog was being put through its paces in a back area.

On Sunday morning there was a little Farmers Market – two fruit and vegie stalls, a soap stall with some creative products, one selling the usual alternative health products, and two craft stalls, one covered with original crocheted hats mostly a la Minion style but with various twists. I should have taken photos; here’s one of my more conventional ones if that adjective can possibly be used!

We drove up to Mapua, Ruby Bay and Motueka for the day and explored the coastline. Motueka was once an important port but is now a pretty stretch of coastline deserted except for the wreck of the Janie Seddon which belonged to the big fishing company Talleys and was beached in the 50s. She was the company’s first fishing vessel built in Scotland in 1903 and was used as a Port Examination Vessel in Wellington during WW2. Talleys bought her as a coal-powered fishing trawler in 1947. Some people have expressed concern about safety hazards but as one local says, is the wreck any less safe now than it already has been for decades? It’s a landmark and a key part of Motueka’s history. http://www.stuff.co.nz/nelson-mail/news/63407740/Old-wrecks-days-may-be-numbered.

It looked like the locals take considerable pride in the shoreline. Colourful flowers were everywhere. I was intrigued by what I think is a giant Billbergia (“Queen’s Tears”), certainly the biggest I’ve ever seen. We will have to go back later to see the flowers to confirm this. 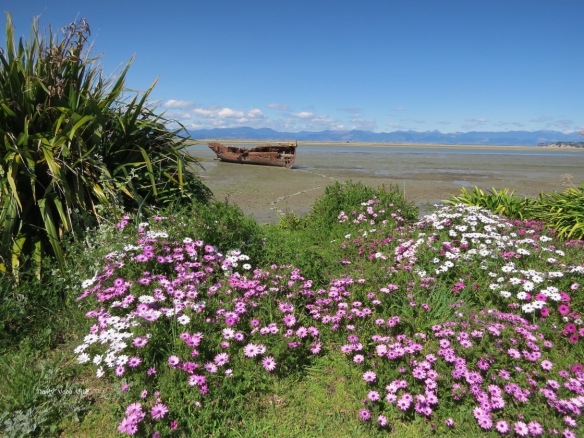 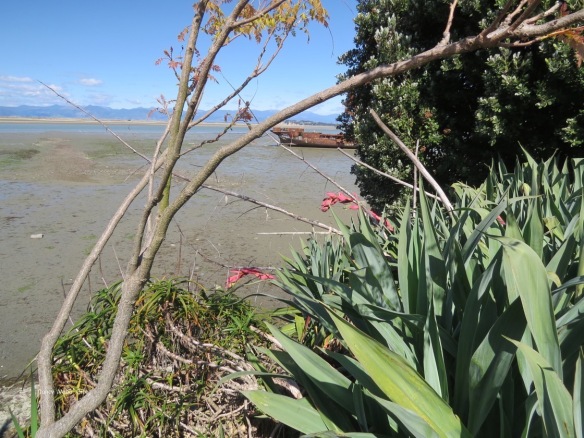 We’d had lunch at the Jester House and were due to meet Viv for coffee at Toad Hall  – popular local names! – but were late for the latter as we discovered a huge local ferry in a shipyard, being prepared for relaunching. This was the ferry on which a wedding party travelled from KeriKeri to Mapua the day before Penny went missing last year. It was awesome watching the huge monster being manoeuvred by a single tractor, with one other called in temporarily when everything got bogged!

Also spotted; a sad little fishing boat which will not be putting out to sea again.

Grouch 1: While in Nelson one morning I spotted a Beads shop and thought they might be able to fix a bracelet of mine so we went in – or tried to. A sign said Open from 10 am and it was about 9.45 then, so we took ourselves off for a not-really-needed-coffee and returned at 10.20. Still closed. We then went to the nearby Tahunanui Beach and had a lovely walk with Penny on what is surely a doggie paradise populated by any number of well behaved dogs. One in particular intrigued us, a foxie very similar to Penny but tan and white only.. It took us about a year to find our tricolour Penny and we never saw any tan and white advertised in that time. The owner confirmed she had been “difficult to find”! did not have my camera with me but managed a shot or two when we got back to the ute.  Back to the Beads shop, Open but nobody in sight and after hanging around for ages we took off in disgust. Maybe the owner was having her hair done at the next door shop, but she would have seen us hanging around surely. So my bracelet will have to wait for Christchurch.

Grouch 2: Speaking of bracelets, both Dave and I have MedicAlerts. We got these because we both have cochlear implants and in the event of a serious accident not only should we NOT have MRIs but if the external parts were dislodged it might not be obvious that one or both of us were totally deaf. The idea is that anyone finding us can phone the number on the MedicAlert emblem and quote the membership number and have immediate access to our medical records. BUT 5 months after joining I still cannot access my so-called Manage My Health account where my medical details are supposed to be found, and this despite many emails to MedicAlert and repeatedly changing my password at their request even though it is more likely the membership number which is at fault. I am getting fed up with this!!

We had a look at a couple of Show Homes while in Richmond. We now have a huge showbag of brochures and booklets from nearly all the big home builders, all with similar offers and as far as we can make out similar prices. I still hanker for a totally eco home though. The main stumbling block is not so much cost (that will come!) but finding some suitable land. Like Blenheim, Richmond and Nelson are undergoing a building boom, new home sites are being snapped up at an alarming rate, and the higher up the hillside the better the view and of course the higher the cost.

We drove back to Christchurch via Murchison, Reefton (2 nights) and the Lewis Pass. The gorse is ablaze everywhere, I wonder what the early Scottish immigrants would think if they could see what has happened with their importation which was intended for stock feed only – but the cattle preferred the soft NZ grass which is why the gorse is now so rampant. 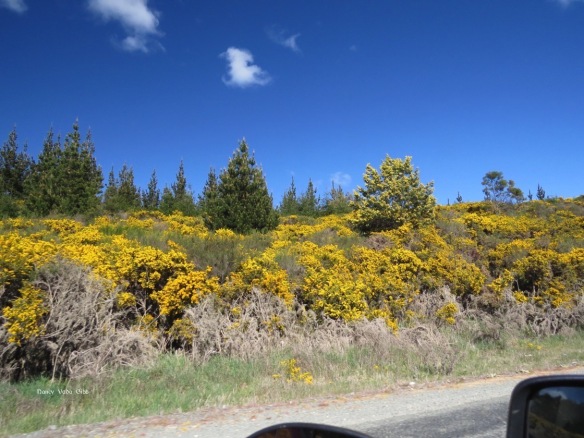 I’m not sure why I like Reefton, considering the first time I visited the town was in the depth of winter and I was fresh from Australia. But in spring it is a pretty place, the main road north is lined with blossom trees and there are so many quaint old buildings, particularly the court house (which we visited on an earlier trip). 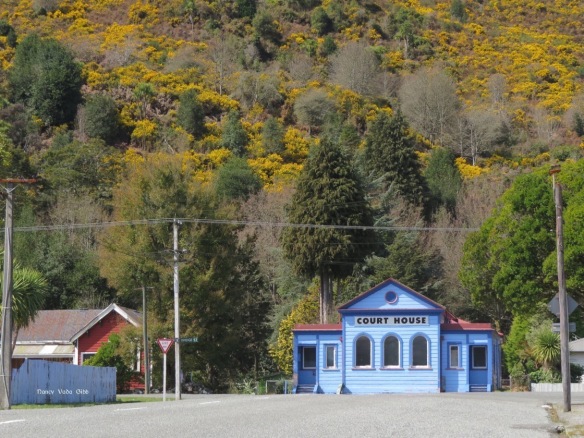 There also seem to be a number of friendly goats, including one in a paddock opposite T5, standing in a ‘field’ of aged cabbage leaves – maybe he is hoping I’ll give him something a little different. This one was at the entrance to the town.

The air s full of the smell of burning coal – rather a comforting smell actually which takes me back to my childhood and steam train trips from Sydney to the Blue Mountains. We stayed at a POP site which caught the evening sun beautifully and gave a view over the town. 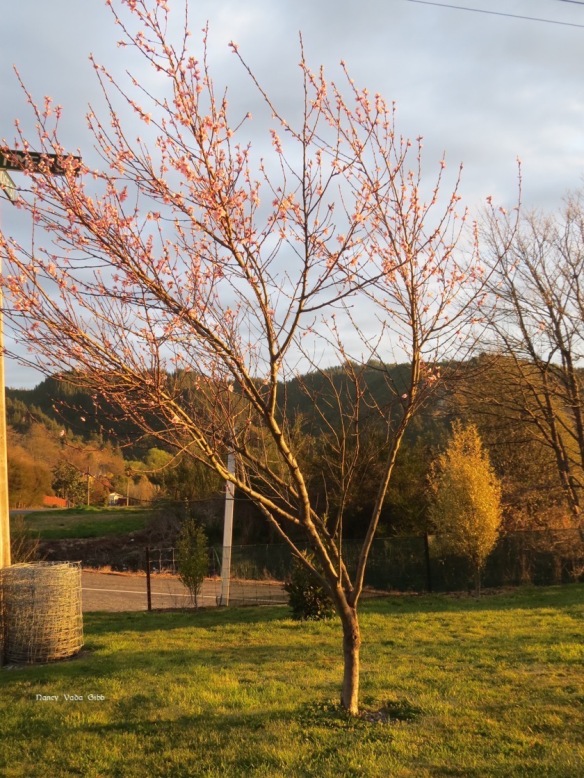 We hadn’t planned to stay there 2 nights but the second day was so pleasant that we did. In the afternoon we drove a short way south and discovered some land for sale, complete with a cottage of sorts … here it is. A very desirable position perhaps.

A little further on towards the town we stopped to investigate the swing bridge which takes one over the Inangahua river and to the site of an early power station. The area is just so rich not only in mining history but in the history of electricity in NZ – Reefton was the first town in the southern hemisphere to establish its own power station. Penny was not so keen on this swing bridge…) 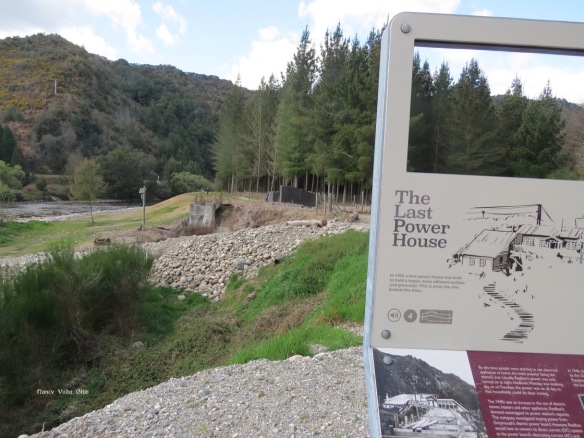 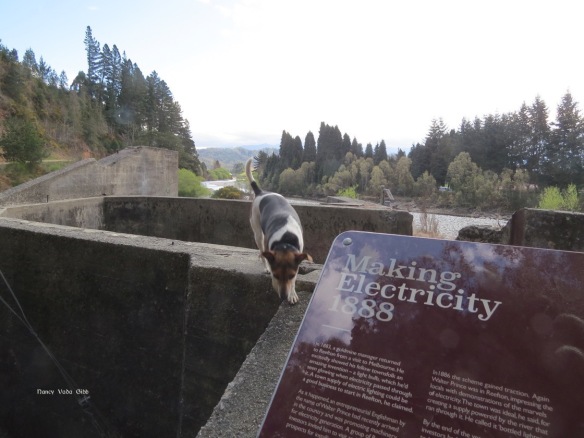 Back in town we found an old steam engine, wedged between a skating rink and a heated swimming pool on ‘The Strand’ (!). Signs told us that this was R28, an articulated locomotive ‘designed to cope with tight curves”. It has a long and convoluted history and is one of only two genuine single engine Fairlie engines in the world. Sadly it does not seem to have been looked after very well. 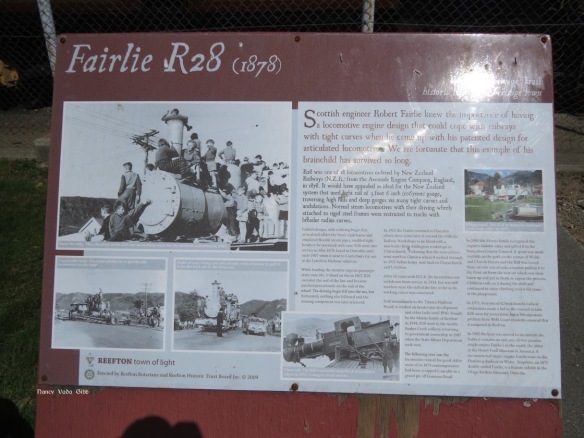