We made it! Cooktown, the most northerly place we hoped to reach on this six month tour of eastern Australia.

Here’s an enlarged piece of the map from the last blog.

The white ‘road’ (Burke Developmental Road) from Karumba to Cairns via Dunbar (take note Nic’n’Mick! – it’s at the highest point) and Chillagoe tempted us but it is not all surfaced and there is no diesel available en route. We are sadly not equipped for that sort of outback adventure. It goes close to Mount Mulgrave station where Evelyn Mansell lived in 1912-1918, so graphically described in the wonderful book “S’Pose I Die” by Hector Holthouse. Highly recommended reading.

The road from Mareeba to Cooktown, the Mulligan Highway (shown in purple), took us nor’west from the relatively dry savannah grasslands of the Atherton tableland, through the old mining townships of Mt. Molloy (copper and timber) and Mr. Carbine (wolframite; the town was named after the Melbourne Cup winner), and then finally north east to the coast. Along the way we stopped at the Palmer River Roadhouse where Dave ordered the Mighty Palmer River Steak Sandwich which for $15 boasted of containing “steak, bacon, egg, pineapple, onion, cheese, lettuce, cucumber, beetroot, tomato and carrot”. Not the best steak sandwich Dave has ever had. My order was much more modest. 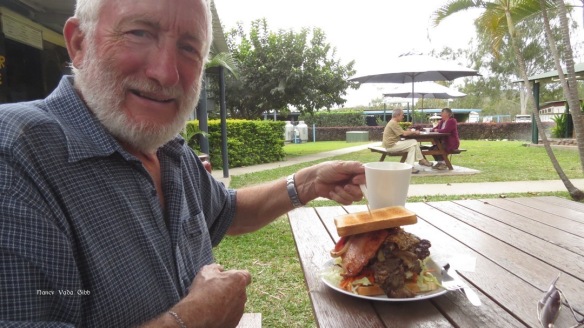 To my surprise there was a little local museum in the roadhouse and it held a genealogist’s unexpected treasure, a rate collector’s record of everyone in the township in 1880. Historical records of many of the families named have been collected and displayed. 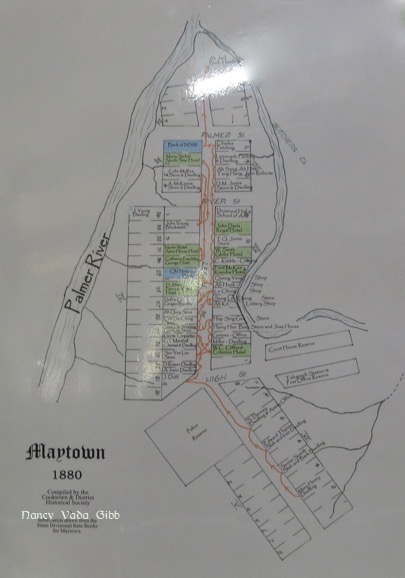 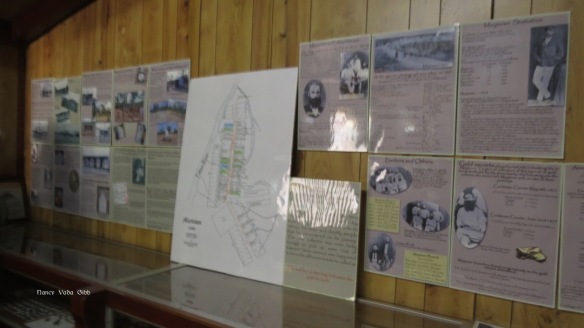 We came to the Byerstown Range, a steep climb with an amazing but too-misty-to-be-fully-appreciated view of the land to the northeast…. 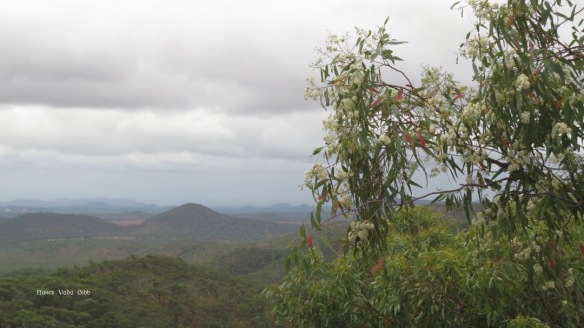 ….. and looking back south.

Grandy and Westie looked so nice and shiny, a state which was not to last much longer. 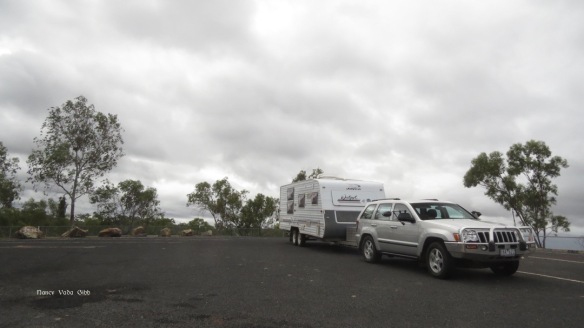 A sign reminded me just how vast the country is ….

Downhill again, then while still 28 km from Cooktown we came to an astonishing sight – what looked like huge mountains of black mine tailings or rubble, very curious after many kilometres of well-wooded savannah land. It was indeed a special place, which the signs told us marked the northern end of the Wet Tropics World Heritage Area. 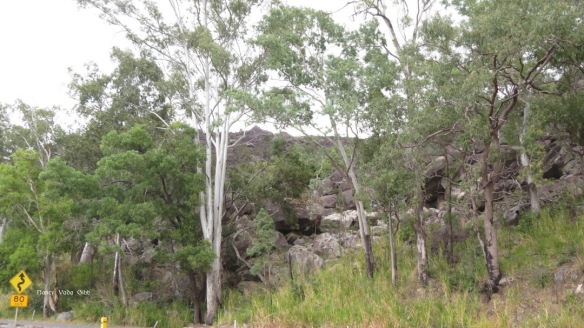 it was like that on both sides of the road. 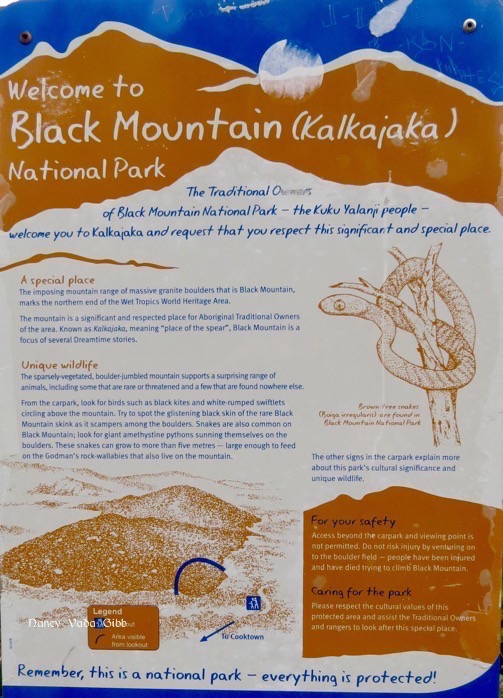 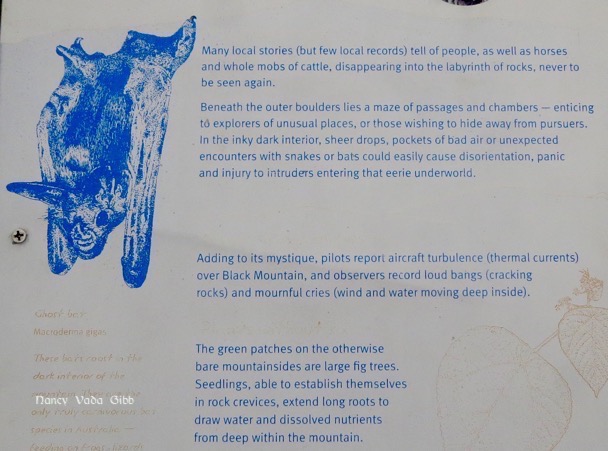 The nearer we drew to the coast the more tropical the scenery became. There were more creeks and rivers to cross. 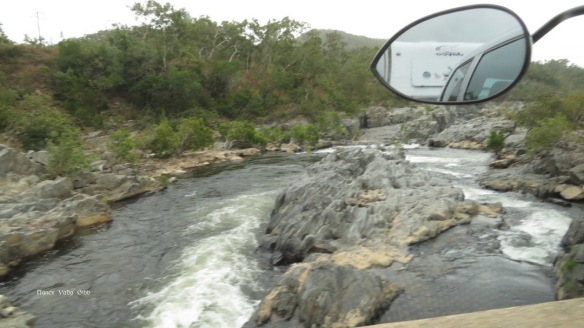 And so to Cooktown. The Endeavour River, where Captain Cook beached the “Endeavour” and made repairs, goes through Cooktown and meanders north. We were camped on a private property, the ‘Endeavour River Escape’ on the banks of the river about 5 km out of town. It is an environmentally certified working farm breeding Clydesdales and growing Red Panama Passionfruit, with good amenities including hot showers, the water being heated by a fire and/or solar. There was no WiFi, no TV reception, not even mobile reception. 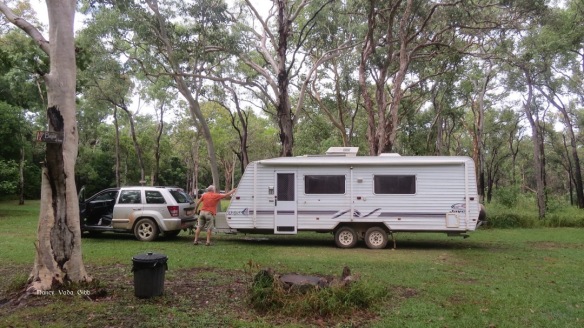 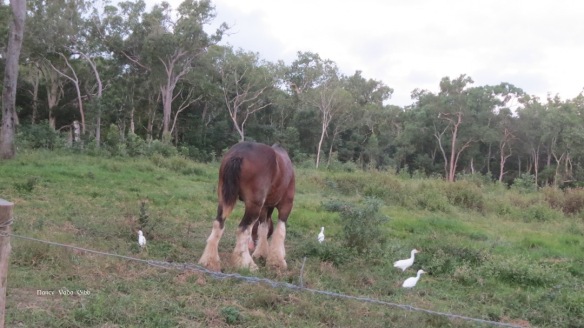 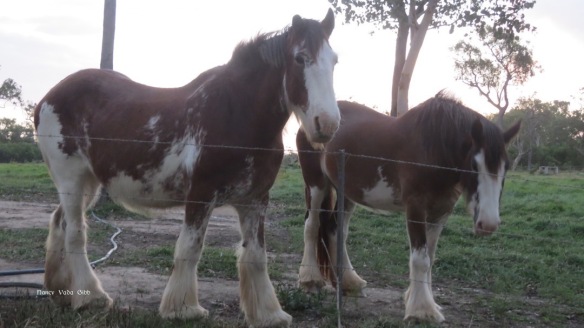 A few minutes’ walk from our campsite took us to the river. We’d been warned not to go beyond the barrier … crocodile country!

Yes it did rain .. it’s a wet rainforest area (!). Green ants were everywhere but did not give any trouble. This is not a green ant but a cute little bug which tried to hitch a ride on the car. Dave also spotted a few spiders.

More about Cooktown in the next blog. I’m trying to keep the blogs shorter I can post them more quickly.

2 thoughts on “159. The Mulligan Highway to Cooktown”