I thought Karumba deserved a blog to itself. We did not tow Westy the caravan there, as we had heard all the camps were full, and we were happy at the Normanton camp with its wide spaces and good facilities. As it turned out we could probably have squeezed into one of the Karumba camps, but no matter. It’s only 70 km one way …. and we ARE in the outback. What’s more we did the round trip twice (!)

Along the way we hit another river which featured in the 1971 MGTF trip. Walker Creek on the Karumba Road … 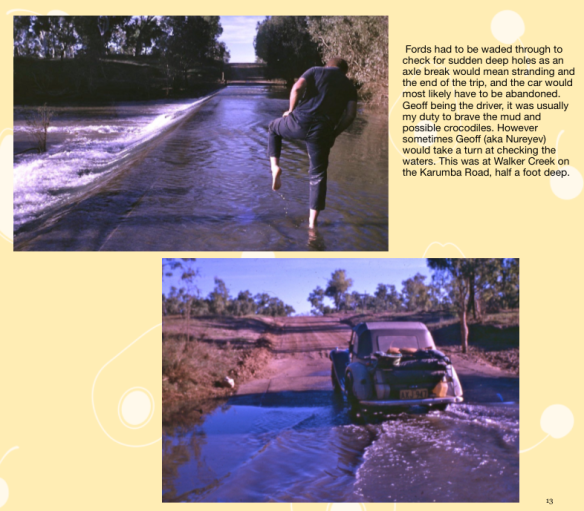 …. and again now with the usual huge high modern bridge. 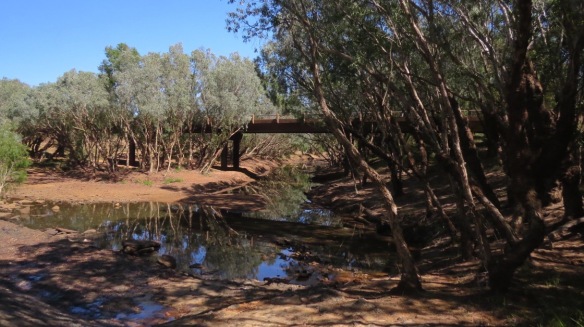 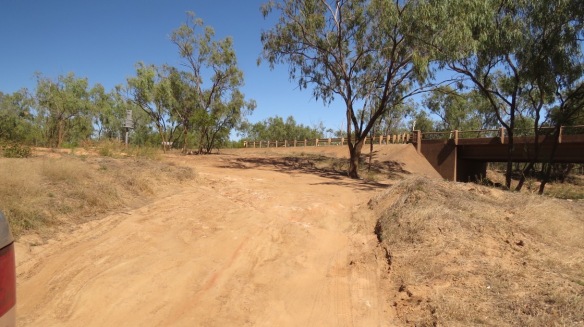 This is the river crossing where, for once, Geoff braved the crocs instead of sending me across first to feel for cracks and potholes, just like this one….

On one side there was a clearing beside a sort of waterhole which people obviously used for swimming, with a swinging rope – and sign warning against swimming because of the crocodiles. 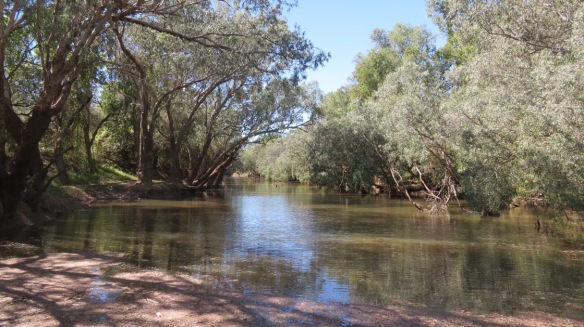 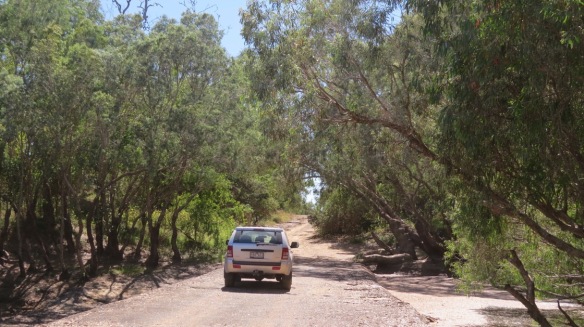 On to Karumba across a huge flood plain. There were lots of brolgas, almost always in pairs, no doubt attracted by the semi-permanent waterway which ran beside the road.

(Was this the one I photographed in 1971? – and yes thats the main road between Normanton and Karumba!)

There was also a large number of kites no doubt attracted by the plentiful roadkill, almost all little wallabies. Sad. 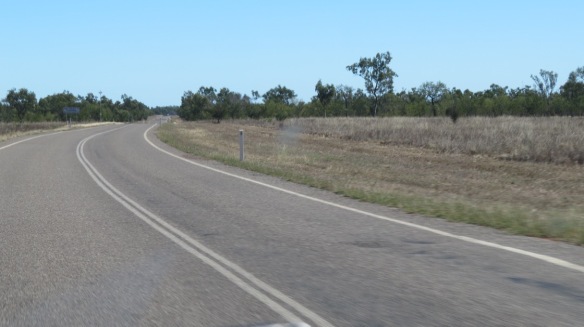 The Karumba Information Centre is modern and well-stocked with brochures and helpful volunteers, who suggested where to go for a prawn lunch, item number one on our list. This was at Karumba Point, where there is a sandy beach but as usual there were signs warning about swimming or even paddling. 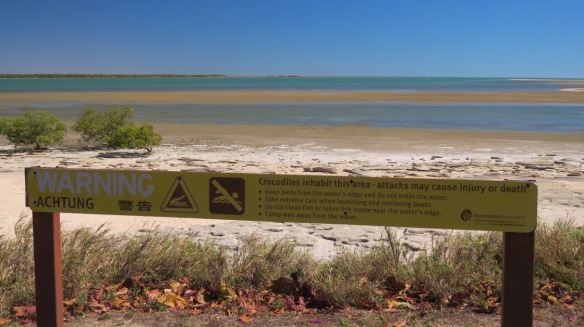 We decided to try a sample platter, prawns five ways for $35, and one platter was enough for the two of us. Well, almost.

We sat outside under a huge tree which we later found out was a Beach Almond  </www.naturesface.com.au/native-almond-tree/> and watched a prawn fishing boat – or was he after barramundi? heading out to sea with several smaller boats in attendance. 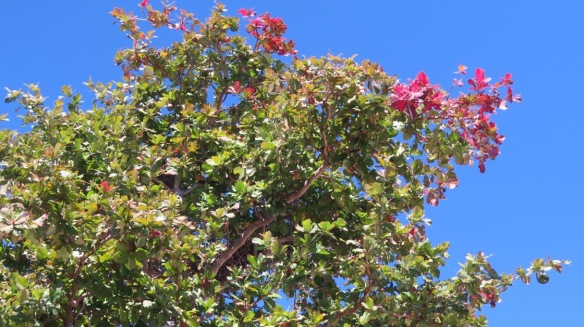 There used to be a jetty at Karumba Point.

This was most likely the jetty Geoff and I saw in 1971. Note also the Burns Philp store mentioned in the previous blog, now beautified.

Karumba prawns are legendary. Yet the industry only started in 1964 when a local fisherman Noel Sykes, after some 981 tries, brought up the first full net of banana prawns, winning a magnum of champagne which had been offered as an incentive for the first skipper who landed a substantial catch. The Northern Prawn Fishery is Australia’s most valuable Commonwealth fishery and is considered one of the best managed fisheries in the world.

The popularity of barramundi was also everywhere. A Barramundi Discovery Centre was established in 1993 by some local commercial fishermen where they have bred and released  hundreds of thousands of barramundi fingerlings “for the long term benefit of the environment, commercial and recreational fishers”. It was not open when we were there.

A look around the wharf area turned out to be far more interesting than expected. To start with, we wondered what the tides were like as the wharves were on very long stilts. We discovered that there is only one tide a day.

i had not known that Karumba was once an important flying boat base.

The commercial flying boat services ceased during WWII when Burma was captured by the Japanese. the Royal Australian Air Force took over the facilities as a Catalina base. A concrete ramp and large hangar are built in 1942 to service the flying boats. 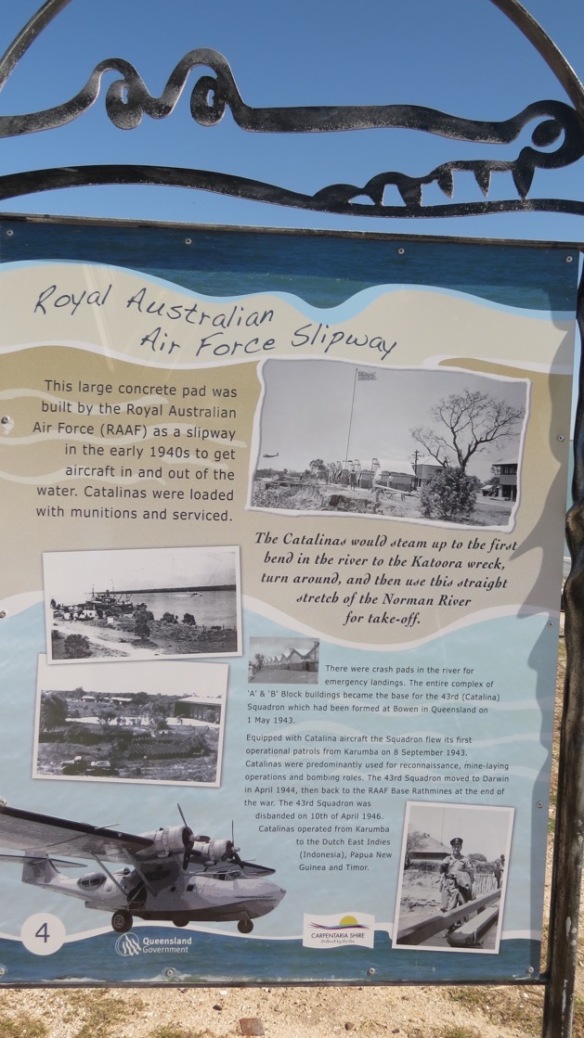 This is the straight stretch of river used for take-off.

One other series of signs captured our attention. There was a huge flood in 1974, the largest on record. The entire township had to be evacuated and hundreds of square miles of Gulf country were inundated. 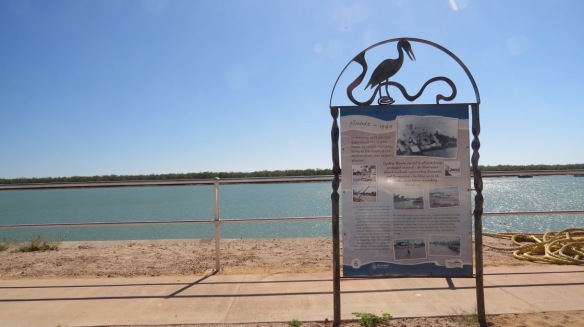 After a look around town we bought 1 kg of prawns for dinner, booked for a sunset cruise the next day and returned to Normanton. That evening one of the camp people came round to invite us to the free prawn and drink and movie night the next evening, so we phoned Karumba and postponed our sunset cruise till the following  evening – “no trouble mate”.

We were absolutely sated by the time we’d got through 2/3 of the kilo of huge prawns, two sauces,  a french bread stick and of course plenty of Sav Blanc. Sitting outside in the warm dusk, the sky glowing red behind us, what could be better? The rest of the prawns we had for breakfast as garlic prawns on toast. (No photos, fingers too sticky!!)

On our second visit to Karumba we discovered a few more things, like Bunratty Castle.  He moved the bricks four at a time  …?? 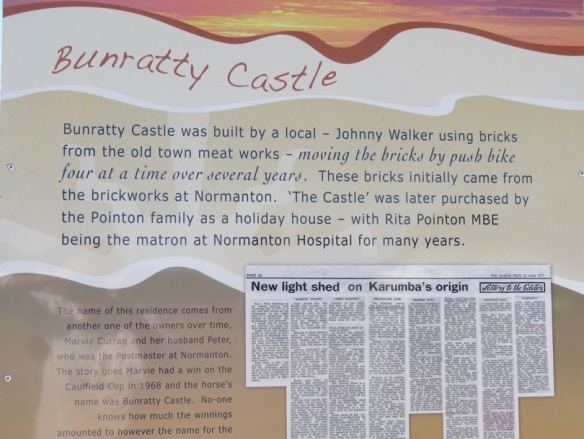 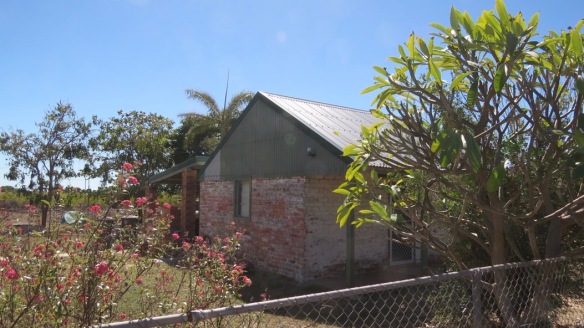 The finale for our Karumba visit was the evening cruise. We had a lovely time with some congenial people and a very knowledgeable guide and would strongly recommend Ferryman Cruises to anyone going up that way. We boarded near the RAAF base and cruised slowly upriver, but not before our guide had fed some of the kites which were wheeling around …

..  we soon saw a jabiru, a gorgeous big bird (‘the Australian stork’) and then visited a short-tailed crocodile enjoying the last rays of the sun beside its nest. 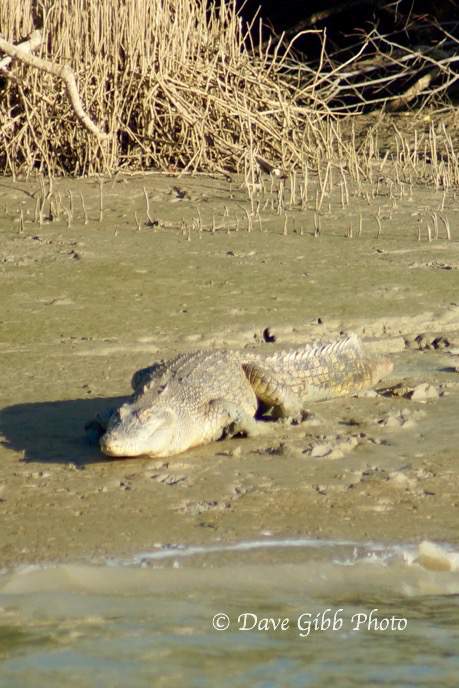 Then it was back down the river and out towards the entrance. The boat started to rock just a little – hooray! Drinks and nibbles were handed out followed by small plates of fresh prawns. Everyone was taking photos of the sunset, and themselves. There was not a cloud in the sky but the horizon glowed fiery red for ages. 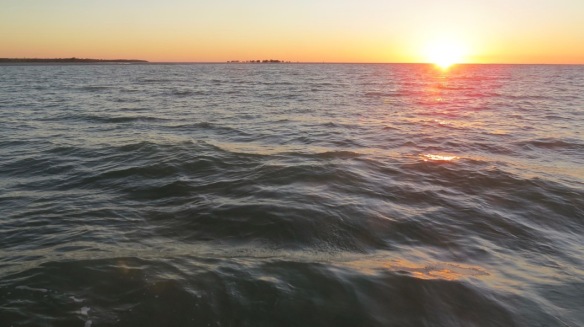 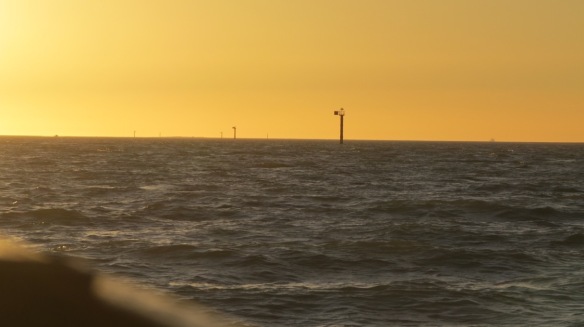 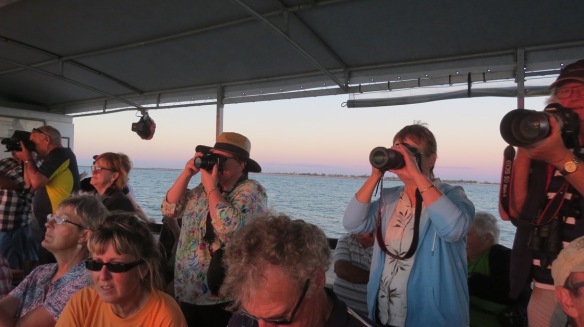 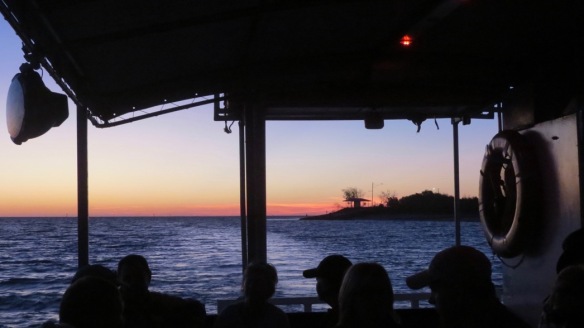 Then the drive back to Normanton in the dark, a bit slower than usual, all senses alert for pesky wallabies who had not learnt right-of-way rules. We saw quite a few right beside the road but they just sat and stared. Our lovely bull-bar is still pristine but we were glad we had it.

This is the turning point for us in Queensland, from now on we will be heading east rather than north and west.