On the way to Normanton I was keeping a sharp eye out for the Flinders River, which Geoff and I had crossed in the MGTF in 1971 with some difficulty. (See Blog 141 – An Earlier Tour of the Outback).

What I wasn’t prepared for was the enormous new bridge – and the size of the little floodway which we had negotiated with some trepidation all those years ago. Foolhardy perhaps but we were young and invincible (?).

My camera batteries were both flat by then, they are one of the few things we can’t recharge on the road, so Dave took all these photos starting with where we left Grandy and Westie parked beside the highway and walked back towards the new bridge. Note the new flood signs on the left (relative to flood height above the new bridge) and the old sign in the third photo. 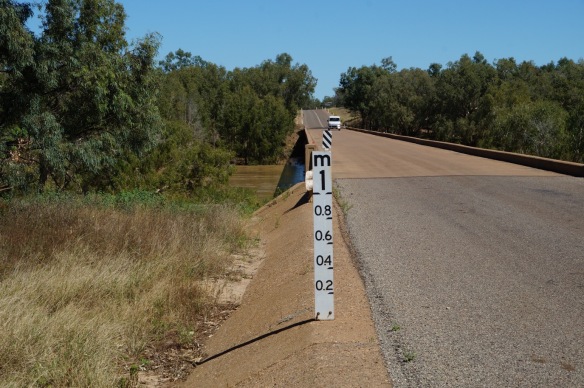 The old floodway was nearby, with a free camping ground at the top of the hill. We were tempted, but pushed on to get nearer to Normanton and a camp with power and water so we could recharge everything and have some showers. 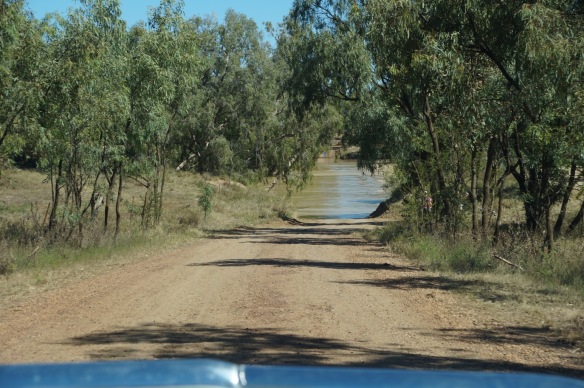 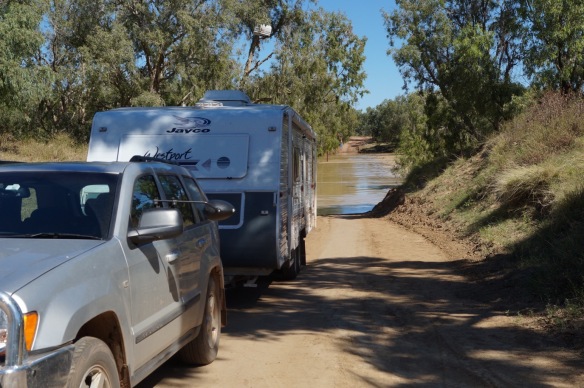 We’d been concerned about all the campsites at Normanton and Karumba being reportedly chock-full but discovered the newer one on the southern outskirts of Normanton had plenty of room. Initially we booked in for two nights but found ourselves staying for five. That included two day trips to Karumba (next blog) and an interesting train ride. 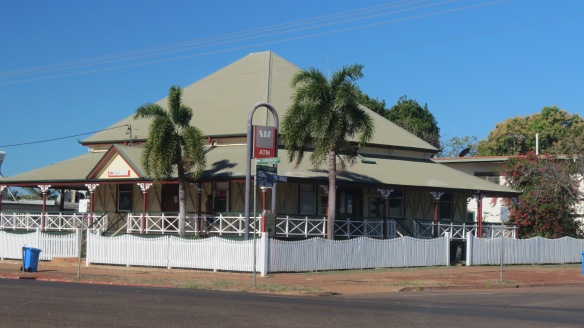 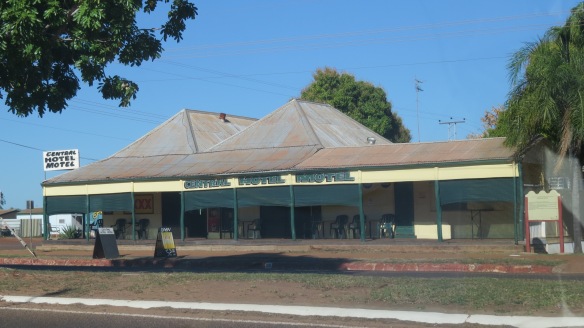 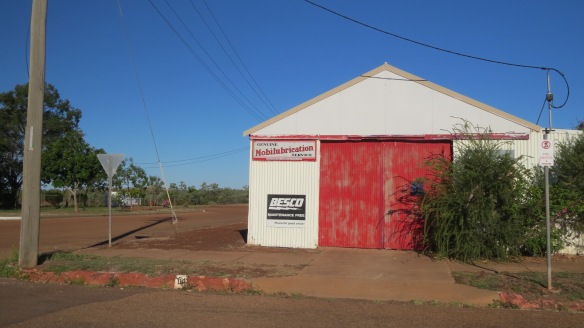 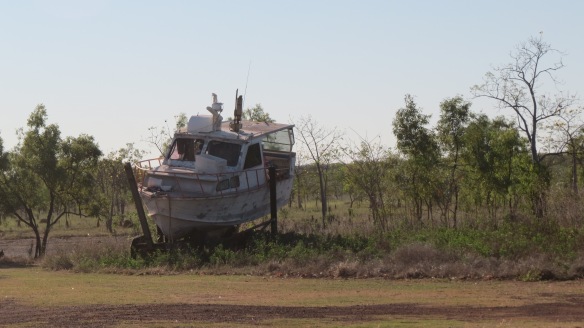 It was obvious that the local residents (mostly) took great pride in their town. Apart from the usual notice boards explaining historical features – which seem to be in just about every country town now, at least those on the main tourist routes – old buildings have been spruced up and native plantings are everywhere, but particularly around the old Burns Philp store ….. 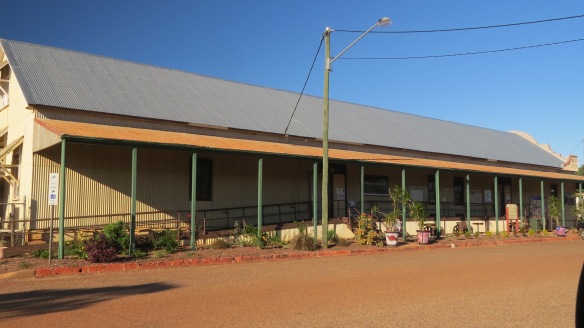 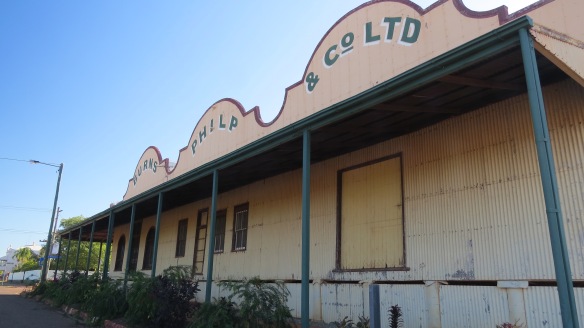 …… and the railway station. 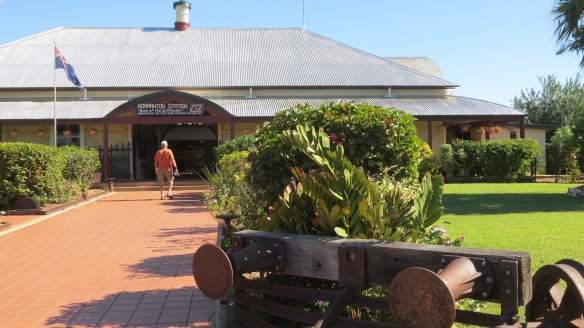 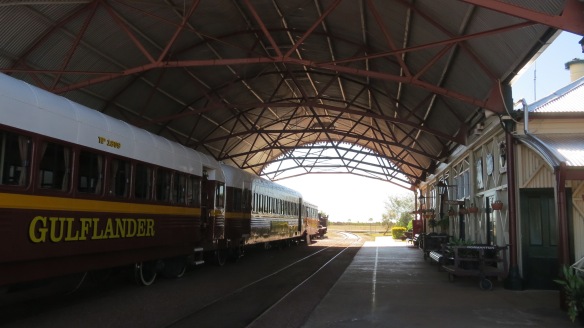 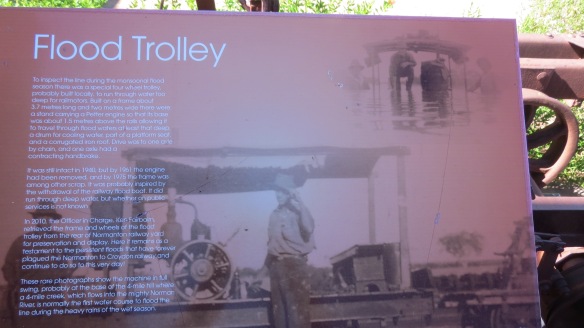 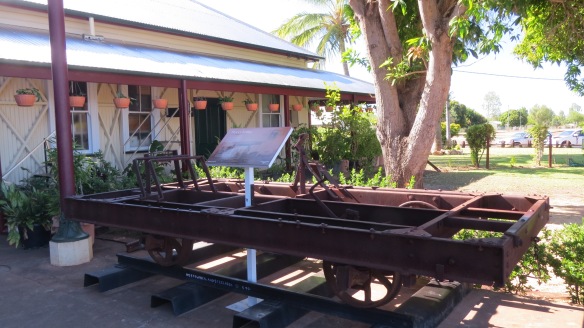 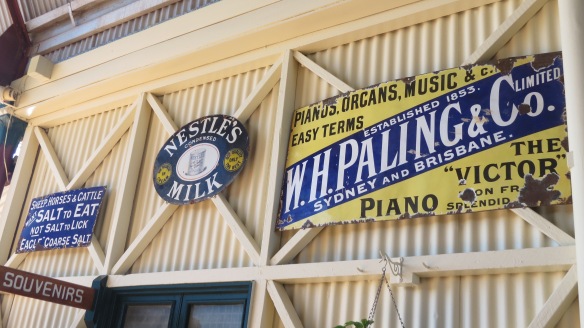 As in NZ, many towns have a large ‘something’ – mango, salmon, pineapple, L&P bottle – not to be outdone Normanton has a huge crocodile. It is a full sized model of a croc shot some years ago by local  woman Krystina Pawlowski. We were to learn more about her later. 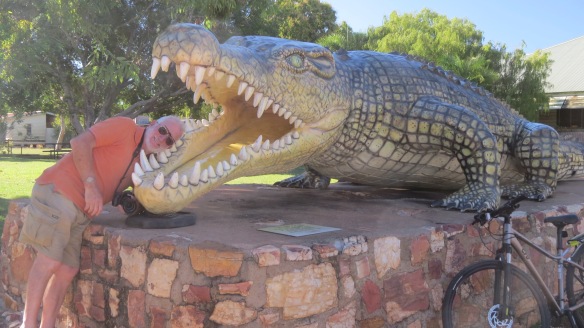 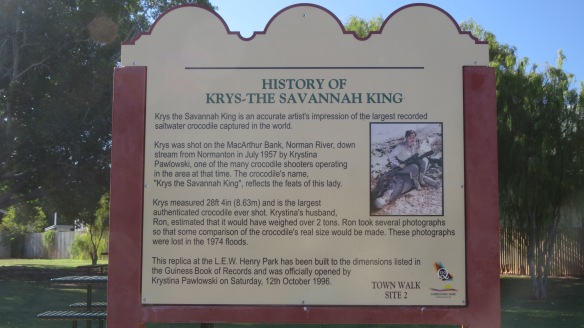 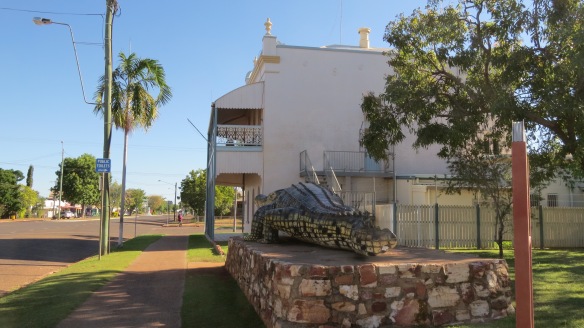 The old jail and trackers’ quarters.

Here’s a road train parked in the main road through town, between one of the historic pubs and the bank. The main road is very wide indeed – as in other country towns presumably so bullock trains could turn around.

One morning we managed to get up in time to catch the 8.30 am Gulflander ….. Here’s Dave’s story.

We have been hearing about the Gulflander for quite a while with several people recommending the trip just for fun. The original railway was supposed to be built between Normanton and Cloncurry but when gold was discovered at Croydon shortly after construction started, it was decided to divert the railway there. Built on a system using steel sleepers instead of the usual wood to frustrate the termites and white ants, the low profile of the lines also allowed flood waters to wash over them without doing damage.

We arrived at Normanton a day too late to do the full trip from Normanton to Croydon and return but were lucky enough to find that there was a short trip scheduled to Critters Camp and return on the Monday after. We were at the station in plenty of time for the 0830 start and I was amazed at the number of people waiting to board the train, it seemed to be a pretty popular thing. The train itself consists of the motor unit and 2 carriages, the motor unit is built on in AEC bus chassis and has about 20 seats and the carriages look to be standard Railway type carriages. 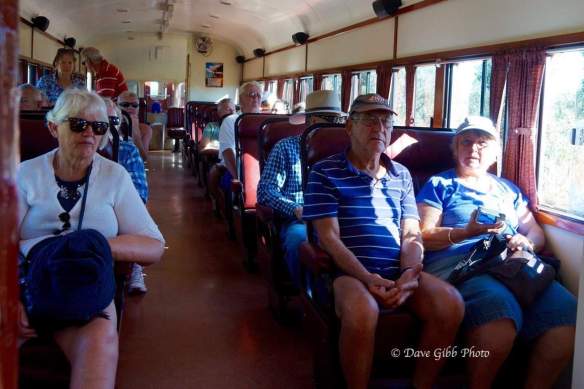 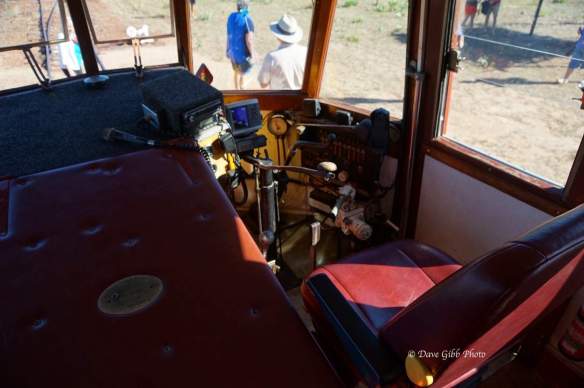 These were all built at the Queensland railway workshops in Ipswich and refurbished in the 1960s and are still in remarkably good condition today. The line itself uses a very light rails more like a tram-way and the ride was very interesting, I’m not sure if my father would be horrified or amused but I’m sure he would have been able to give them some tips on how to smooth the ride out. 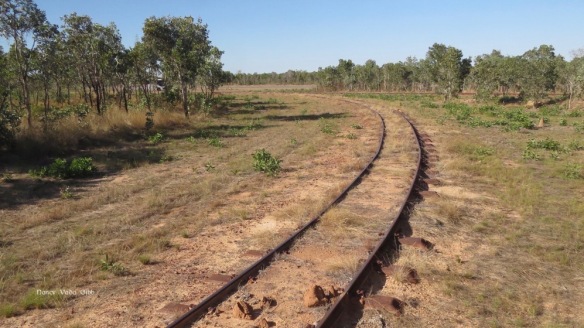 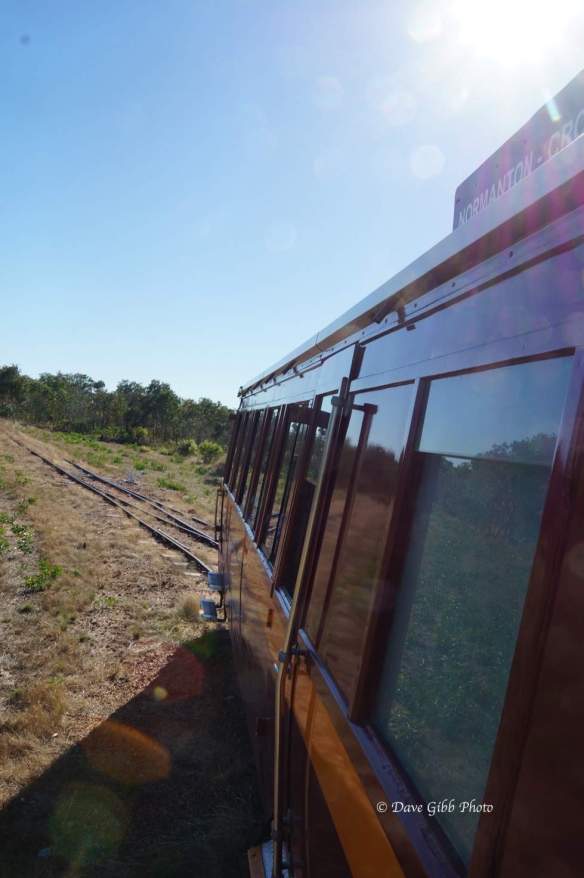 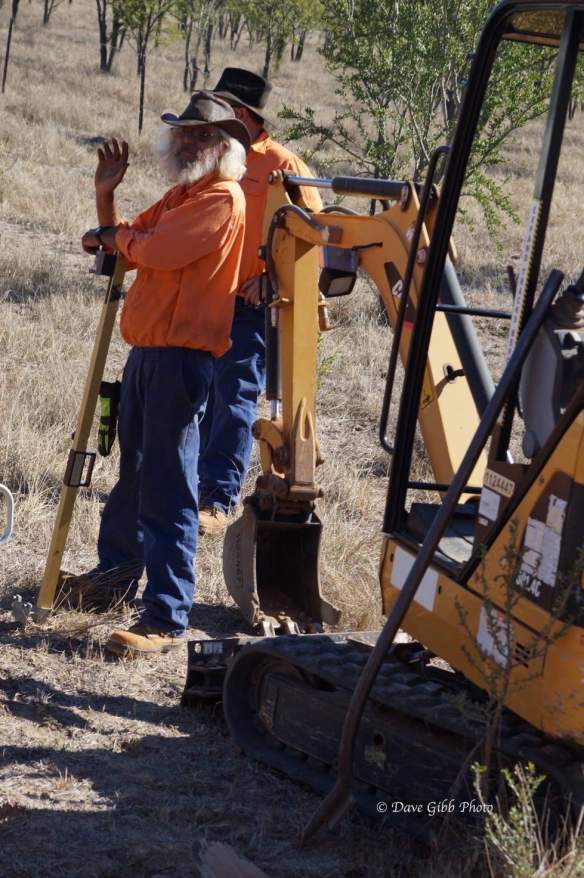 We had a great morning out anyway on a very interesting trip and a good commentator. The marker showing the flood levels for various years was astonishing….. 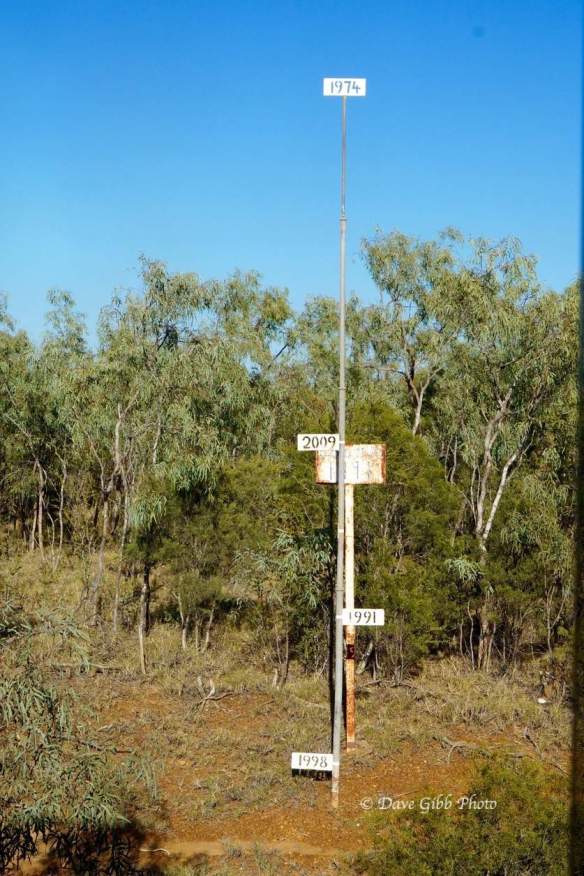 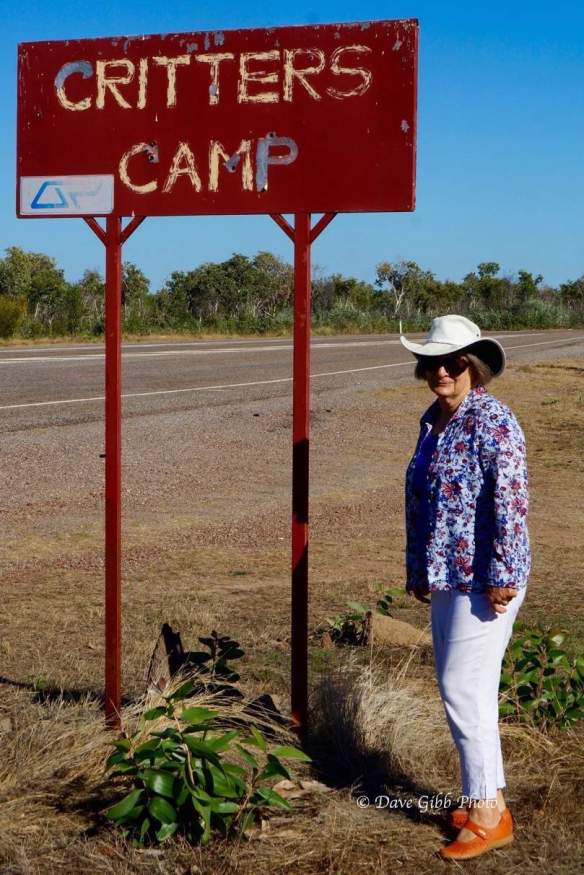 Nancy: Much of that rail trip was over a vast floodplain, the soil was sandy and the anthills were smallish but very numerous. The Norman river looked quite different from the train. 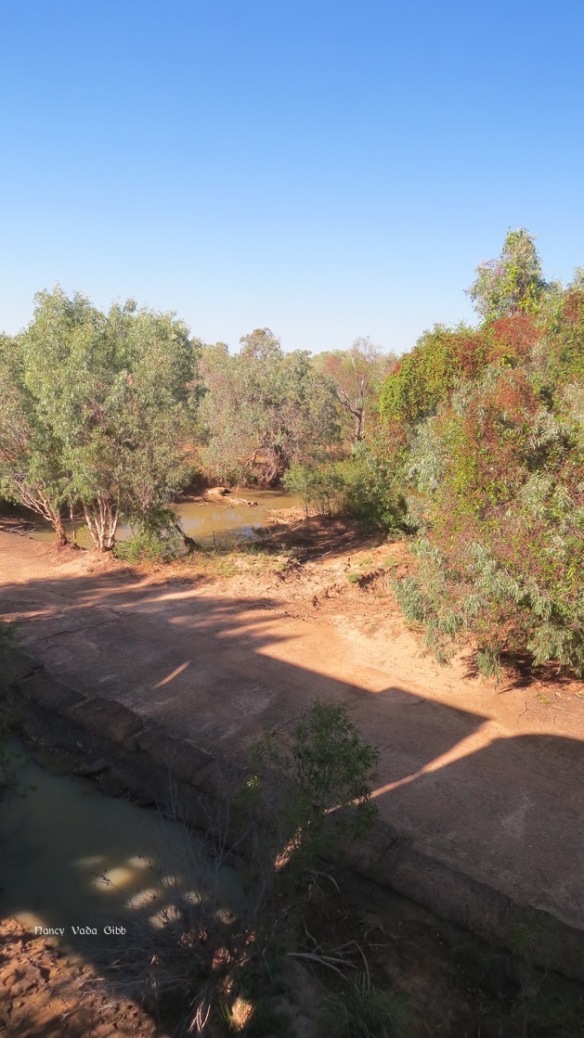 And the rail bridge also looked different from the road next day.

Arriving back at Normanton:

That afternoon, leaving Westie behind, we drove 33 km down a dirt track to visit Burke and Wills’ Camp 119, their second-last camp. Throughout our travels around western NSW and Queensland we’ve been coming on more and more mentions of Burke & Wills, maps of their journey, artefacts (like a waterbag at Cloncurry) and monuments (like the highway rest on the way to Mt. Isa). But this particular Camp 119 is of particular importance. Plus I’m a bit of a tree-hugger 😉 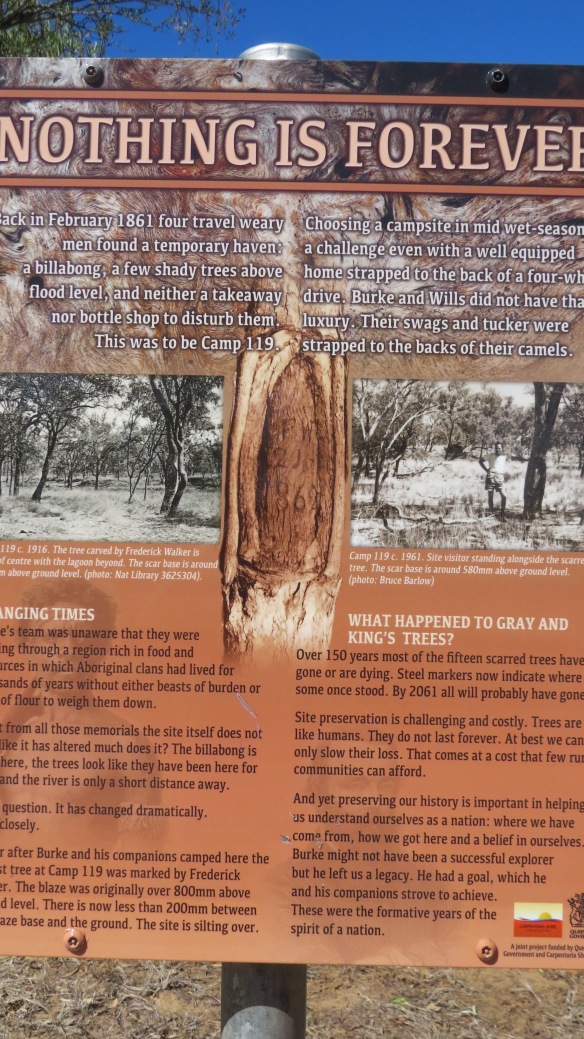 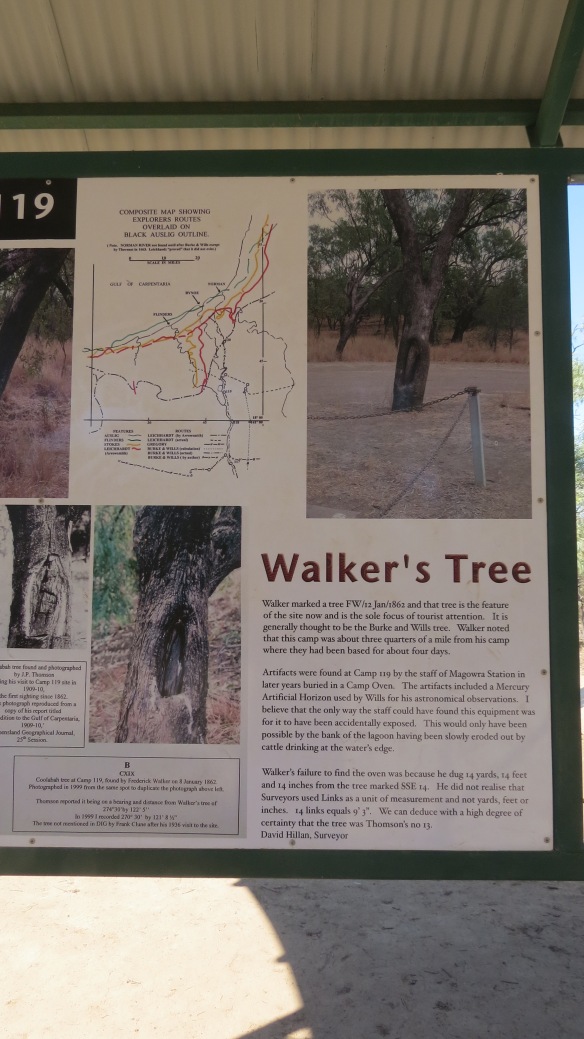 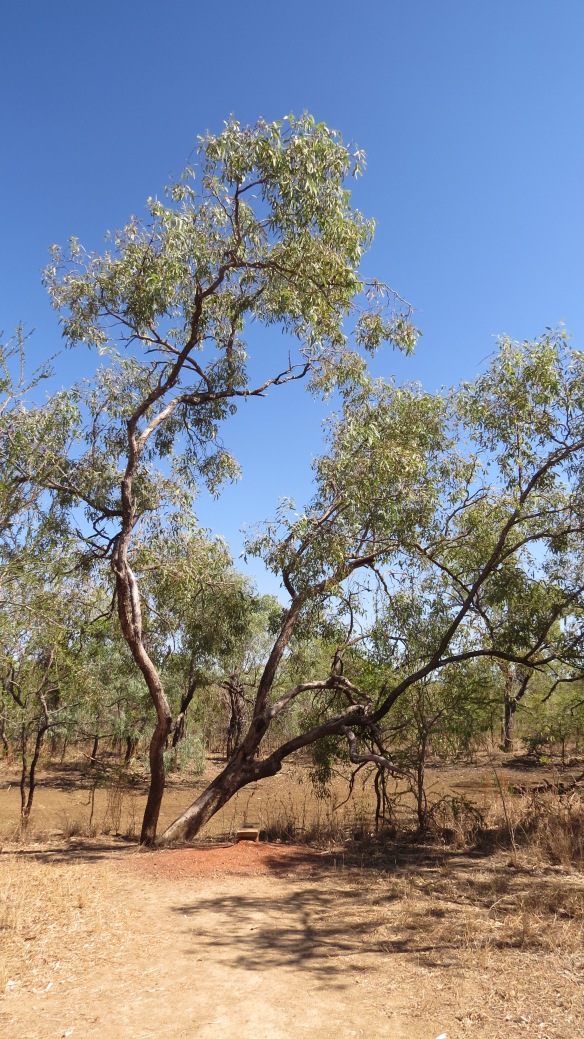 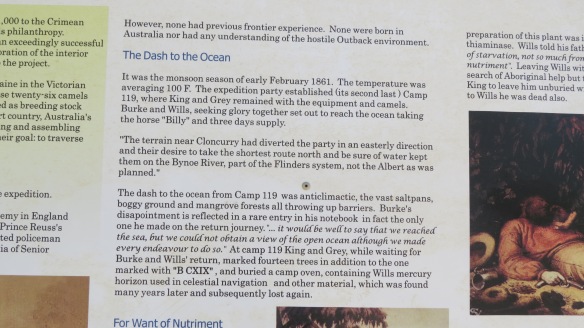 We delayed our departure from Normanton for one more day so we could attend the prawns and film evening at the camp. A free plate of Gulf prawns, a free drink and a chance to see an old film about the local woman crocodile hunter Krystina Pawlowski – who could resist. The film was an old black and white one produced by her husband, and there were some quite hilarious staged ‘scenes’ – e.g. in demonstrating her care of other reptiles we saw her driving along dirt road, a snake appears, she stops, and lo and behold emerges from the big dirty truck in a pretty flowered dress (with a rope petticoat?), tenderly lifts up the huge python and puts it by the roadside. In another scene on her small boat, after we’d just seen her wading around in thigh-deep mud and wrestling with a dead croc, she emerges from the cabin in a freshly ironed blouse holding a cigarette and a cup and saucer (yes, really)….. But other parts of the film were more serious and very interesting, showing her setting baited lines and catching a huge stingray instead and retrieving the hook and bait; hauling a giant dead croc out of the water and then skinning it, salting the skin and rolling it up very neatly and putting it with other rolls…. It was a lovely evening and of course everyone started chatting, ordering more drinks, etc etc. We were glad we’d stayed.