On one of the finer days we drove north through Balclutha towards Lawrence, trying to keep to the back roads, and a little past the bridge to Clydevale came to the Tuapeka punt on the Clutha river at Tuapeka Mouth, the only punt of its kind in the southern hemisphere. It looked fascinating. It uses the flow of the river to cross from one side to the other, with one man operating a fairly complicated looking set of ropes and one large wheel. 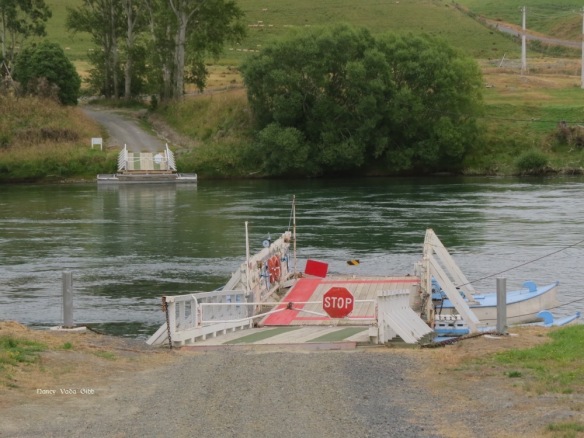 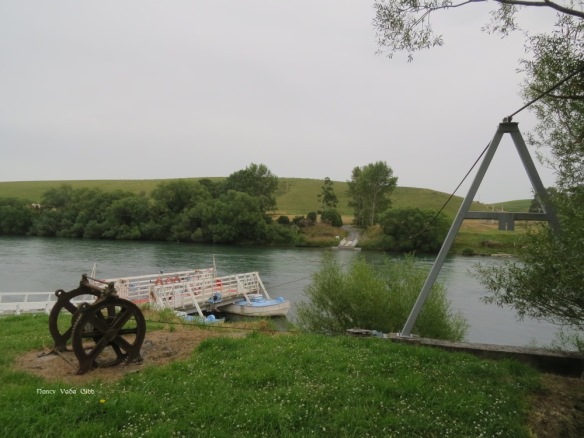 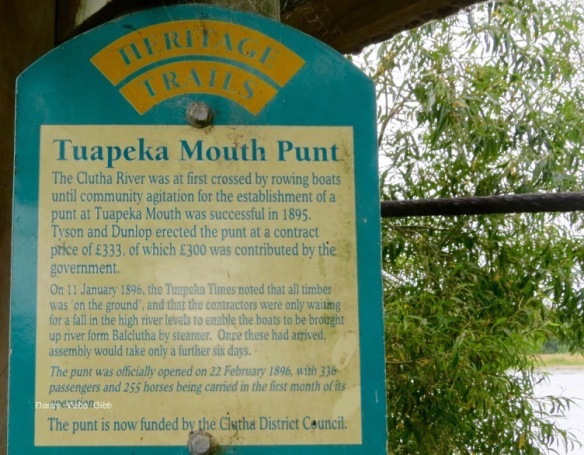 A sign advised us that the punt only operated between the hours of 8-10am and 4-6pm river level permitting. As it was then about 11 am we determined to continue to Lawrence then return via the road on the other side of the river, cross over on the punt and continue ‘home’ to T5.

The punt was officially opened on 22 February 1896, with 336 passengers and 255 horses being carried in the first month of its operation. The mind boggles. Tuapeka Mouth was an inland port for about 30 years until 1939 for paddle wheel steamers to and from Balclutha.

… and just outside Lawrence stopped to admire the site of the old Chinese Camp, founded in 1867 when Chinese were forbidden to live and work within the town’s boundary. With time the camp expanded to have about 100 people. The hotel, still standing, was said to be one of the best wayside hotels in Otago. The owner was a Chinese man Sam Chew Lain, who married a Scottish woman, and it chiefly catered for a European clientele. A Chinese ghost is said to have been known to successive hotel occupants.

Lawrence is chock full of cafes and semi-antique shops (“don’t call us junk!”) and full of lovely old buildings with olde worlde gardens.

The original gold-rush town, it was the home to school teacher John J. Woods who composed NZ’s national anthem. There’s a sort of statue of him, and several other town notables, in the main street. There’s an interesting little local museum, worth a visit. I spotted a whole banana-crate sized box full of local family histories, some obviously prepared many years ago. i wonder if any have been digitised and/or a catalogue prepared. 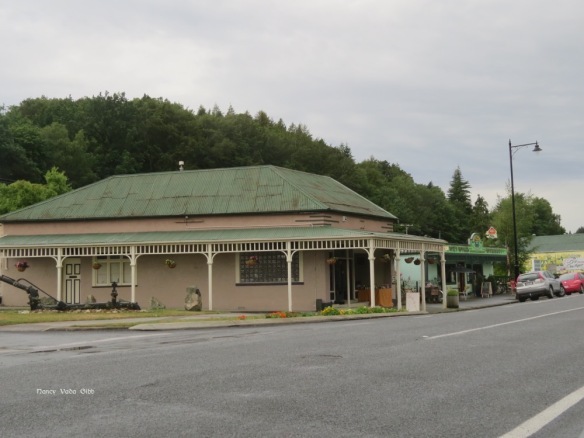 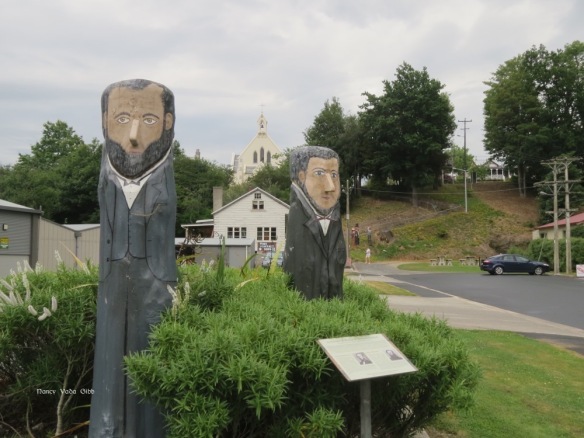 After lunch we went on a little further to Gabriel’s Gully, site of NZ’s famous gold rush. there are many walking and cycling tracks in the vicinity, and a lovely lake. 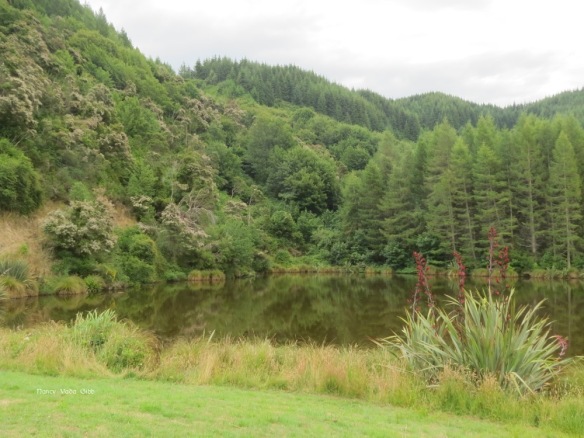 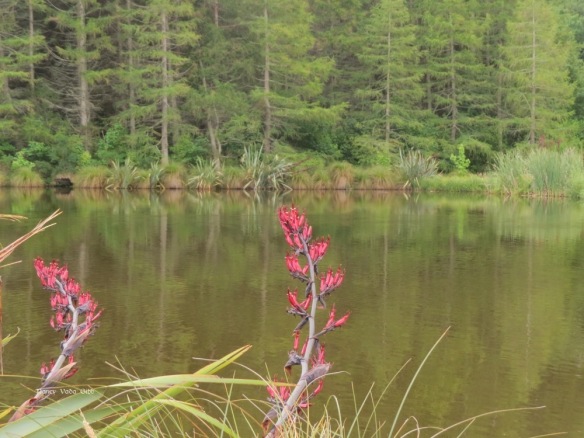 it was a little difficult, looking out over the green valley, to imagine it as it was in the gold rush heyday. Within a few months of the first discovery, thousands of mining holes chequered the valley as far as the eye can see. 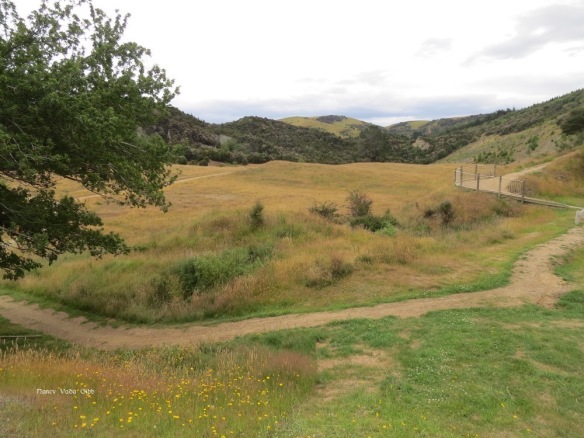 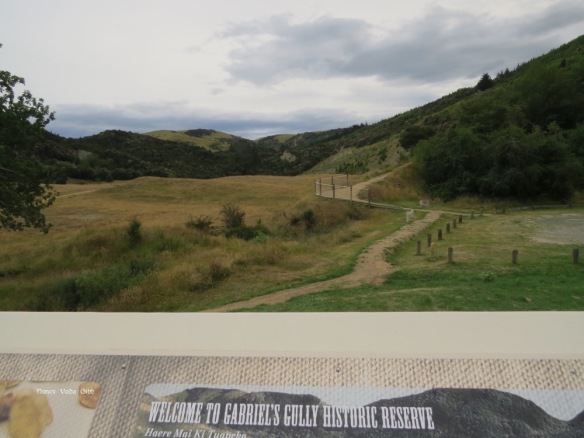 But we couldn’t wait to get back to the punt! We arrived just before 4 pm and soon saw the ferryman arrive and methodically get everything under way. We were the only passengers, just as well really, also no way could we have done it with T5 in tow. I will let the photos hopefully tell the story. The ferryman was kept busy the whole time, everything was done manually. 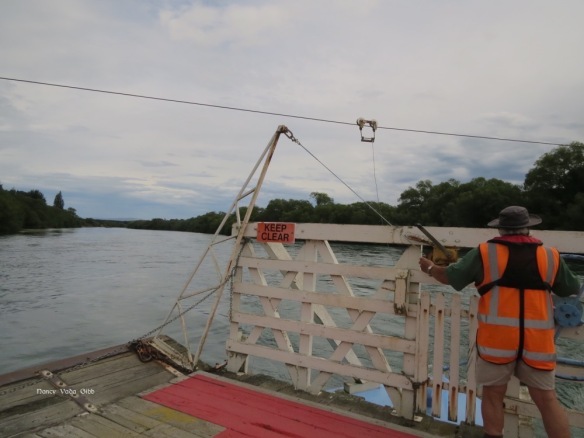 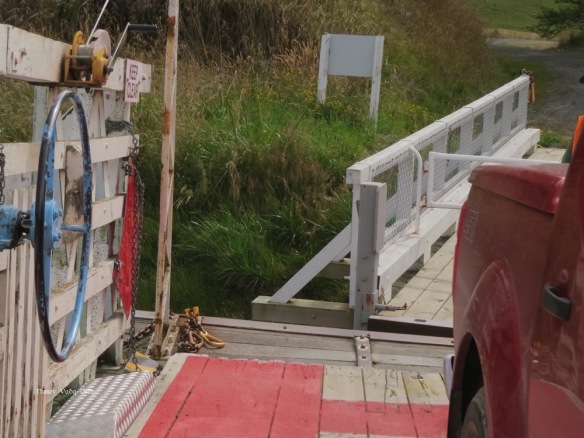