We decided to return to Geraldine via the coast road through the Catlins rather than through Balclutha, not stopping until we were nearing Invercargill and spotted a sign saying Lignite Pit Cafe. What?! It turned out to be a cafe/camping ground/gardens complex built on the site of an old lignite open-cut mine. 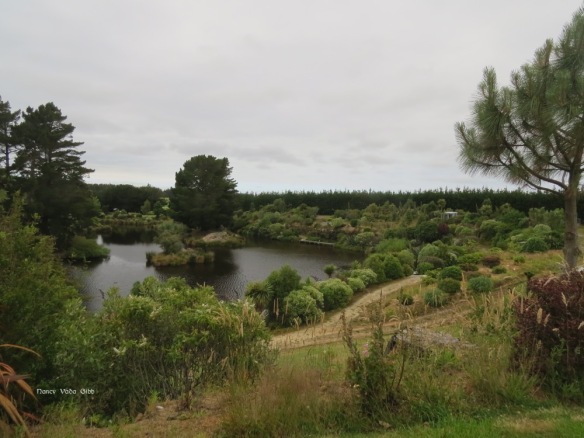 Although the cafe was not officially opened at that time we were warmly welcomed and coffee prepared. 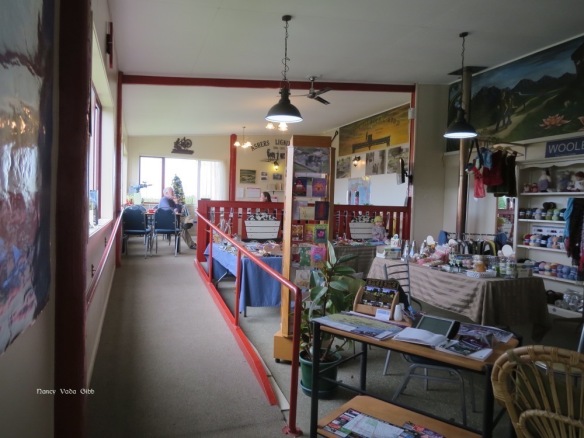 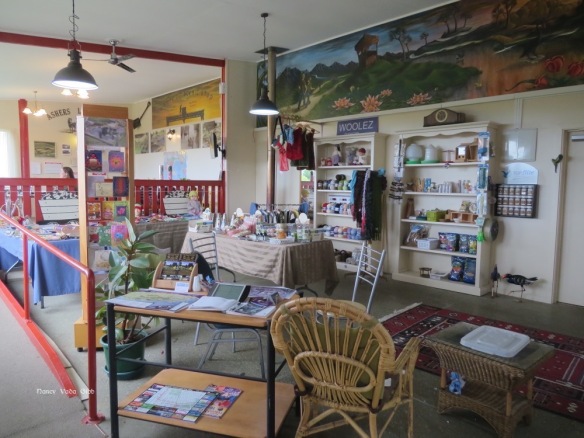 While Dave chatted with the owner I wandered around taking photos (what else) and admiring a very thick locally produced book which detailed all the local families and activities over the past hundred years, obviously a labour of love as well as a work of art. It made me wish one of my ancestors had come from that area! 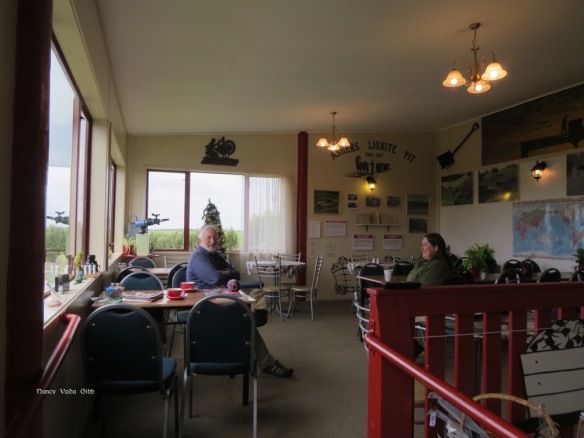 And so off again heading north and bypassing Invercargill, hopefully but as it turned out in vain leaving the threat of bad weather behind us. We got as far as Ranfurly, mostly in the rain, then just a little further on reached the famed Hayes’ Engineering Works & Homestead at Oturehua where we had camped last year. I did not see over the Heritage-listed Homestead and Works at that time so this time determined to do so. My camera chose that time to run out of battery power and I realised too late I’d forgotten to recharge my spare battery. So most of the photos below were taken by Dave, some at my direction. The cafe people very kindly allowed me to recharge both batteries in the cafe; we did not need any excuse to return repeatedly to the place, the food there is really delicious. 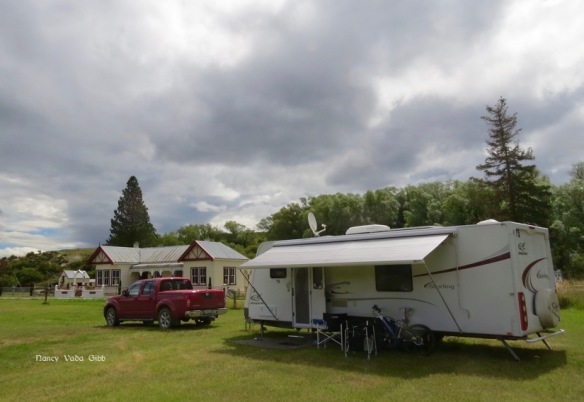 There was only one camper van staying overnight like us and it was home to a lovely Foxy-Jack Russell cross girl called Chewy. I could not get over how Chewy was a sort of hybrid of Penny and  those of Mac the Jack Russell who we looked after in Tauranga last year; she displayed marked traits of both. It was uncanny.

There is a lovely atmosphere at Hayes’. There are very few restrictions and one can wander around the old factory and office at will. Ernest Hayes was skilled at the lathe, anvil and carpenter’s bench, and all are still there … he made tools for fencing, shearers and for pest control, and made more than 400 windmills. The workbenches were littered with wooden patterns (moulds) from which steel parts were cast (mostly in Dunedin) then returned to Hayes’ for assembly. The factory ran from 1902 to well after 1950. 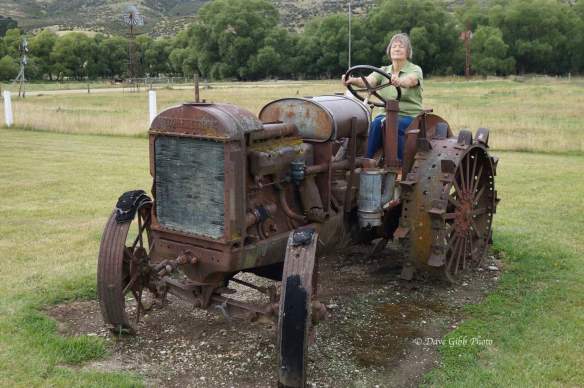 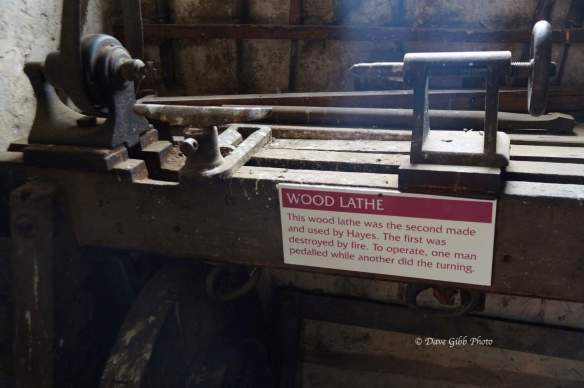 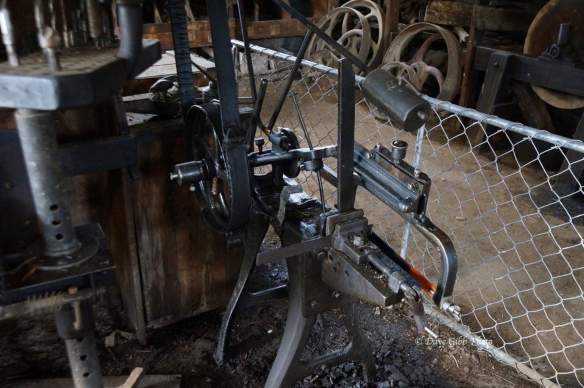 There were several local volunteers trying to get the clutch on an old electric motor which drove the main shaft to the whole factory to work again. The charming waitress at the cafe lived on a farm nearby. The cafe itself is a recreation of the original sun dried brick cottage in which the Hayes family lived for many years. Mrs Hannah Hayes “… was arguably NZ’s first ravelling saleswoman, in full skirt and on a bicycle, rode into the far-off Mackenzie Country with a catalogue and order book in hand while her 12 year old daughter looked after her eight younger siblings.” Eight! 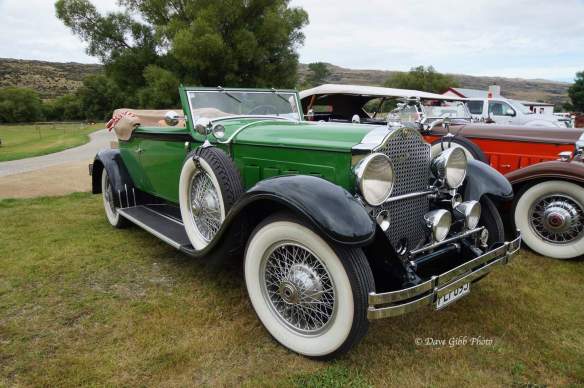 The Homestead was full of quirky things reflecting on the owner-builder being an innovative engineer. It was built from sun-dried bricks stored under tussock during WW1. An electricity system brought power generated by the peloton wheel which also supplied nearby homes – this was years before the national grid was switched on. When the Hayes switched off the power for the night it was lights out for all the other homes too.

On the morning of our departure I could not resist a last visit the Hayes’ cafe and bought two cake slices to enjoy later. Also a tiny pot of Arnica ointment  – I tried the Tester yesterday and was pleased with the result.

We stayed at Hayes’ for several nights, making a day trip to St. Bathan’s to see the Blue Lake which was definitely not blue on that grey day.

Approaching the Lake from above, we were horrified to see two grown men helping two very young boys to scramble up the last few metres to safety. The cliff is extremely crumbly, signs warn of the danger, so it was the height of irresponsibility of those men (father and son) …..  Dave said something suitable to them and one responded “It was steeper than we thought” (!). 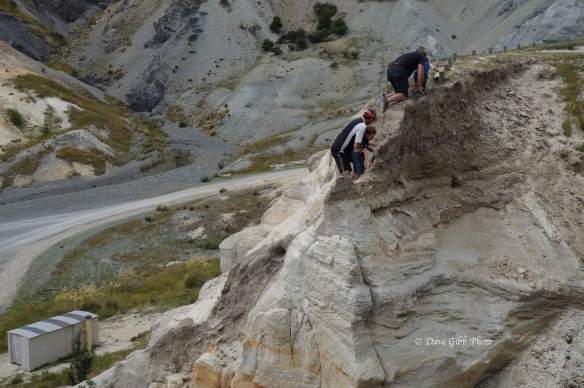 Leaving Hayes’, our route was decided by a coin toss. Left would lead us back to Ranfurly, Mosgiel and up the coast; right to Alexandra, Cromwell and thence to Tekapo. Right won.

We stopped for a coffee at a cafe and I spotted this sign:

I have always loved the drive from Alexandra to Cromwell  along the river, particularly when the autumn colours are at their finest. But it was only high summer (??), so all the poplar trees were green and the craggy slopes which line the Clutha river a dull brown-grey. It’s still a lovely drive.

We didn’t stop in Cromwell but continued to the Lindis Pass, again looking different to usual, actually more green thanks to the rain. The northern approach to the highest point of the Pass had far more lupins than I remembered, but pale counterparts of those near Tekapo – or was it just the overcast sky? Later as we passed Tekapo it was difficult to see any lupins at all, they had just about finished. 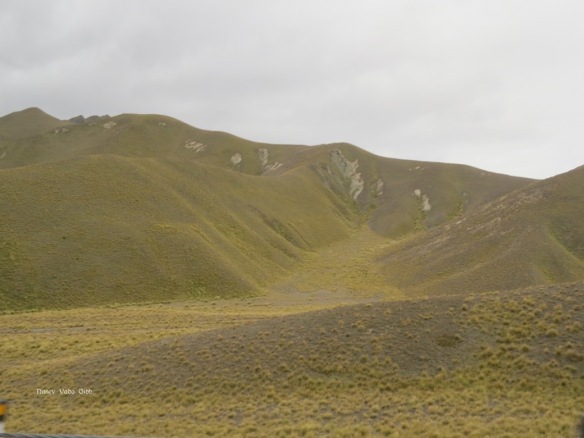 One notable feature of that day – no more classic cars on the road! Ever since we left Christchurch we saw literally hundreds of old cars ranging from polished Classic to very old Vintage chugging along; they’d been in a huge rally all around Otago. It was wonderful to see so many cherished old vehicles and we didn’t mind (much) being stuck behind some of them for miles. My right arm became quite sore from being frequently elbowed by Dave as he drove along: “There’s another one!” There were several at Hayes’ for close-up admiring. 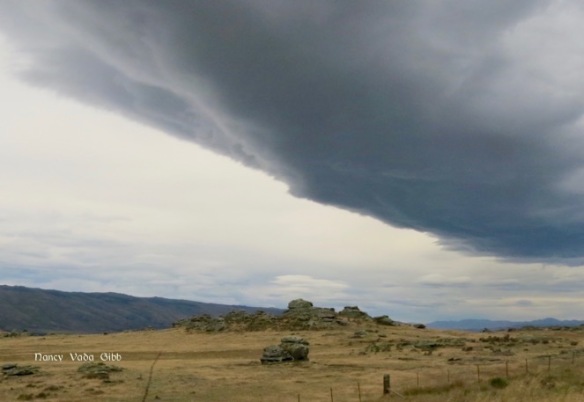 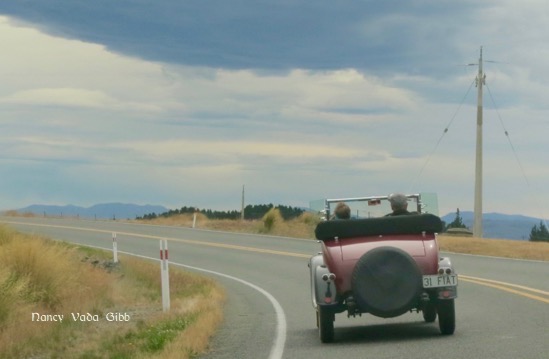 Lake Pukeko was at its turquoise bluest, but with a strong wind at the headquarters, Mt. Cook remained invisible. I never tire of the views of this fabulous lake. One essential – you must have polaroids to appreciate it fully.

There’s a new feature outside the Pukeko Information Centre: 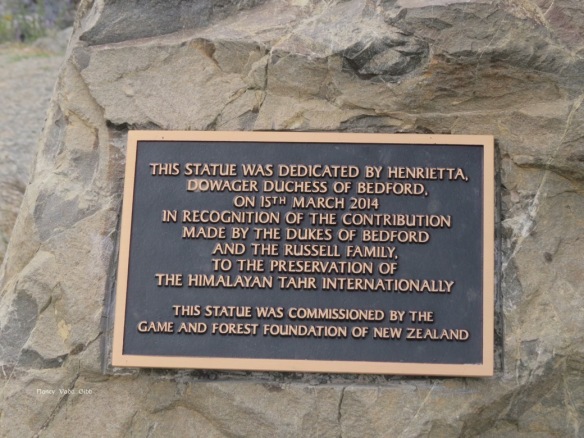 We decided to keep going as far as Peski’s at Geraldine. I wrote about this place a few (?) blogs back. It is a lovely restful place offering power, showers, chooks for all our veggie scraps, and a washing machine; also home-made jams and pickles and if we were lucky other treats straight from the garden. The perfect place to hole up while the rain pelted down. It even has a dump point for our grey and black water tanks.