It’s been a while since I wrote anything. Christmas has been and gone, a highlight the annual Secret Santa with all Dave’s family, and all the usual over-indulging which accompanies the season.

We moved from the Maniototo homesit to one at Swannanoa, about 25 km NNW of Christchurch, just before Christmas. What a contrast. There we were surrounded not by mountains but by towering runs of poplars – they could hardly be called hedges. We were in a comfortable farmhouse surrounded by a lovely extensive garden and our new charges were one placid old sheepdog, three heifers, two chooks and seven goldfish. 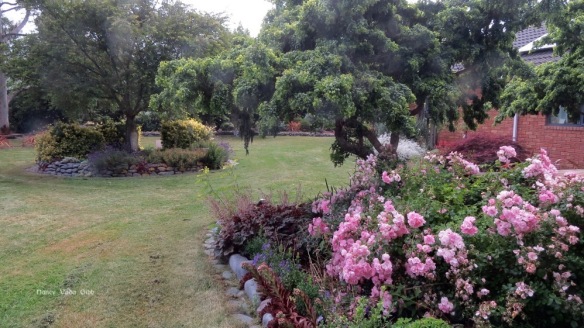 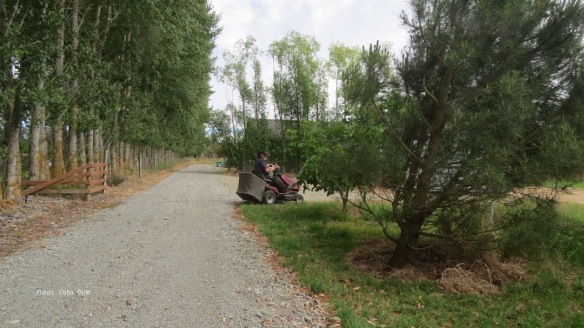 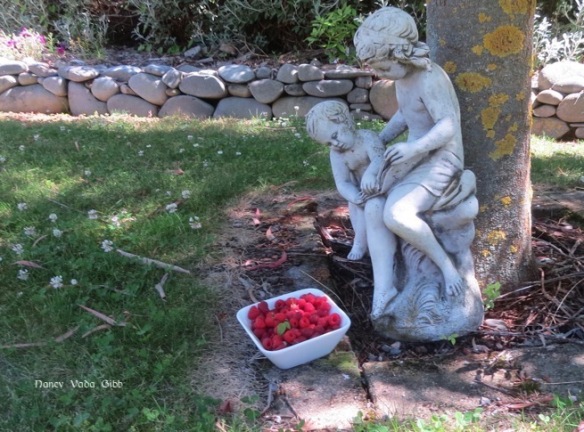 Going for a drive around the district meant kilometres along the straight Tram Road or similar roads with their multi-height hedges and rather luxurious houses. Cust, Rangiora, Oxford … they were our new destinations when not popping down to Christchurch.

Dave took the opportunity to give the caravan carpet a good clean with the water blaster. What a difference it made. Penny enjoyed helping him mow the grass. I enjoyed the freedom of a large kitchen and the time (and space!) to complete two large jigsaws. 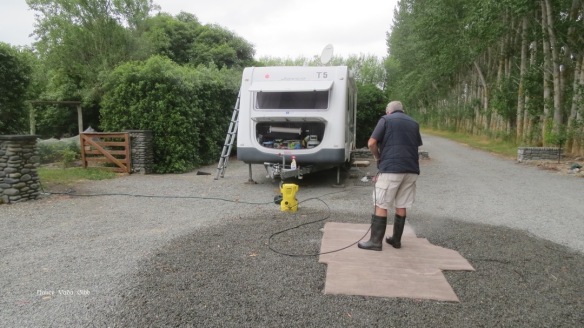 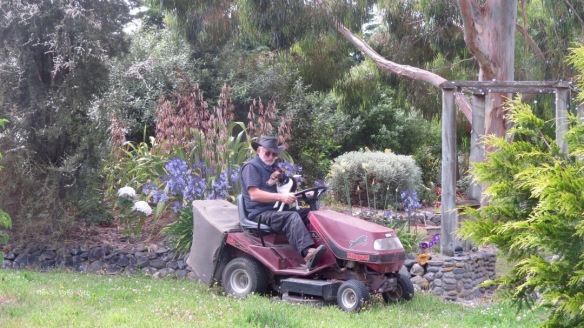 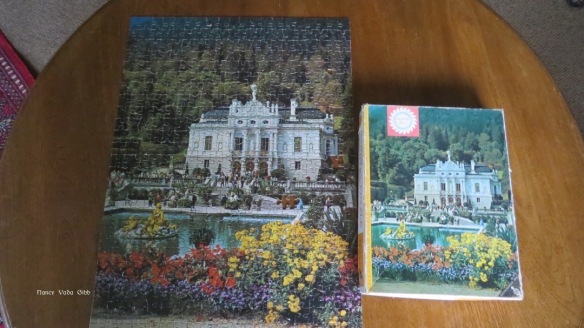 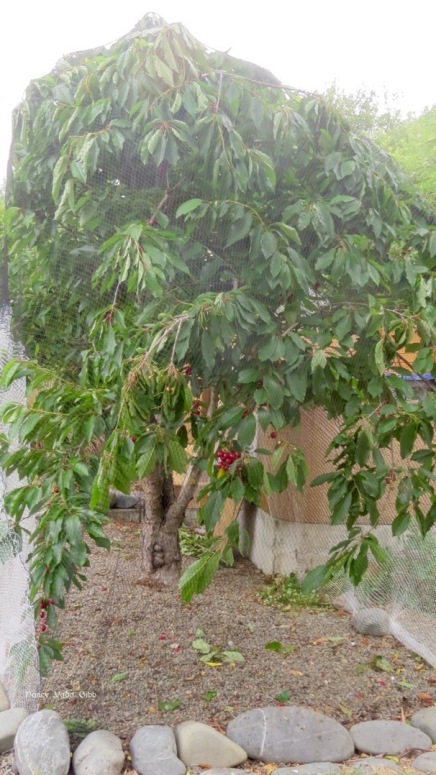 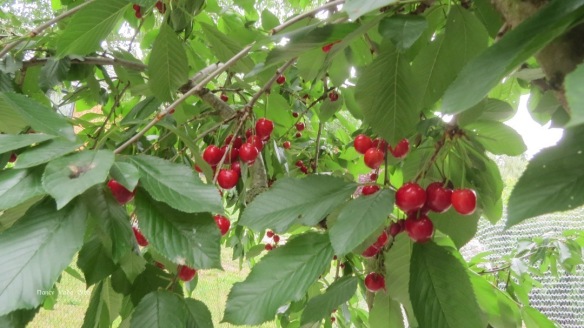 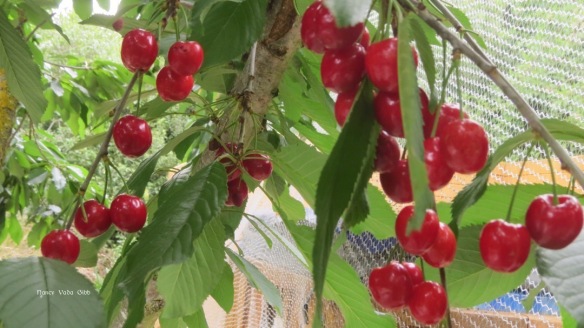 We picked some judiciously, waiting until the fruit was fully  ripe. Just before New Years’ I picked a big bowlful, but by New Years’ Day we needed more. Full of anticipation I went out with a huge bowl, to be met by a large GREEN tree, not a hint of red to be seen. It had been utterly stripped! Holes in the netting indicated it was the work of a rat or rats rather than humans. It was amazing – not a single cherry to be seen, even unripe ones, and no fresh pips or bits of half-eaten fruit on the ground either. Nearby is a spa with a wooden surround and when Dave checked inside there were hundreds of dried pips. So that was the end of our cherry season. 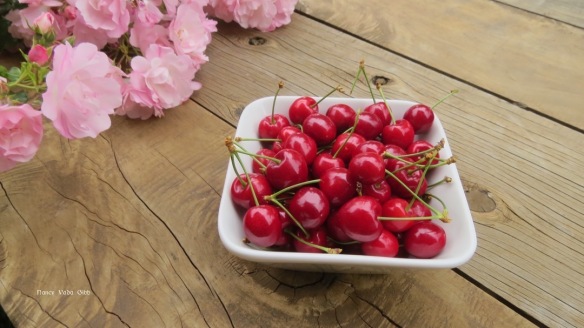 But there were still raspberries, strawberries, even some boysenberries. (memo to self, if we ever grow raspberries, make sure the canes are in an elevated position). Plus zucchini, lettuce and some kale and other vegies.

All too soon it was time to leave, the family came back from their annual camp all suntanned and smiling and relaxed. Lovely people. That was the second year we’d homesat for them at Christmas.

We returned to our usual haunt the chestnut orchard, where the flowering season was well under way. These are the catkins, the ground was littered with spent ones which were constantly fluttering down in any breeze. 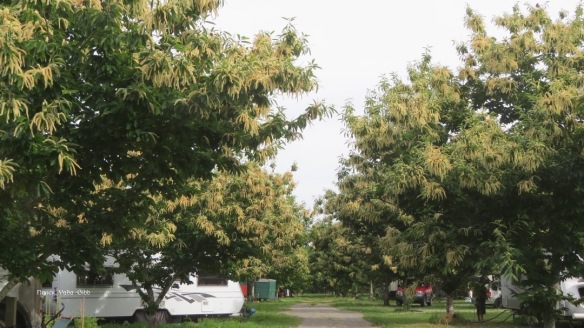 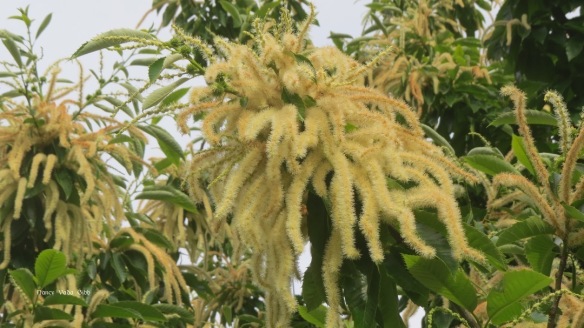 Mrs. Google tells me that the same tree can bear both male and female catkins.  Some catkins have both pollen-bearing flowers and small clusters of female or fruit-producing flowers. Two or three flowers together form a four-lobed prickly case (calybium) which ultimately grows completely together to form the brown hull. Another interesting fact is that the seeds do not become dormant as with most other plants but start to germinate upon falling to the ground in autumn. The seeds lack a coating or internal food supply so they lose viability soon after ripening and must be planted immediately.  Another fact is that chestnuts have very little protein or fat and no gluten but plenty of carbohydrate which compares with that of wheat and rice. They are the only nuts that contain Vitamin C (which decreases by about 40% on heating).

We went for a walk along the Waimakairi River a short drive north of the orchard….. 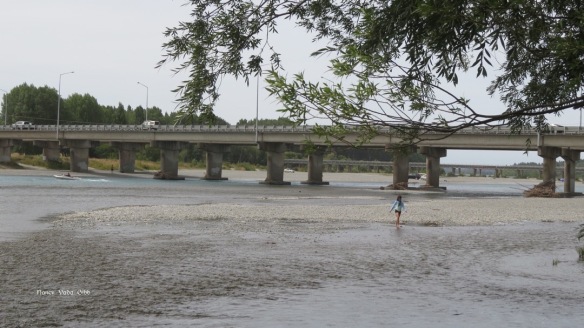 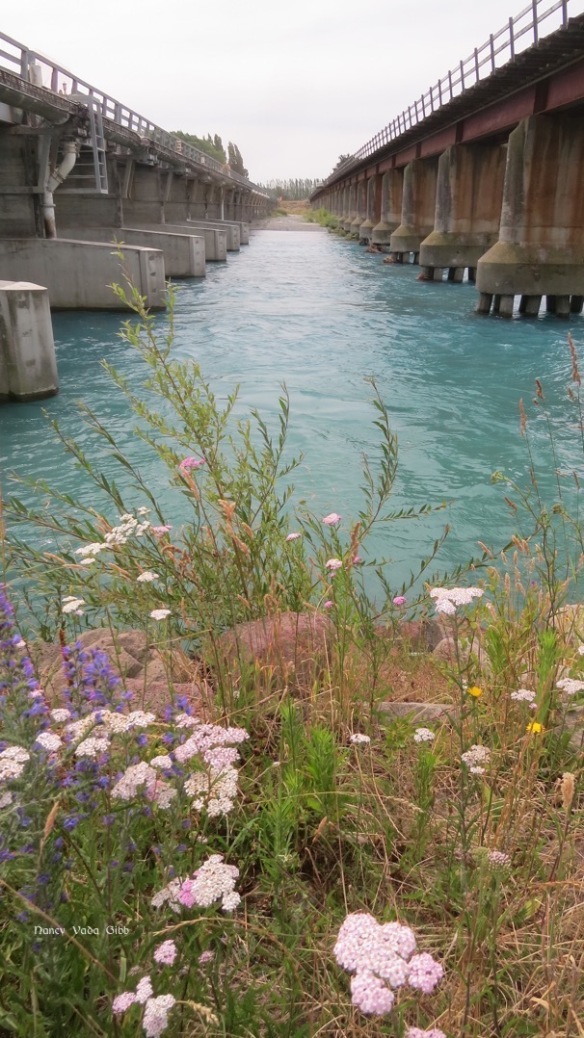 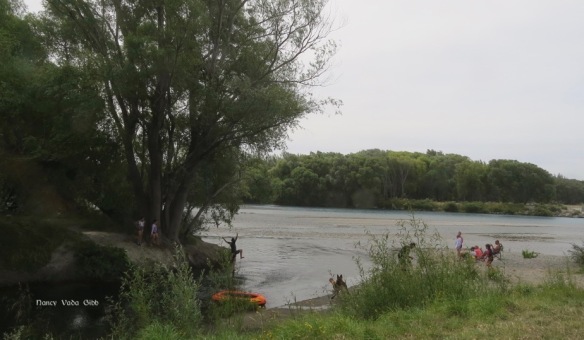 … then did a little off-roading while following the river towards the mouth. As we were leaving Dave thought he could hear something odd. He checked all the tyres – nothing. But a little further on, he stopped again and this time we discovered that one of the front tyres had been sliced and wrecked  by a piece of metal, probably part of a bearing. A perfectly good  tyre ruined. 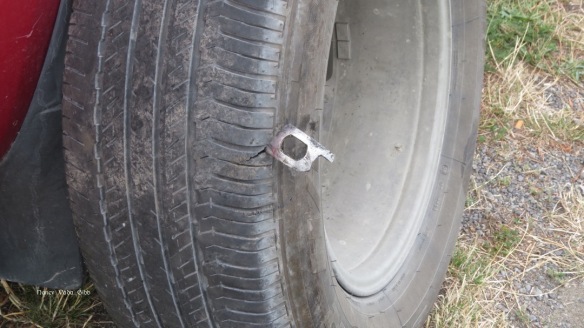 Another day we drove to Sumner Beach and then Taylor’s Mistake, which we have not visited for some time. There is nowhere to stop to take proper photos on the very narrow twisty road down to the Mistake. The Port Hills were looking very dry. 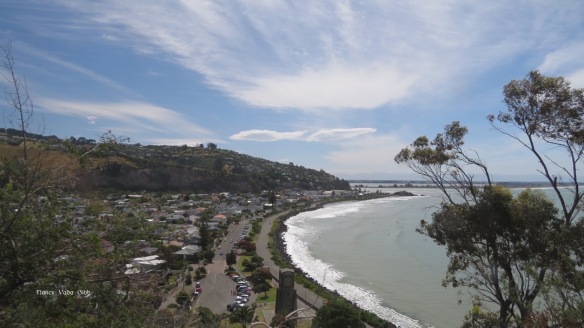 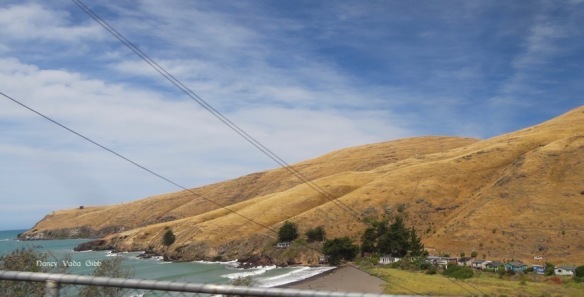 Then it was time to shift to the next homesit near Leeston. So different again. Our charges are one lovable young dog, a friendly horse with a penchant for carrots, an even friendlier sheep, and a number of peacocks, peahens and chooks. There is an extensive vegetable garden and a totally enclosed berry patch – strawberries, raspberries, blackcurrants – the latter two well-staked and trained so it is a joy to pick them without stooping over. (Another memo to self – grow them in a netted enclosure with a high ‘roof’.) The chooks produced ten eggs the morning after we arrrived – I don’t know what we are going to do with so many.

Homesitting is an absolute privilege. After a couple of email exchanges and sometimes but not always a preliminary visit, perfect strangers are willing to allow us to live in their private home, to a great extent literally living their (non-working) lives. All we have to do is care for their pets as if they were our own and, usually, do a little gardening, watering and/or lawnmowing. We have time to explore the surrounding district in a way not possible with a casual day visit. We always try to leave a property in a better state than we found it. At the Otago homesit, Dave reduced much of the waist-high jungle around the house to a far more manageable level. Here he has just taken off to tackle some Scotch thistles (!).