We wanted to visit my brother in a nursing home at Wauchope near Port Macquarie before finally heading for Queensland. The shortest route seemed to be Cobar – Nyngan – Warren – Gilgandra – Coonabarabran – Gunnedah – Tamworth – Walcha then down down down the Great Dividing Range to Wauchope. Not all in one day of course. Somewhere along the way I must have mislaid my treasured RM Williams’ navy quilted and studded sleeveless jacket – and am missing it sorely.  We’ve contacted as many places as we can remember to ask if it was left behind, but no luck so far. I really cannot understand how I could mislay it.

We stopped at Warren, which sits on the Macquarie River. Warren is a major cotton-growing area and the river water is used for intensive irrigation.  Following recent rains it was much discoloured. 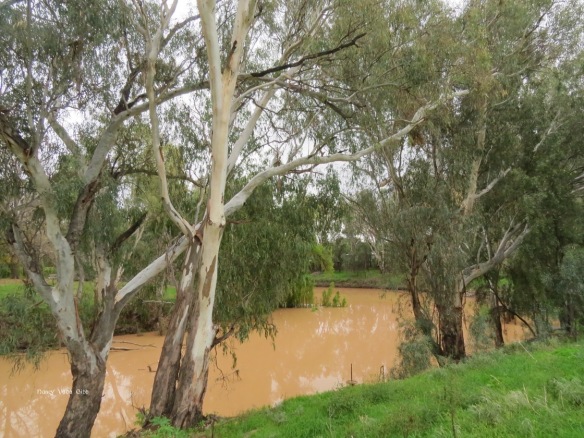 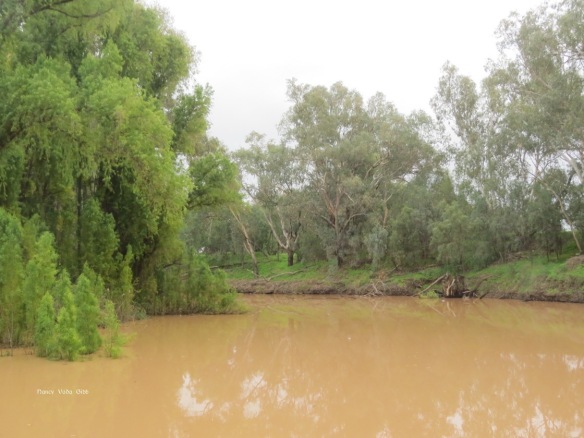 The main highway goes over this bridge. 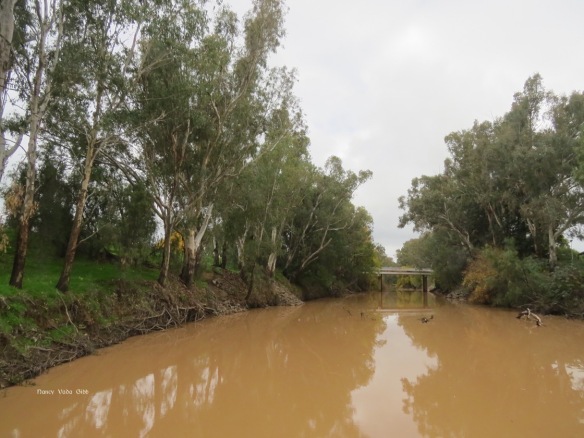 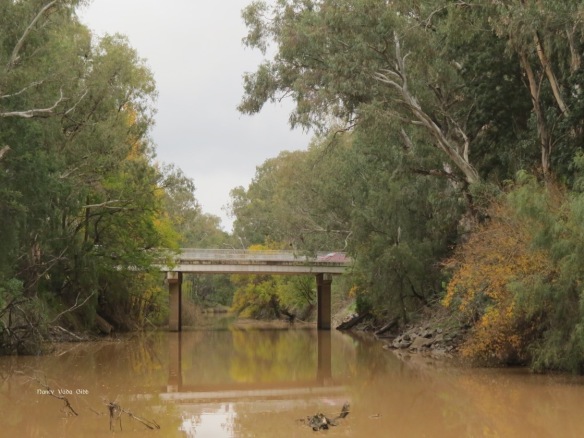 The view from the other side. Wattle trees lined the banks. 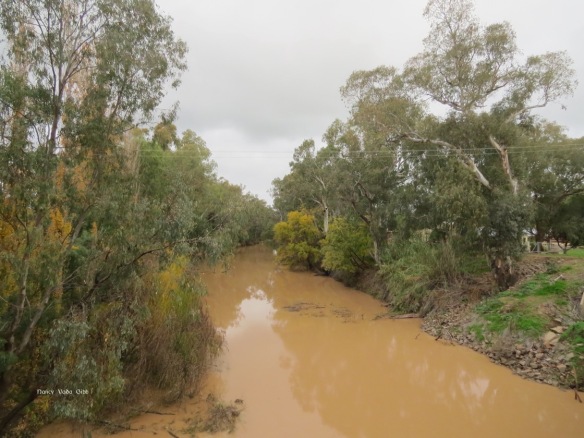 A nearby sign tells how the townsfolk battled to save their township  from a major flood in 1990. 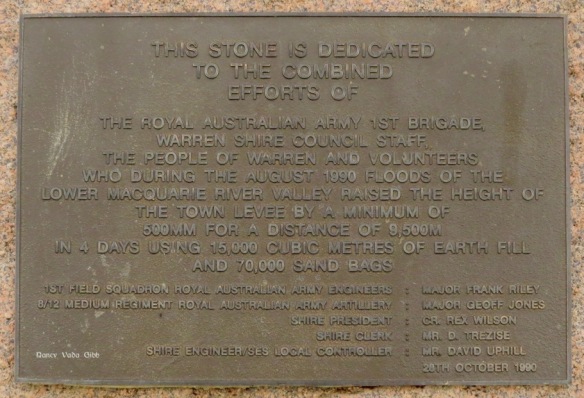 Warren is also notable for being the point where the explorers Oxley and Sturt passed this way during their early explorations in 1818 and 1828 respectively, the latter on the search for the ‘inland sea’. 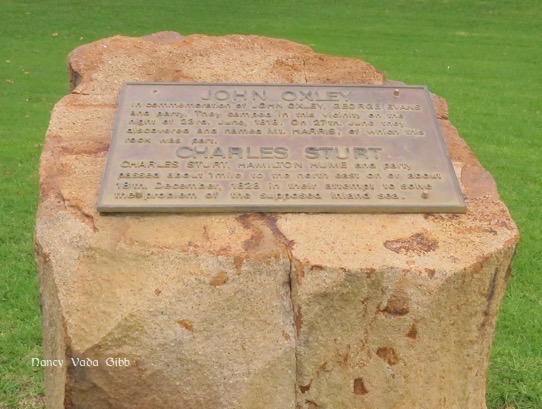 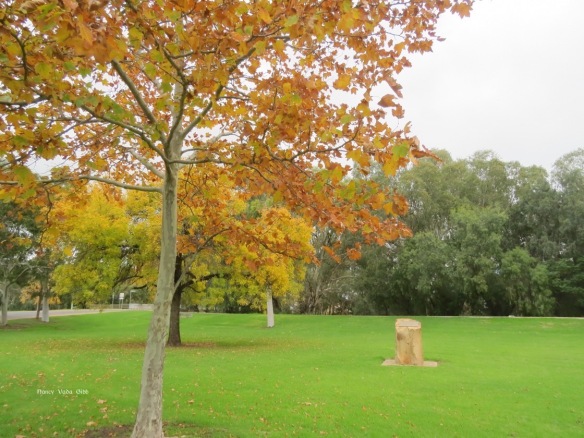 This map shows the location of Warren in relation to Broken Hill and also Tamworth, and the size of the Macquarie and Darling Rivers. 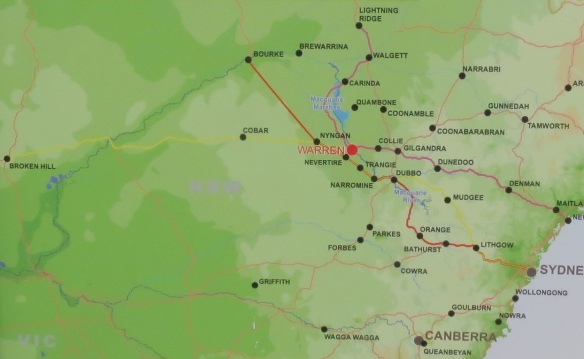 After Warren came Gilgandra, the location of a memorable time when I was six years old. I was recovering from a serious bout of meningitis (which resulted in my deafness) when my mother, my little brother and me flew up for a ‘holiday’ on a wheat farm in the locality. We flew up courtesy of Butler Air Transport in one of the early DC3s. I have a photo of Barry and myself on the tarmac, but it is in storage in Christchurch. It was also the first time I’d been on a horse. My mother’s friends’ two daughters rode an old horse to the local bush school each day (oh how envious I was!) so when offered the opportunity this little city girl was plonked on top and the horse given a slap which made it take a few steps forward. And there it stopped. Nobody had told me about using my heels so I just sat up there on the giant, flapping the reins uselessly and shouting Giddap!  Every now and then someone would come out and give the horse another slap.

We were ready to call it a day by the time we were approaching Coonabarabran, and looking at the map I suddenly realised we were about to skirt the fabled Warrumbungles. A quick decision was made to spend a night or two there in the National Park. Turning off the main highway, the distant mountain landscape changed dramatically: 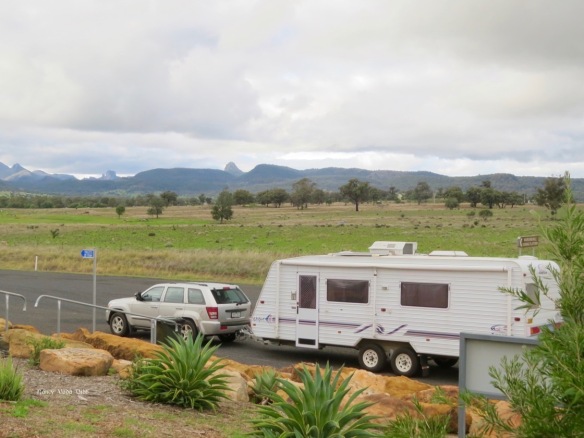 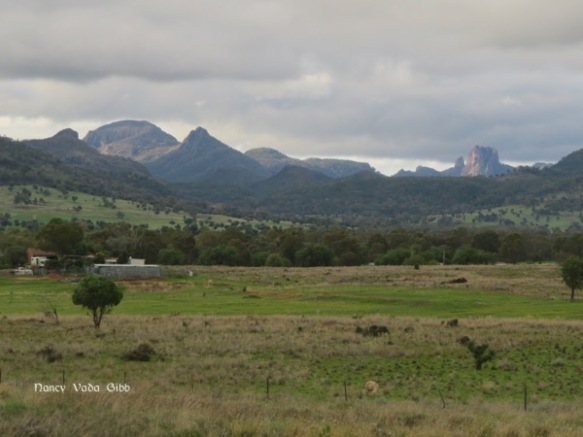 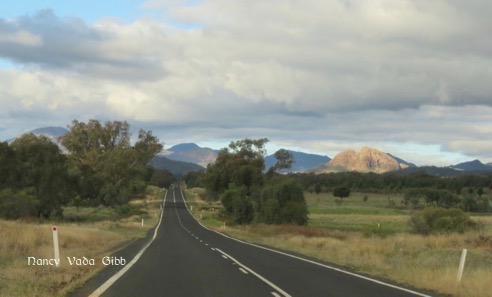 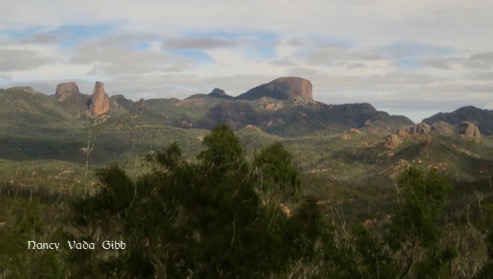 The park is an area of former volcanic activity; “…… a large shield volcano which was active from 13-17 million years ago. the lava overlays sandstone areas which are the remnants of the 150 million year old Pilliga Sea. Weathering of these rocks left the harder tracheae plugs towering over the wooded slopes ….”

WikiCamps indicated several camps but only Camp Wambelong looked close to the road, and as we were towing a 24 ft caravan we picked that one. It turned out to be a grassy area off the main road to the information centre which was about 5 km further on where there were many more camp sites, some even with power. But I’m glad we stayed where we did, surrounded by kangaroos at dusk, with walking trails in easy distance and a creek nearby. 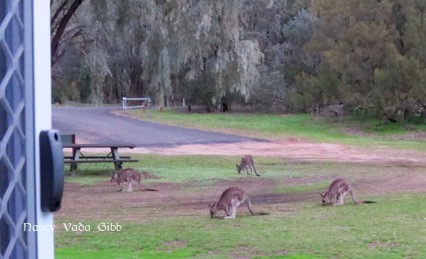 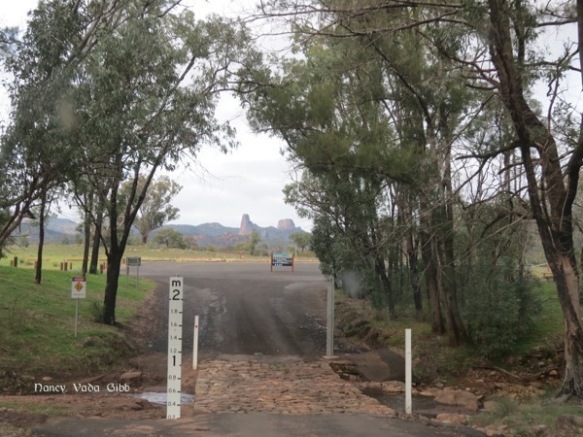 We’d been noticing the effects of a bushfire everywhere but it was not until we visited the Information centre that we realised how major it had been. However, encouraging signs of regeneration were everywhere. 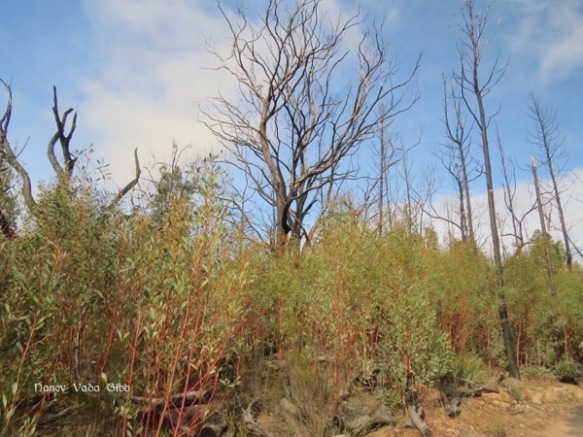 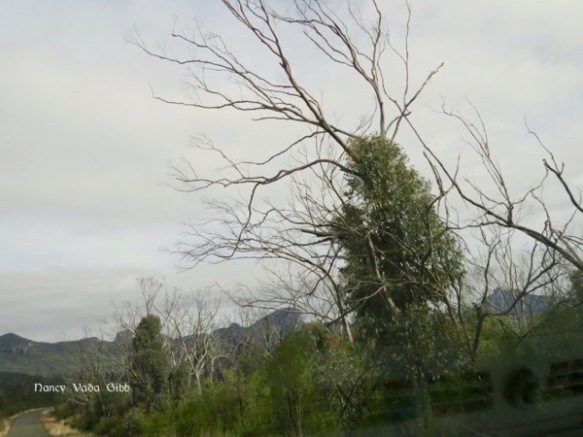 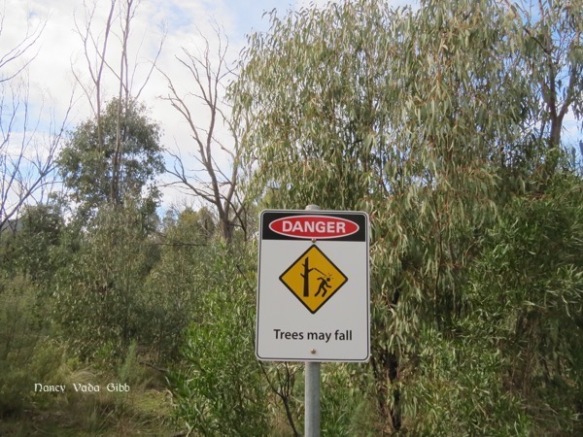 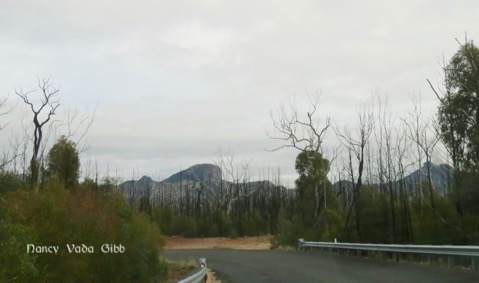 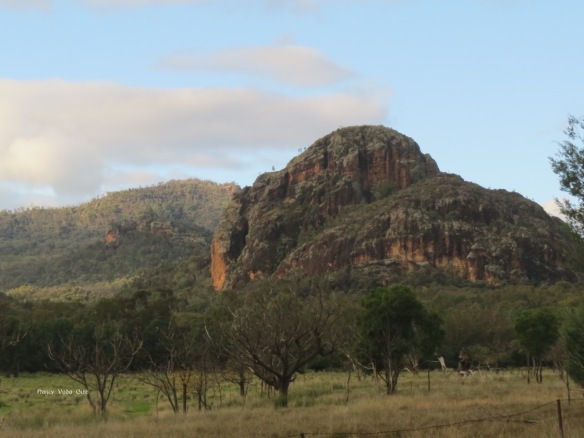 Described as a “once in 100,000 year event”, a firestorm, it occurred in January 2013 during a time of very high temperatures (up to 47 deg C) and fierce winds. Although the fire destroyed much of the National Park, Siding Spring Observatory and surrounding land (55,000 hectares in all), 51 homesteads, stock and farmland and also caused major damage to the park’s walking track infrastructure, no lives were lost. Only a few days later the region was hit by absolutely torrential rains which caused even more damage, washing away topsoil which contained many seeds necessary for regeneration. Signs of this were still visible. 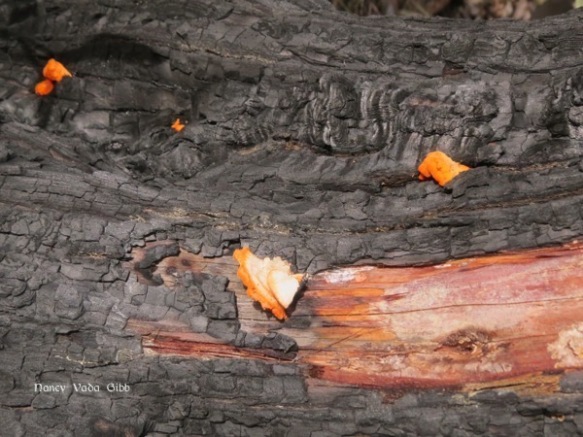 A major research program is being undertaken on the impact of all this on the region’s flora, fauna, cultural heritage and physical landscape. Nest boxes for birds, possums, gliders and bats have been put in place to replace hollow trees. 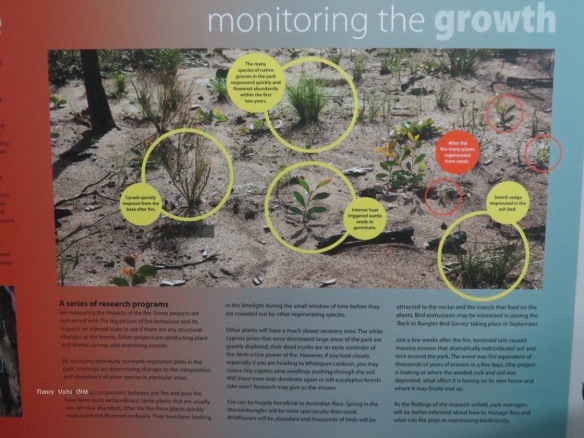 We left the caravan parked at the Camp and drove to Coonabarabran to do some shopping, stopping at various viewpoints ……. 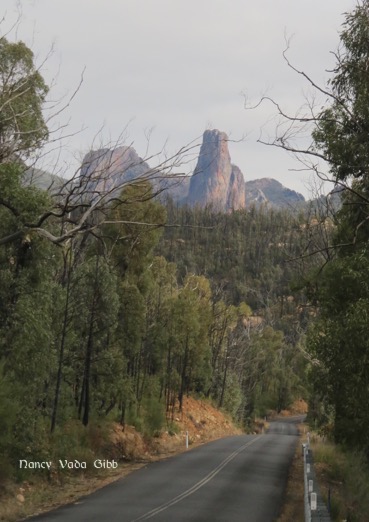 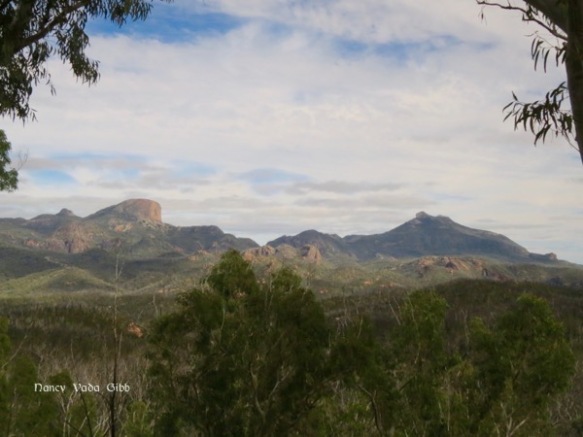 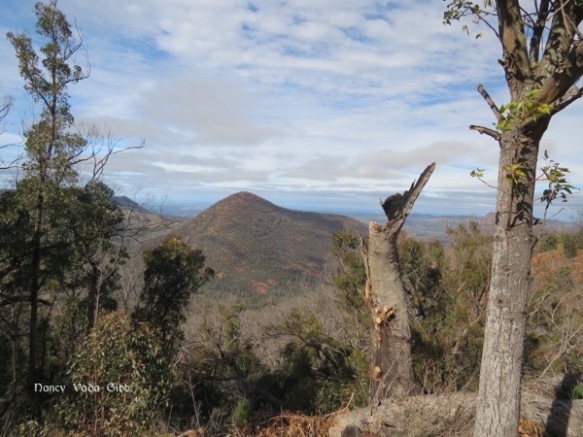 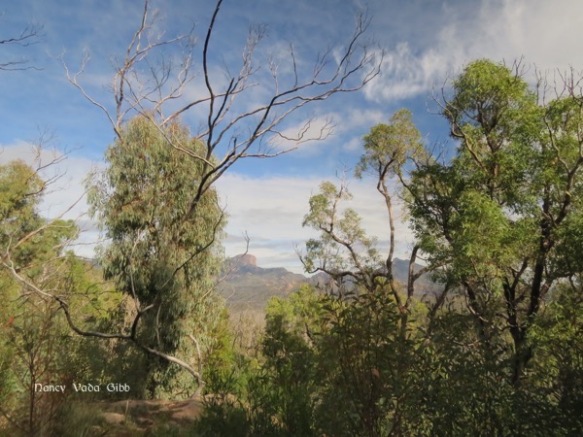 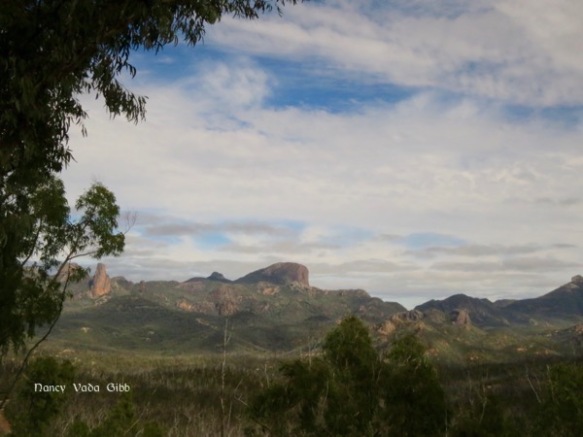 ……. and called in at the world-famous Siding Spring Observatory. The site houses 17 separate observatories including one with the largest optical astronomy research telescope in Australia. We decided not to visit the Exploratory Centre, which in retrospect and following too-late advice from friends, we should have done! But we did have some good coffee at the Visitor Centre. 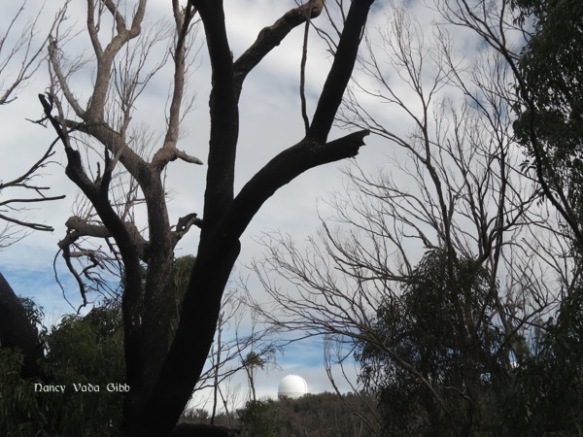 After two nights in the Warrumbungles it was time to move on (it was also a trifle cold with no heater) so off we were again heading for Tamworth, Walcha and then Wauchope.