This place needed a blog to itself. Heading east from Broken Hill, we thought it wise to top up the diesel tank at Wilcannia before venturing north into the unknown. Friends had warned us about the fine bull dust on this road but they travelled at a different time of year, and we were following the rain, so – no dust!  Just green grass verges all along the 93 km from Wilcannia.

White Cliffs was Australia’s first commercial opal field. It describes itself as “…. small, dusty, a bit ramshackle…” and so it is, but “… look deeper and you’ll find the beauty of opal, the gritty reality of mining, the chance to fossick for your own opal, and the fascination of underground living…”  All of which we found to be true. 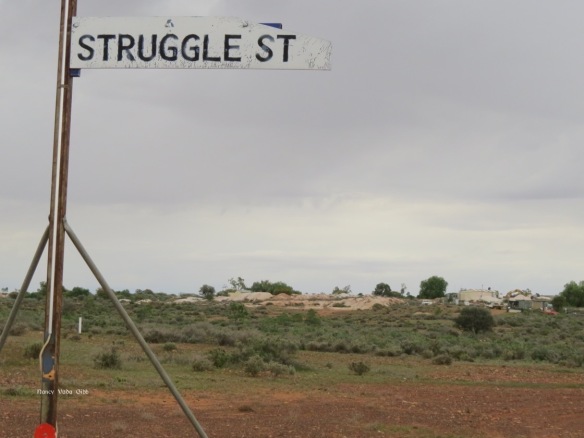 We were not sure where to go on arrival but someone drove up and advised us that the Pioneer Tourist Park was just nearby, with powered sites for $25 a night. She was also the Park’s caretaker and showed us several sites, the park being rather full. It was a very clean, well organised park surrounded by trees and shrubs, with a swimming pool nearby. Across the road was a school; we were told there were ten pupils. 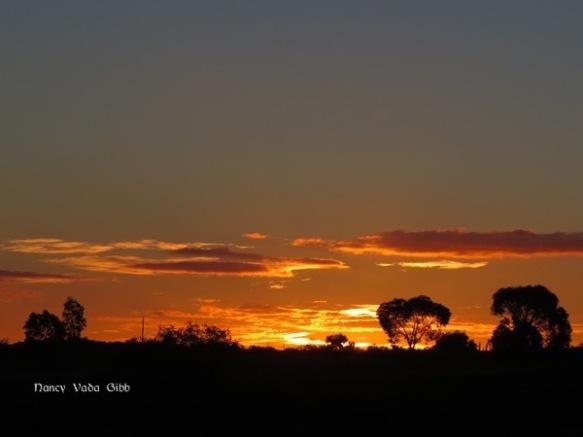 The Murray River Caravan Club (or similiar) whose members almost filled the camp,  invited us to join them on a guided tour the following morning. This turned out to be a very fortuitous invitation, the guide was excellent and of course we saw places and things we would not have seen or understood otherwise.

First we were taken to the Pioneer Children’s Cemetery with its sad little graves. It was said to have been White Cliffs’ first landmark.

A bunny rabbit to hug? 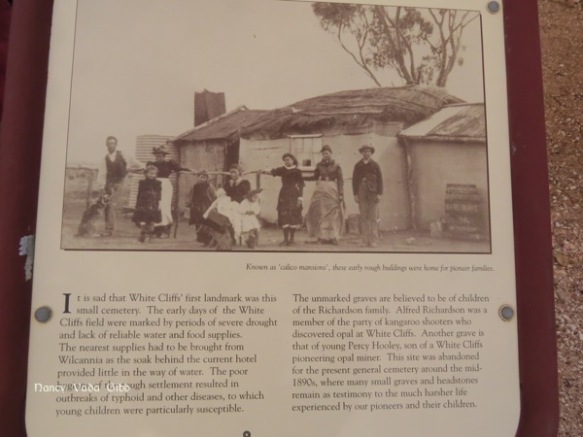 The shaft of an abandoned mine. All around us were mullock heaps. 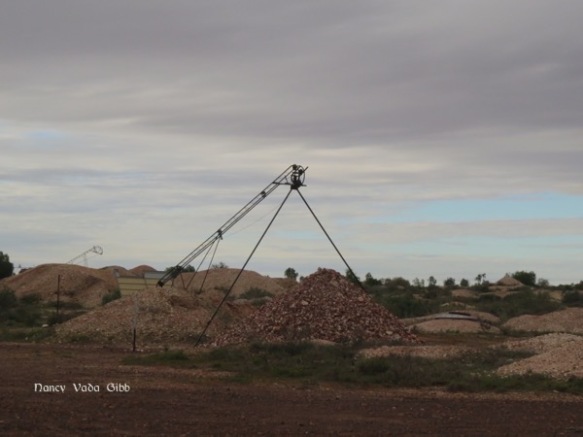 A registered claim is usually 50 x 50 metres with a post at each corner; that on the NE corner had a datum board (small metal tag) with the details of the claim holder. Claims had to be re-registered every year. 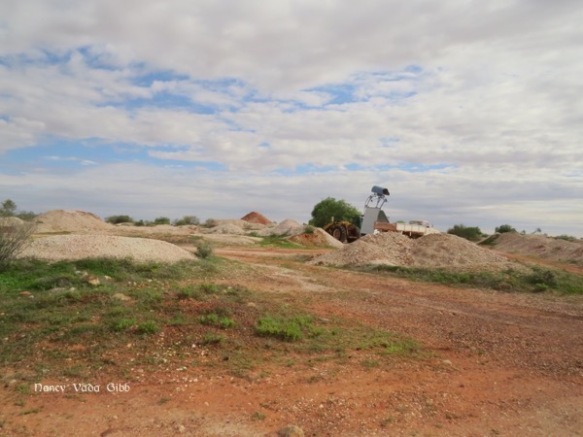 We were shown examples of opal found in the field including an opal pineapple (a pseudomorph of Glauberite or Ikaite crystal clusters which are replaced with opal). These are only ever found at White Cliffs and the guide discovered one in his own backyard when spreading some mullock from another site to form the floor of a shed! 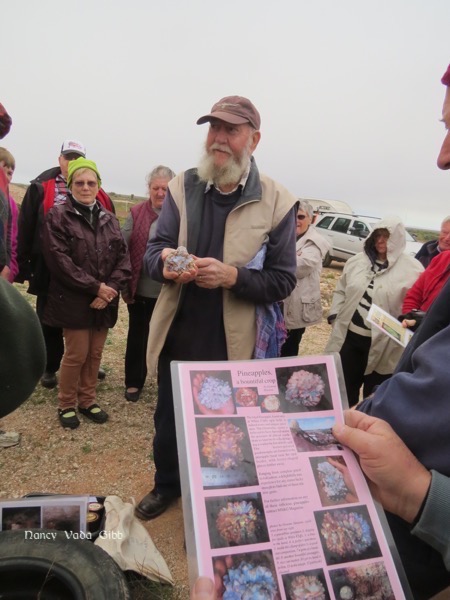 There are only two above-ground houses within the opal field, further homes being forbidden unless they are floor-less and easily transportable.Many homes were built partly underground. Some were mere shacks, others quite substantial. 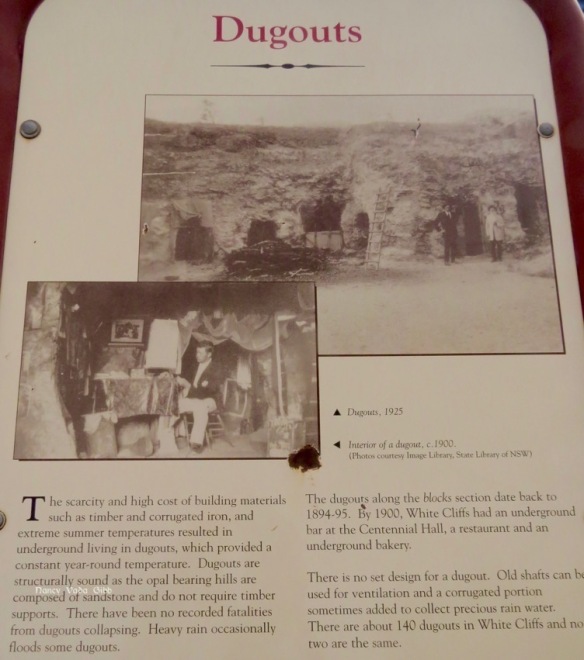 This house was constructed from empty stubbies (beer bottles) with a huge heap beside the house ready for any extensions!

Lots of caravans too, of one form or another.

We were not really interested in buying any opal, but I was amused to see at one ‘serious’ shop the prices were very high, reflecting on the high quality of the stones, but at another more touristy place the prices were low – and although it was not said, the opals were probably only doublets or triplets.

An unexpected highlight of the tour was a visit to the White Cliffs Solar Power Station. Originally established as an experimental facility by ANU researchers in 1981, “… the Power Station is now nationally recognised as an iconic engineering project equal in status to the Snowy Mountains Scheme, the Sydney Harbour Bridge and the Parkes Radio Telescope.” In 2006 it was given the honour of receiving a Historic Engineering Marker. 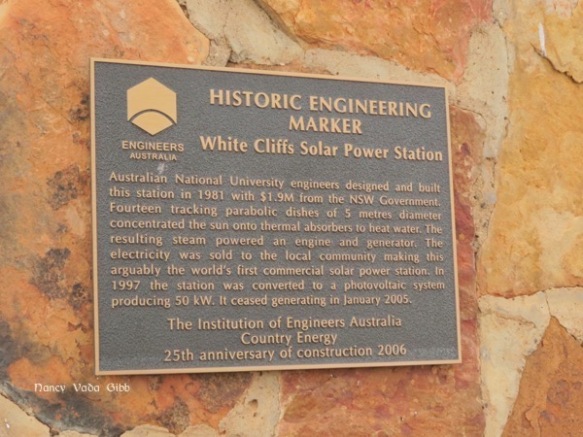 There are 14 sun-tracking parabolic dishes of 5 metre diameter. The electricity from the station was ‘sold’ to customers within the township (the local hospital, school, PO and 12 residences), making White cliffs arguably the first commercial solar power station in the world.  In 1997 the faculty was converted to a photovoltaic system, the dishes were resurfaced with new mirror panels …..  the system was 22% more efficient.  It was the first solar dish concentrator photovoltaic plant in the world and  played a part in the development of solar technology. 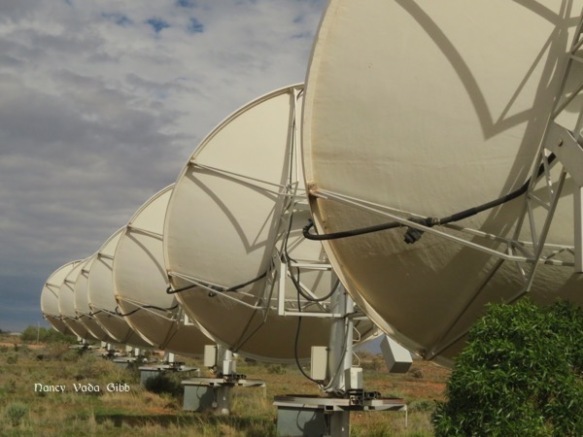 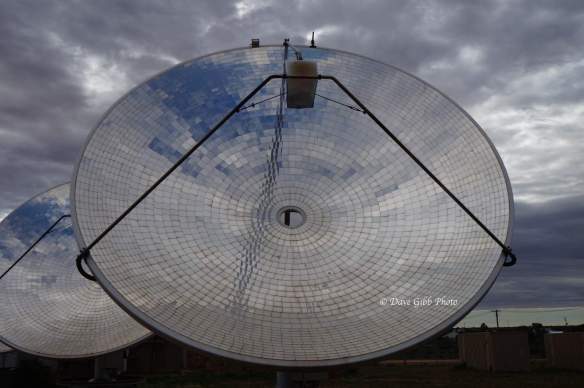 We were told that one man looked after the whole system, and his duties included cleaning all the mirrors, using a trestle fitted to the top of a truck.

The present generation of this technology is now commercially operating in central Australia at ten times the scale of White Cliffs.

Here are more photos taken next morning before we left. 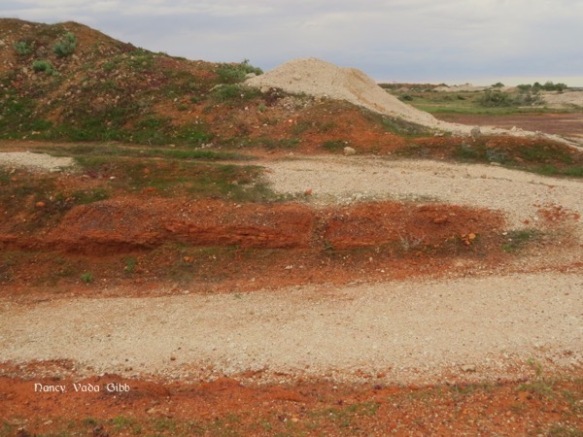 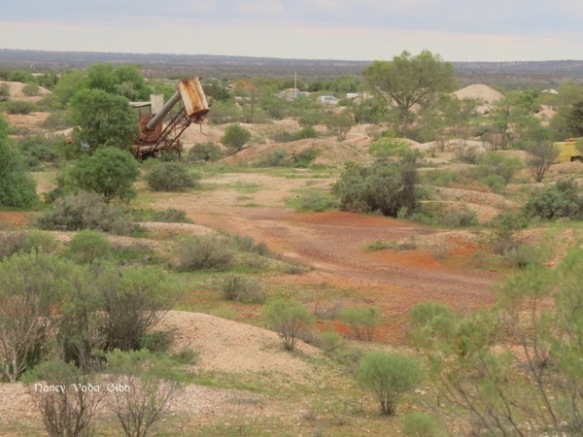 There are three of these special shacks labelled Nobody’s, Somebody’s and Everybody’s.

Yes, it was surprisingly green. Tiny little plants and native bushes were popping up everywhere following recent rain. I wonder how many will survive next summer.