We’ve now been in Canberra for several days. Initially we concentrated on bringing Westie the caravan and Grandy the Jeep up to scratch – Westie has a persistent leak and Grandy a persistent rattle (!). Dave thinks the leak comes from the TV aerial inlet or possibly the solar panel power line inlet on top of the caravan, or just possibly somewhere else which could have been damaged by a tree branch when we were trying to extricate ourselves from the driveway in Melbourne. He has removed all the old caulking and applied new, then hosed down the caravan and we await developments, assisted by an early morning rainfall.

Grandy has proved more troublesome. Initially the noise was thought to be a stone caught in the brakes, but after removal in Cooma the noise started again … so in Canberra we went to an authorised Jeep dealer and they had a good look and said the wheel bearings were getting worn and would need replacing fairly soon, but they couldn’t do it for two weeks. We may move on and get it done elsewhere further north.

Nearby Yass has long been on my list of places to visit, as it features in my Darchy family history several times. Legend has it that my ancestor Thomas Darchy worked for or at least visited Hamilton Hume on one of his Yass properties; it would have been in about 1841-43,  long after Hume had retired from active exploration. Ann “Nanno” Byrne, the mother of Thomas’ future bride Susan, ran an Inn nearby at Five Mile Creek, so it is likely Thomas met Susan in the Yass district. They were married in Campbelltown just outside Sydney in 1844, then made their first home at Black Mountain near Yass. It is not clear to me yet if Five Mile Creek is part of the Black Mountain area, but records show that their first child was born at Five Mile Creek in 1845. Later they moved further west to more open country in the Lower Murrumbidgee.

Ann Byrne was the fourth of 16 children and was born at sea on the “Tellicherry’” as it approached Australia in 1806.

According to the Monaro Pioneers Index and some other records “Nanno” Byrne was the owner of 1900 acres and leased the Coach and Horse Inn on Old South Road at Five Mile Creek in 1855. She may have been the licensee even earlier. She married her third husband Joseph McKeogh in 1853 in Yass but I think continued to use the Byrne surname.  She died in 1864 at Five Mile Creek, of “Atrophy and debility, the effect of accidentally breaking her legs”  two months previously and was buried in Yass under the surname McKeogh. Her name is not on the list of headstones in any Yass cemetery.

Where was Five Mile Creek? It is described variously as:

3. Between Yass and Jugiong, near Bookham.

Maps show most of these place names, but not Five Mile Creek. So one fine morning we set off on a voyage of discovery (!).

First – Yass. Just before the town I spotted Hamilton Hume’s cottage, now owned by the National Trust. Did Thomas Darchy visit Hume there? Probably! But even without that inducement it was an interesting old building. 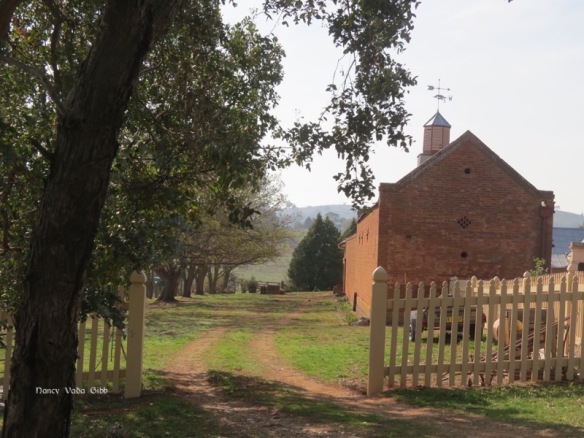 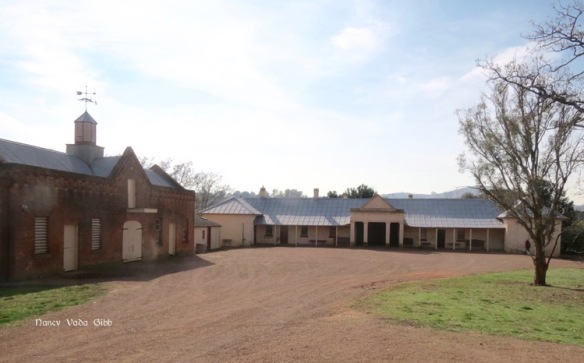 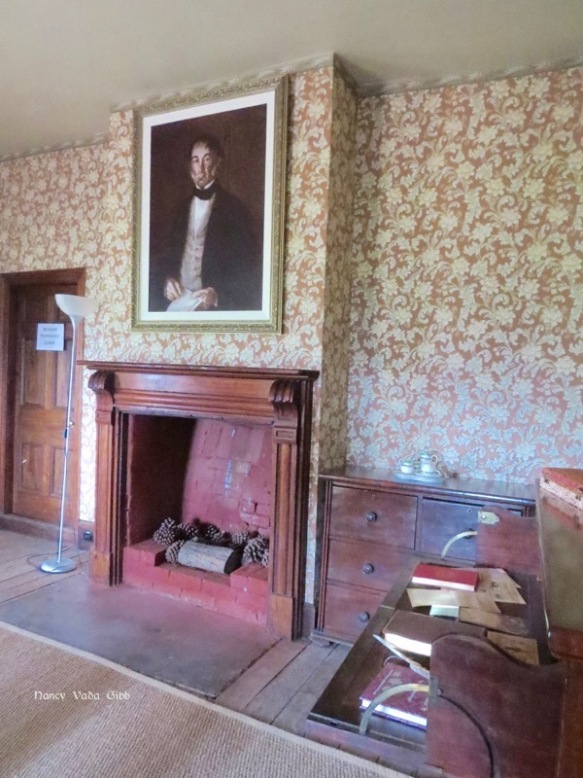 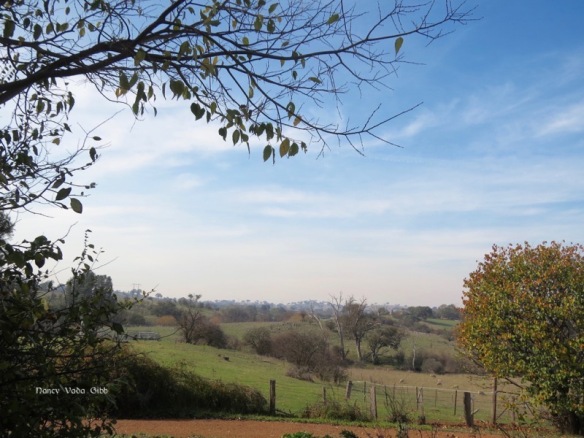 Finally on to Yass itself.  A charming town full of old buildings. We visited the Museum which had an interesting display of old hotels in the town, but alas Nanno’s was not mentioned. 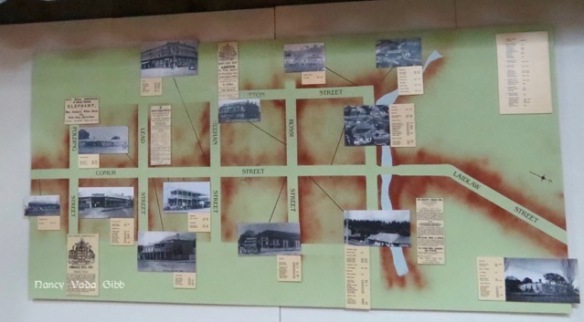 Keeping an Inn must have been interesting in those days, quite apart from the danger from bushrangers. Family legend has it that Nanno was held up at least once.

I did discover a small display about the Rev. Brigstocke who baptised some of Thomas and Susan Darchy’s children. In those horse-and-buggy days the distances were so vast that whichever travelling priest/minister arrived first was given the honour. The religion didn’t matter that much!

After lunch in an old building converted to a modern cafe with excellent food, it was time for the Great Five Mile Creek Hunt. We drove as far as Bookham then turned off the highway. Bookham is just a couple of homes, a huge junkyard for old farm machinery, a church and little else. We explored a couple of narrow roads but the feeling was that Five Mile was further along the highway. 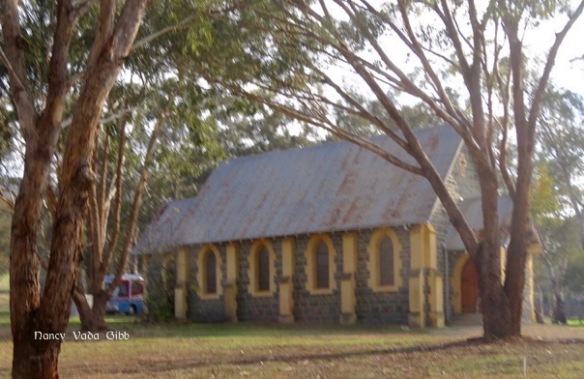 It was! We almost missed it. The old Hume Highway, which mostly followed the Old South Road, was just the other side of a narrow reedy creek. On the banks of this creek were several non-native  bushes ….. was that the site of the Inn? Boolara Road led off from the highway and we followed it for some way but decided the Inn was most likely close to the highway. 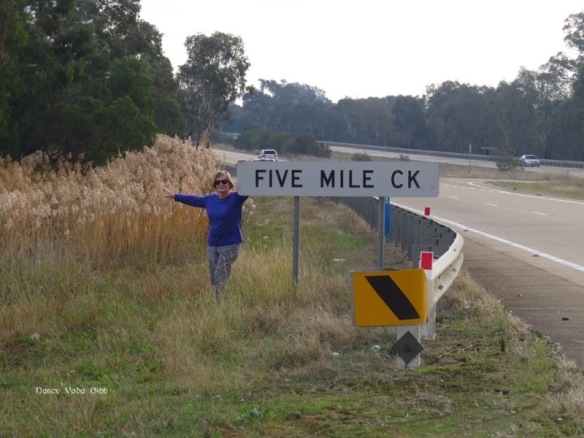 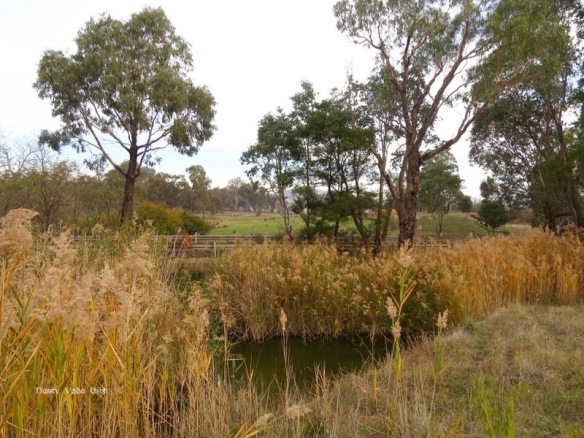 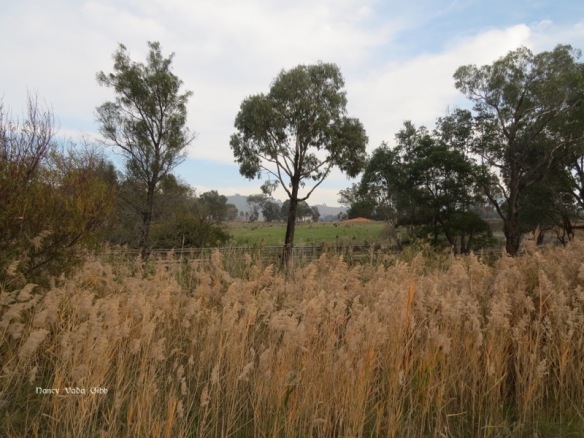 We could not drive down the old highway as the way was blocked by a gate and a notice – with a phone number for a local farm. Julie phoned the farm for me next day and made contact with people who “know the history of the place” . A I write this I’m waiting to hear back from them via email. They may know the exact location of the Inn. 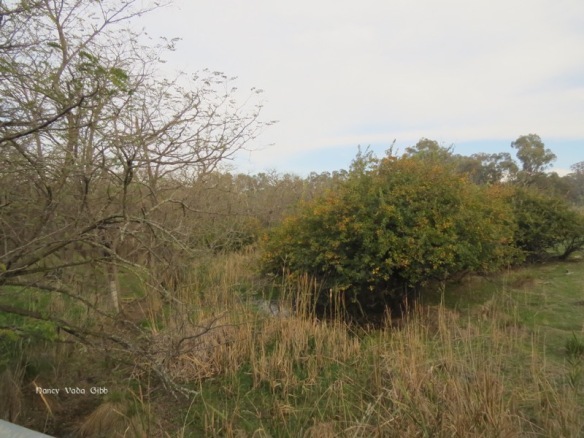 We continued along to Jugiong, just to make sure we hadn’t missed anything. At Jugiong there is a large camping ground for caravans, some houses, a very old hotel being restored, and not much else apart from an interesting sculpture and series of notices describing the death of the local policeman Sergeant Edmund Parry “killed in the courageous execution of his duty” in 1864 at the hands of bushrangers. 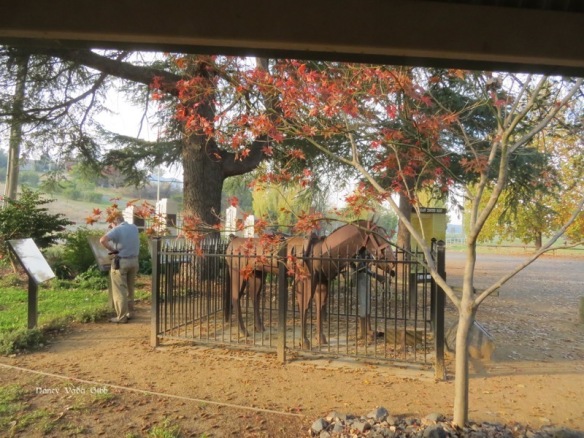 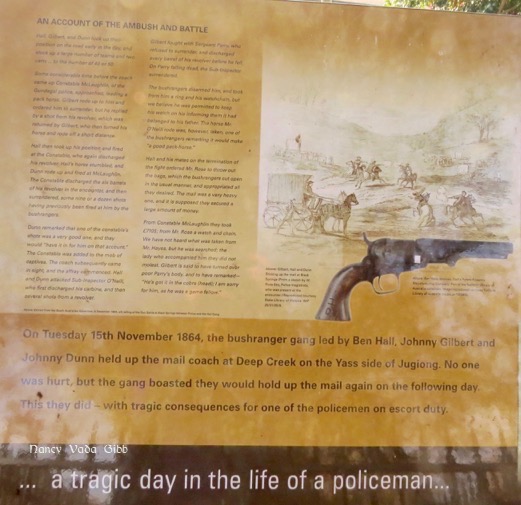 Being in Canberra, a visit to a least some of the National treasures is mandatory. We spent a lovely morning wandering about the National Art Gallery, which houses all sorts of art ranging from some Monets (including Waterlillies) to Blue Poles to Nolan’s entire range of Ned Kelly paintings. also lots of modern australian artists, some of whom I have not heard, others whose names I remember well from Mrs Adams’Art classes at school. Then it was back home for afternoon tea with friends from Armidale University days, who neither Julie nor I have seen for over forty years!

Today Dave has gone off to explore the Australian War Memorial Museum on his own while I am working on this blog. We are thinking of heading north soon to Temora to see a special Air museum and meet up with Dave’s relatives who like us are touring with a caravan.