Since I was a young schoolgirl I have known about the “romantic folk hero” (aka bushranger, criminal and police murderer) Ned Kelly; and the place names Glenrowan, Beechworth and Jindabyne have reverberated in my mind. So it was with a sense of disbelief that I realised we were actually THERE, in Ned Kelly country. 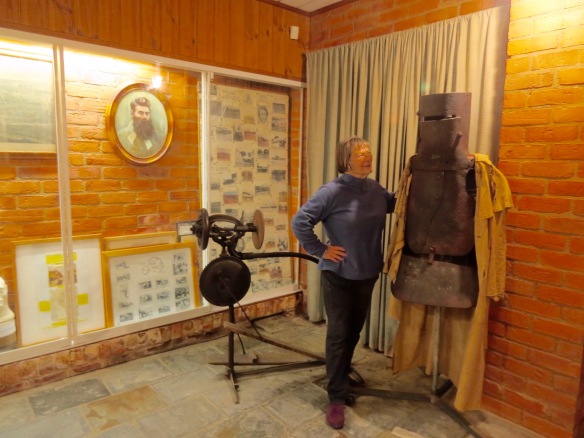 Our first night on the road was spent in a charming camp in Glenrowan in a beautiful bushland setting, with kangaroos and no doubt other animals (don’t even think of snakes – anyway it was a bit too cold for them by then) surrounding us.

It was a bit of a shock to see very modern caravans and motorhomes hooked up to their own water inlets and with grey water hoses trailing off into garden or bushland areas, something definitely not condoned in NZ. So many of the caravans and motorhomes we saw on our recent hunt had small fresh water tanks and no grey water tanks. The idea of being completely self-contained is apparently a new one here. Grey water is water from the kitchen sink and bathroom shower and basin; black water is the other stuff which goes into a cassette which has to be emptied every couple of days. I was so glad for T5’s big black water tank which meant we could be totally independent for up to six days.

The weather was not friendly and we also discovered a leak which seemed to come from the TV aerial area or possibly was caused by our brush with overhanging branches when trying to get out of the driveway at Mornington. Certainly the last few days have been very rainy. Dave borrowed a ladder but could not see anything definite. We shall have to wait and see it it happens again next time we encounter heavy rain.

Glenrowan is off the main highway and is a much smaller town than i expected, consisting mainly of two over-priced tourist shops each with their own Ned Kelly museum, a sound-and-light ‘experience’ in a pub setting (which we declined), a quite good antique shop where we purchased some pretty oldish egg cups, and a couple of food places but nothing special. There is also a well-signposted walkabout explaining various points around town where the big siege took place. Here, for example, was the police station. 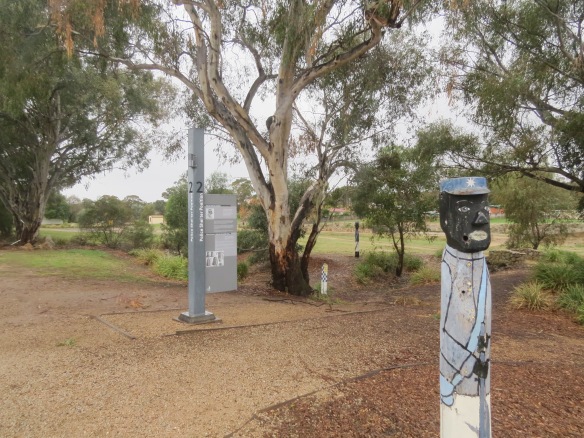 This was a slightly more recent police station; it had stables at the rear for the police horses.

This is the hill where Ned kept a lookout for the troopers pursuing the gang.

The museum we visited had a wonderful Kelly family tree covering one wall, which drew the genealogist in me to it like a magnet. I have visions of something similar in the long hallway once we move back into our home in Christchurch … maybe! 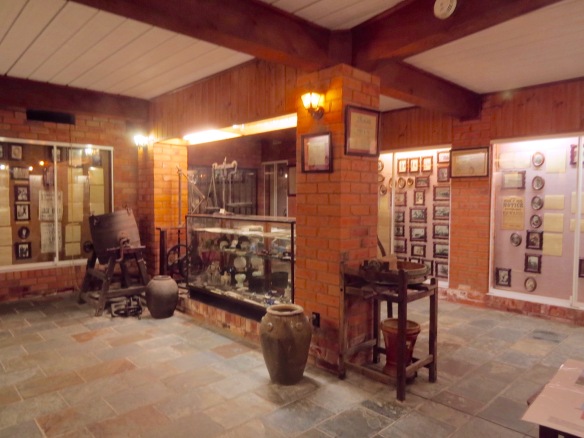 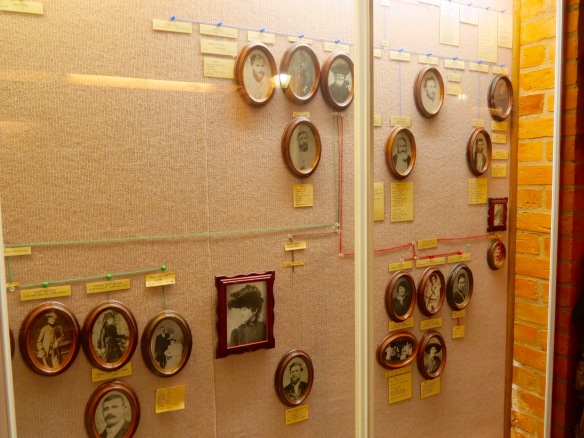 This old gum has such beautiful colours. Did it witness the siege?

Surprisingly quite a few people seem to have made Glenrowan their home. This is the fence in front of a modern brick home.

Then we moved on to Beechworth where Ned and his mother Ellen spent time in prison. The old town precinct has been restored and looked beautiful in the autumn light. The size of the old cobbled drains reflect on the rainfall in the district. 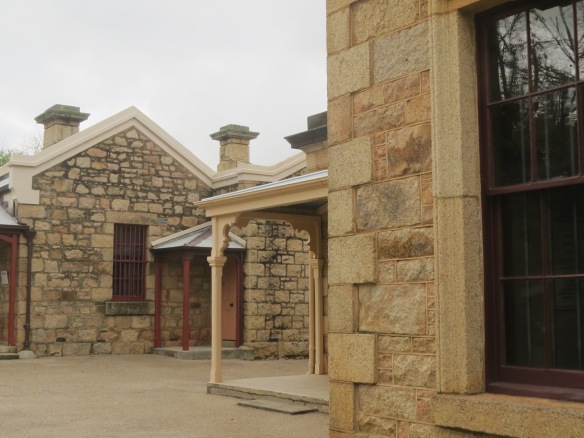 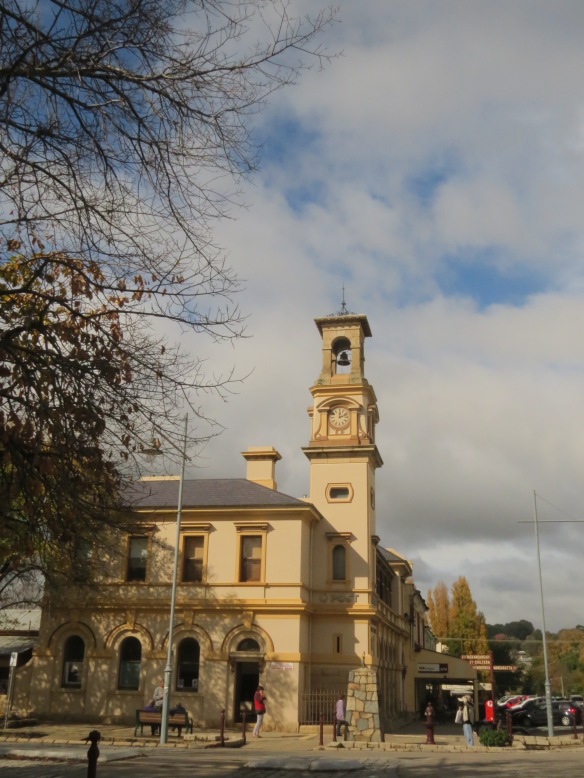 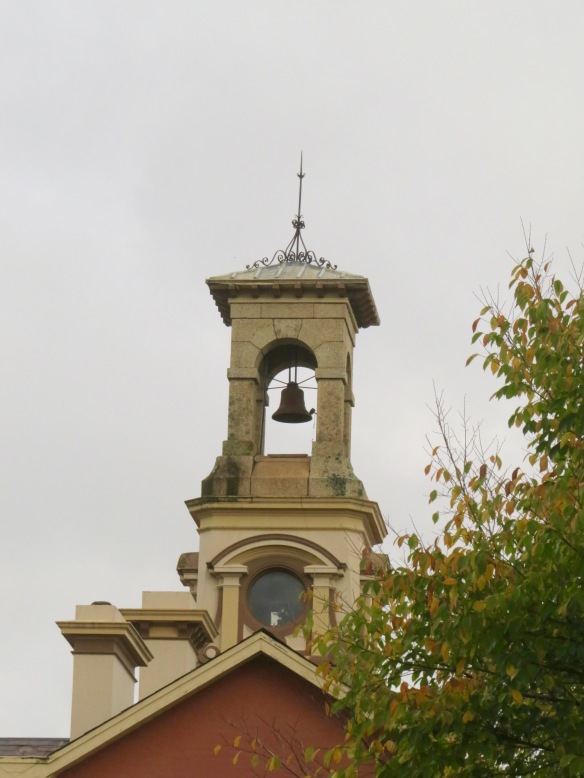 Spotted in some shop windows: some cute teddies and parrotty candlesticks. 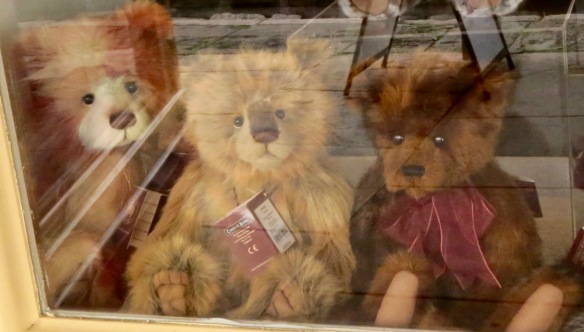 The courtyard of a guest house was a little confusing – were they trying to be Kelly-ish, topiary-ish, Italianate or just garden gnome variety?

By then I was feeling a bit sated with Ned Kelly. Jindabyne up north will have to wait for a later visit.

We left Beechworth heading along the Snowy Mountains Highway to Tallangatta and Corryong. By the way, Dave’s driving glasses still haven’t turned up, he may have to order another pair.