I started typing this blog sitting in the ute waiting for the ferryman … no, I’m not about to hop off the twig, we are at the small vehicular punt at Tuapeka Mouth on the Clutha River between Balclutha and Lawrence. It’s drizzling slightly but otherwise lovely and warm, quite a change to the last few days when a very cold wind kept the temperature down.

We spent over a week in the Catlins, it’s going to take several blogs to describe it all. Yet we only saw a small part of the whole, mainly due to the weather.

When we left Oamaru we drove via Balclutha and Owaka to the eastern part of the Catlins where Dave thought the newish NZMCA camp of Niagara Falls was situated. Actually it is much closer to Waikawa so T5 thundered along the narrow never-ending coastal road in unremitting but thankfully mainly light rain for what seemed like hours, past many enticing vistas not worth stopping for in that weather. We finally reached the camp and set up T5 for the next few days. This was a very convenient place from which to explore the Catlins free from the encumbrance of towing a weighty caravan on the narrow twisty roads. A huge cabbage tree guarded the camp site. 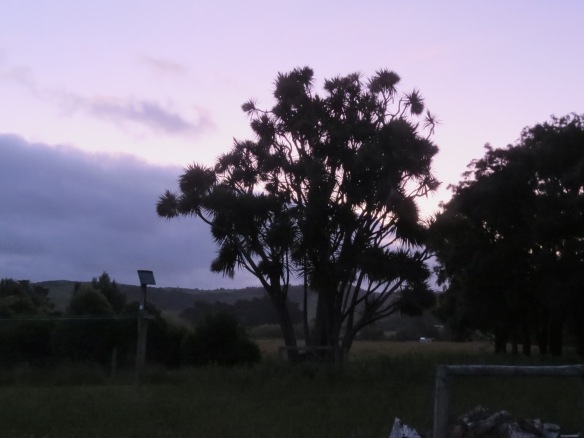 Niagara Falls in NZ, named by a surveyor with an obvious sense of humour, are a little different in size to their North American counterpart. The river was the early settlers’ river-highway and many built their houses along the banks. They took their wool by punt from Niagara Falls to be loaded onto ships at Waikawa. The Maori name for the falls is Mangai Piri referring to the manner in which migrating lamprey eels wriggle up the falls in a mass, using their suckers to hang onto the rocks. 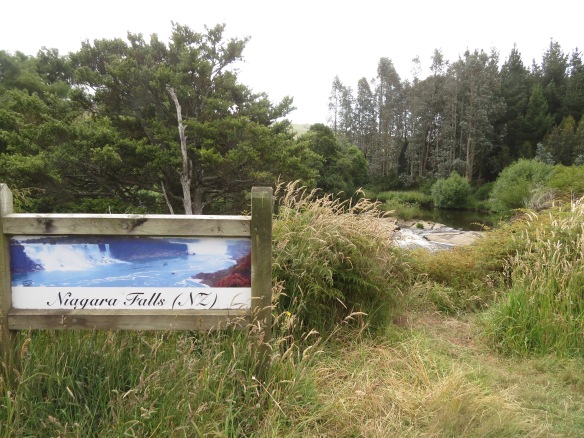 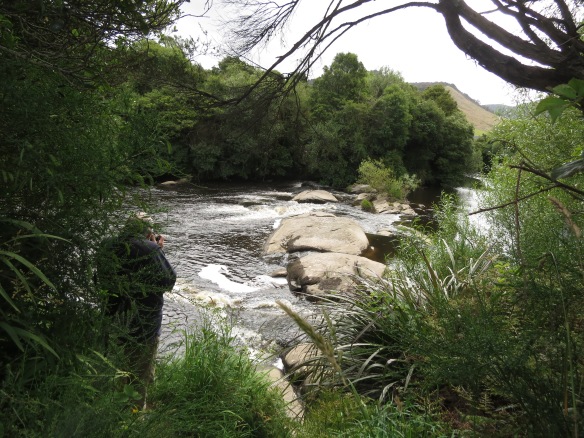 Driving in to Invercargill for the day, the number of ‘permanent’ white-baiting huts along the banks of the Mataura river was amazing. Some were actually on the other side of the road from the river and were even equipped with TV receivers. The main road goes over the Titiroa Stream where there are even more permanent huts. Obviously the sound of traffic does not scare off the whitebait (!). 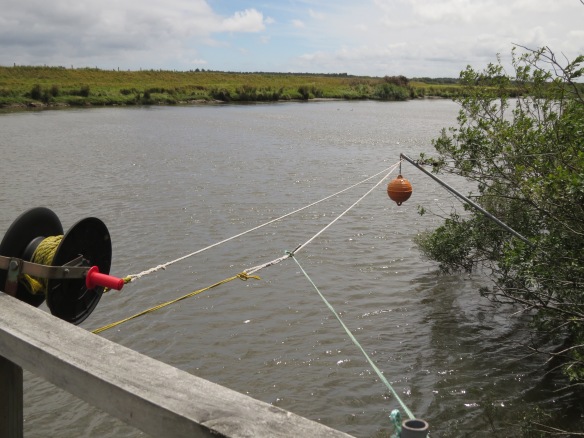 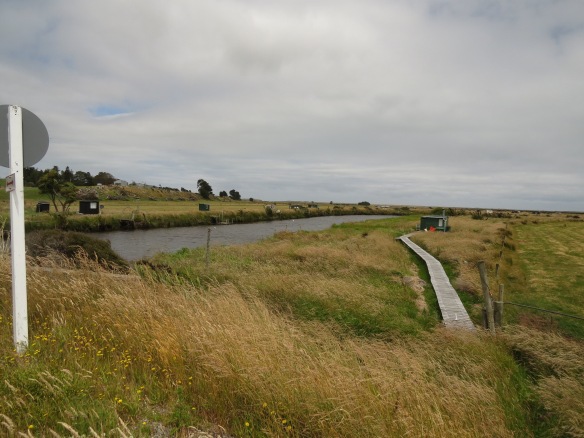 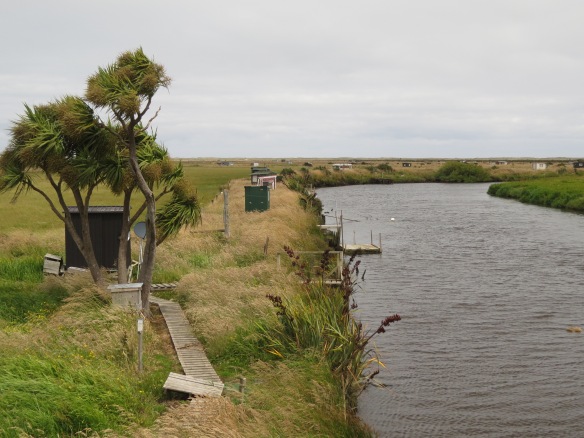 Many of the roads in the Catlins are lined by toitoi and giant flax, the latter at this time of year all sporting huge red-brown flower spikes. Flax is also used for shelter belts instead off the more usual clipped hedges.

The grass everywhere was a brilliant green, unless it had already been harvested in which case the golden fields were often dotted with pale green ‘dinosaur eggs’, mostly stacked in neat rows with gaps between them, in contrast to the tightly packed caterpillar rows of other parts of NZ.

Near Riverton one day we spotted the latest fashion colour in marshmallows (the big ones used to feed the baby dinosaurs when they hatch …. as a friend was informed by her grandchildren).

On a day when the weather was more promising than usual, we headed back east on the main Kaka Point road, stopping off to visit McLean Falls some way before Papatowai. Named after Alexander McLean, grandson of an early Fencible recruit from Ireland who arrived in NZ in 1848. He was a farmer of considerable ability, never married, churned his own butter and made his own bread. He was also very artistic. he was very hospitable and always made visitors welcome, hence his name became attached to the Falls. 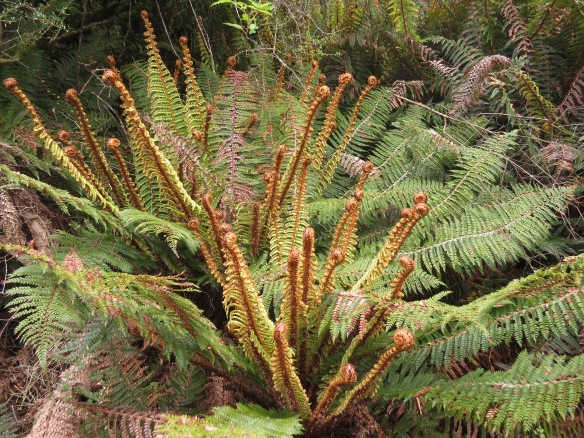 The track to the Falls would through beautiful bush (a blurred photo can give atmosphere, right?) to the lower part of the falls called the Chute, then upwards via a very narrow slippery track on which only Dave and Penny ventured. 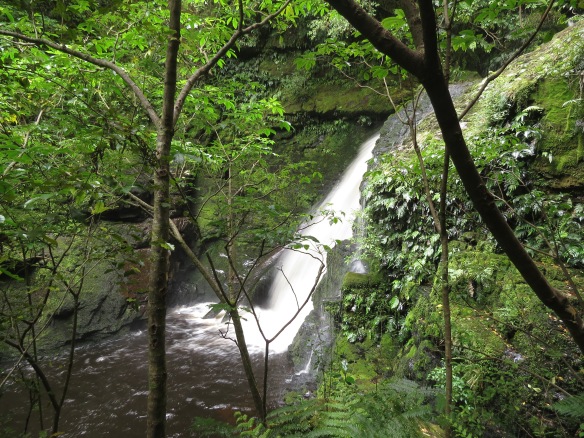 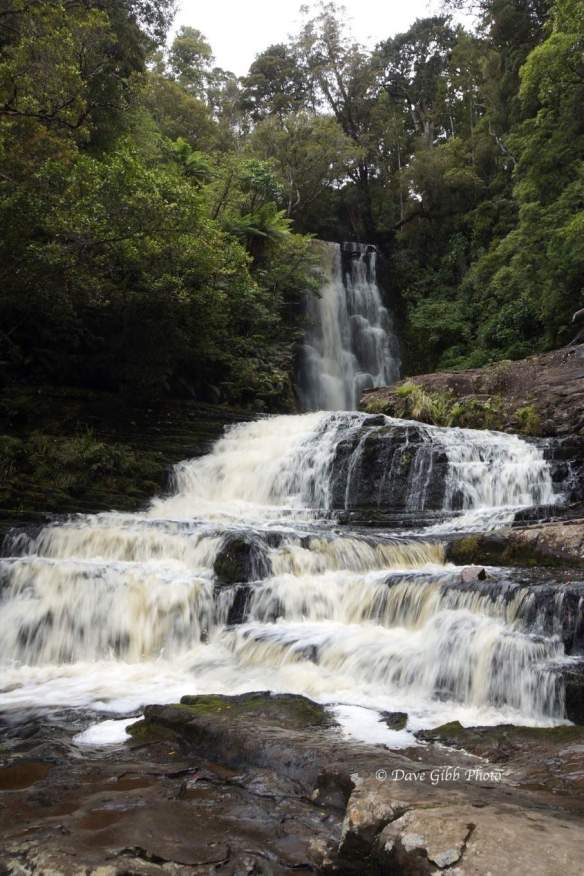 Further on still heading east we decided to give Lake Wilkie a miss, also Cathedral Cove which we have both seen on earlier visits to the Catlins and anyway the tide was wrong for a visit. Instead we stopped off at the Purakaunui Falls. Not large but very beautiful.

We only went a little further that day, to Owaka for lunch and then a visit to the famed museum. A well-labelled display of early tools caught my eye. Do YOU know what a rabbiting adze looks like?

The shipping section had many artifacts from wrecks, of course, but it also had some interesting information such as about Captain Catlin (1792-1856) and Tommy Chasland (1797-1869), ”The best whaler in New Zealand ….  who spent a lifetime on sealing and whaling ships as well as several shore-based whaling stations. His strength and legendary telescopic vision was a useful attribute for a sealer and whaler. “

We drove back via Catlins Lake which is not really a lake but a saltwater tidal estuary, with old jetty piles from the 1870s …. 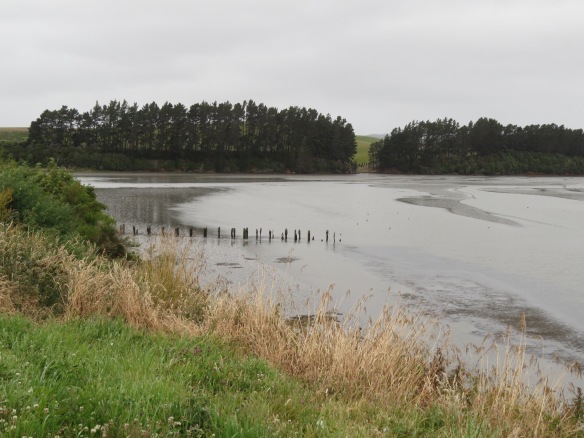 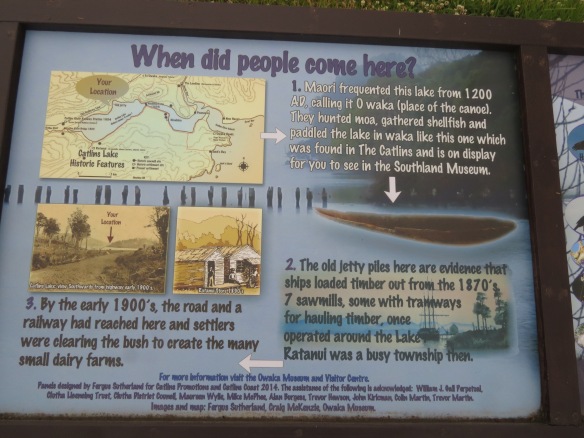 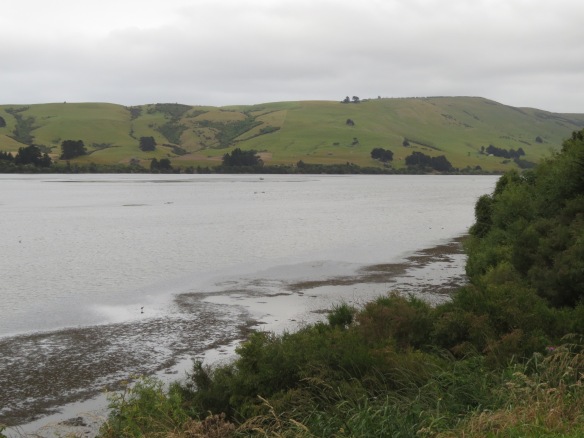 … and Florence Hill lookout from which one can view Chasland’s Mistake where en route from Port Chalmers (Dunedin) to Melbourne on 4 Dec 1876, the SS Otago was wrecked. All passengers and crew survived. The area overlooked by Florence Hill is considered a special place as it is the only place left on the east coast of  the south island where native forest fully covers a catchment from hilltops to sea. Ancient forest with trees over 1000 years old grow right down to the seashore, and large unmodified estuary wetlands line the Tautuku river. 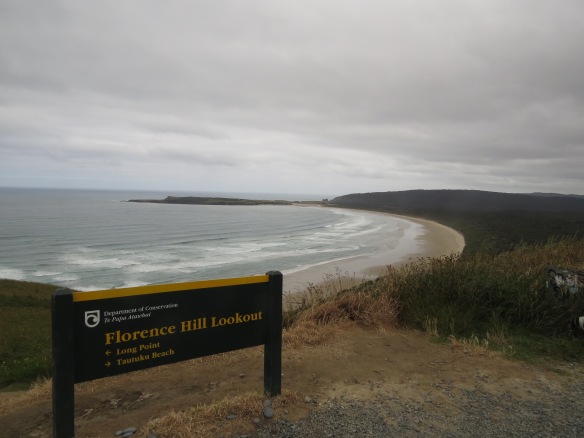 Back to a nice dry T5 – we’d had enough of the rain for a while.