After a few days in the driveway at No. 40, and having survived an identity check by a neighbour (good for him), given the garden a good watering and enjoyed a couple of long hot showers, it was time to move on.

The things you encounter on the highway ….. like the vintage car which burbled along and held up miles and miles of traffic, and a house … 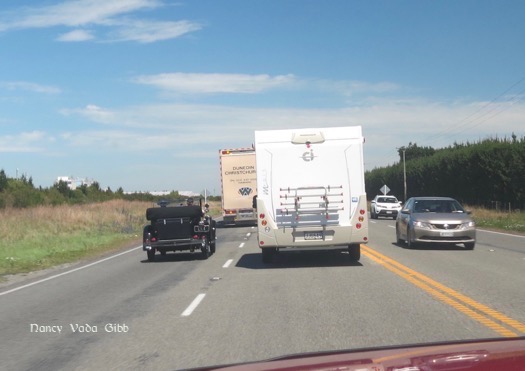 We settled in at the NZMCA park at Oamaru A&P showgrounds, a huge open space with only a few other caravans/campervans for company. In a van nearby were two dogs so Penny soon had some new friends.

The day we arrived was fine and hot, a perfect summer day. The next day was unbelievably cold with a wind straight from Antarctica, or so it felt! NZ’s changeable weather at its best.

A visit to the Steampunk museum seemed in order, but first we wandered the old Oamaru precinct. it has such an old-world feel to it, I always expect to see ladies in crinolines and gentlemen in stove pipe hats – as indeed there are but only on Festival days. We really will have to time our visits better. There are some very enticing shops, and also a plethora of old bookshops where it is lovely to see old books and magazines spread out in enticing displays instead of all jammed together as in post-quake Christchurch. Lots of bargains too. 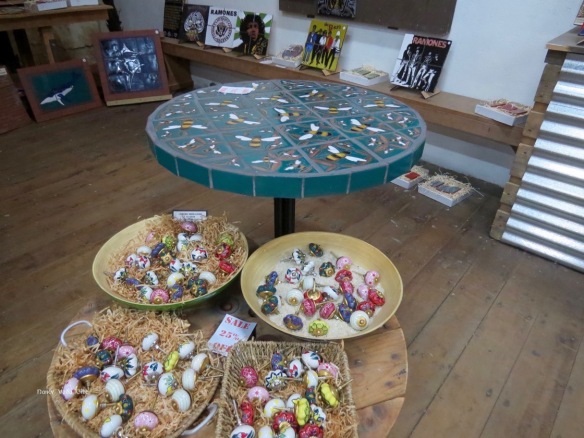 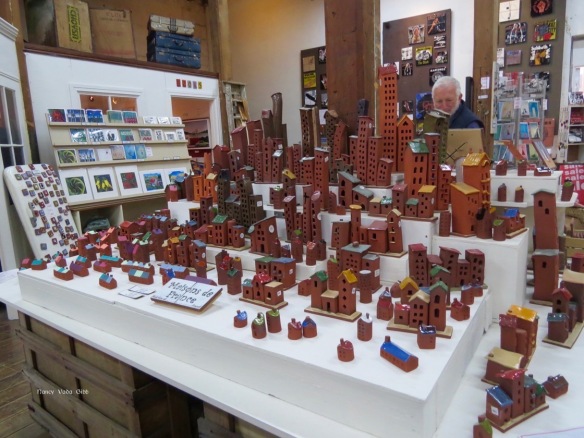 We also had a brief look at the waterfront and discovered a number of veteran and vintage cars, which we later learnt were on their way to a big rally in Dunedin. Among them was a shiny black Chevrolet with whitewall tyres which had Dave in raptures as it was almost the same model his father had owned many years ago, except that this one was a coupe. 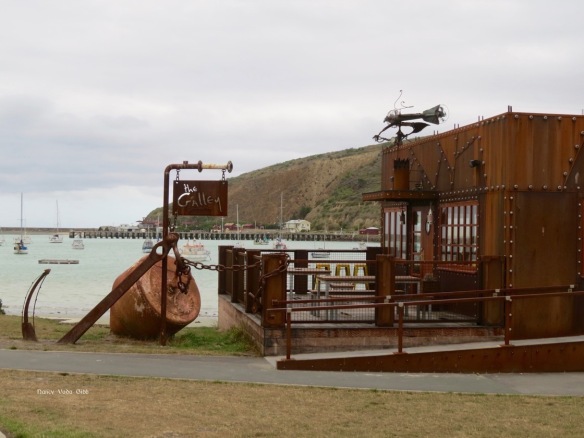 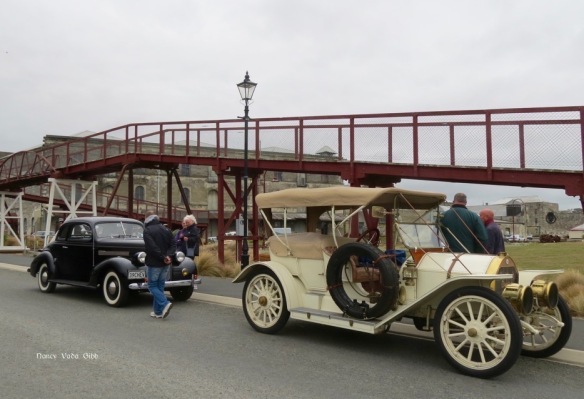 The museum – well, what can one say. Dark and mysterious and fairly enticing but only just. The one magic thing was the Portal; you enter through a controlled doorway and for about 4 minutes stand mesmerised by a magical display of coloured lights. 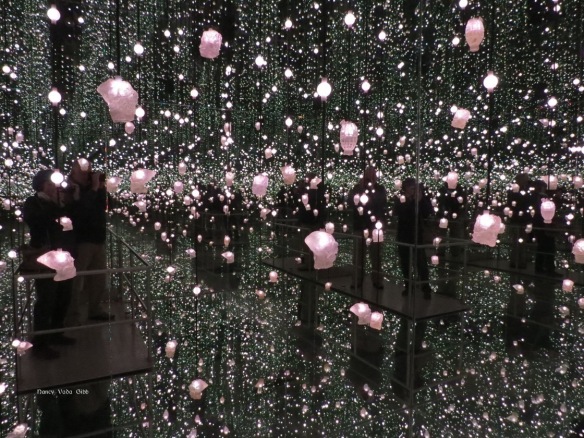 More stuff from inside the museum: 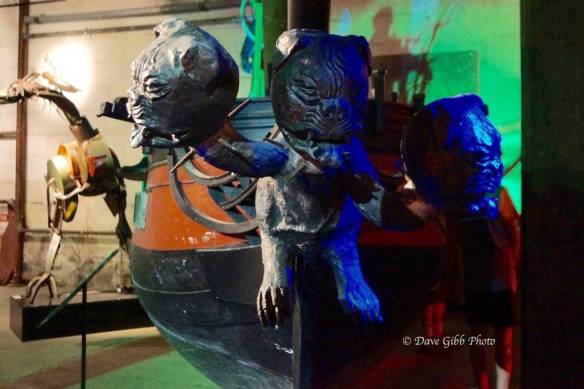 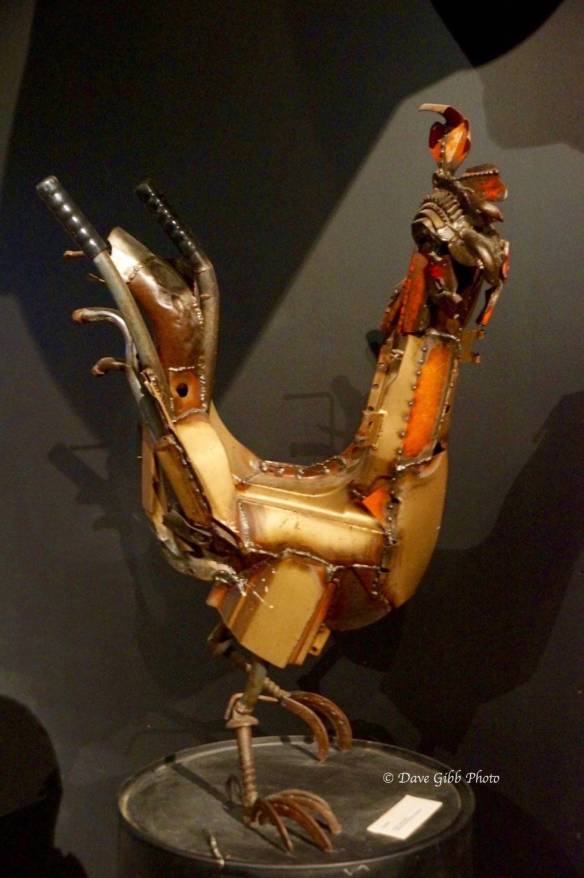 Outside in the yard was more, including our new car, and some gigantic flies on the wall: 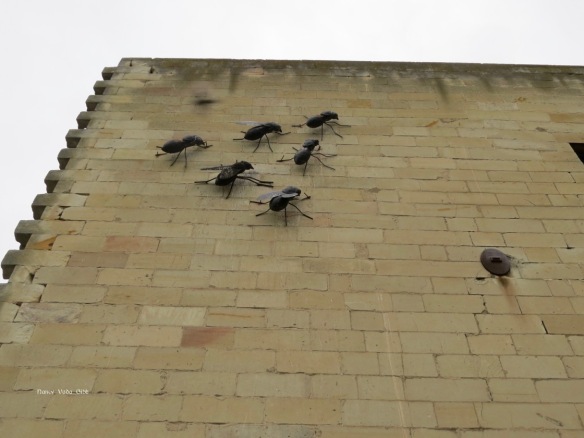 One of the best displays is at the front of the museum, a gigantic steam engine – sort of. For 2 dollars you can get the monster to emit some flames and clouds of steam. All very well on that freezing day but by then all I could think of was some hot coffee and – yes, really – a shared bowl of hot chips. Just the thing. 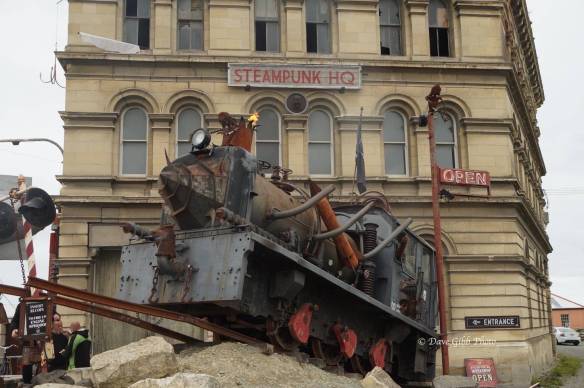 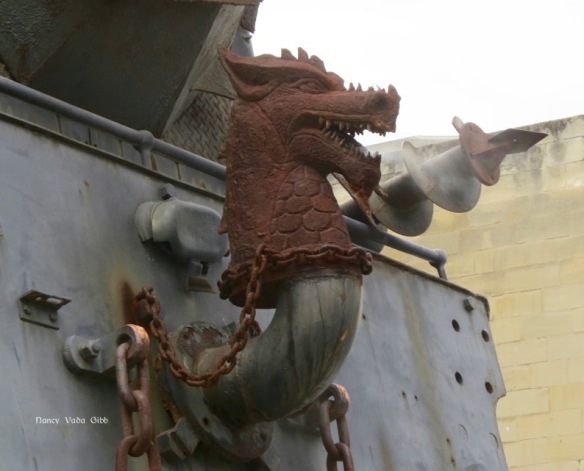 Next day we thought to visit the Library so we could catch up on various Facebook videos and post a blog. Which I did. We returned to T5 via the Whitestone cheese factory and succumbed to a herbed muffin with a generous portion of melting brie inside. which was just as well because when we returned to T5 we could not find the door key!!! AND only that morning I’d been reading in a blog about someone who’d lost a hearing aid and had a whole camp-full of people searching for it (yes it was found eventually, stuck to the underside of the car dashboard). No such luck with our keys, but at least we did have a spare set. After retracing our steps to the library and cheese factory and visiting the police station just in case, we had a new set of keys cut which will be kept in a “safe place”.

After a quick revisit to the police station next morning we were off heading for the Catlins. It rained most of the way so no photos (so far!) but we are hoping the weather forecast for the next few days is accurate.