Arriving at Pongaroa we had no idea where the Domain was … ask at the pub? But then we espied what could only be another retired caravanning couple (they always seem to have an ummistakable air of elan), who simply waved us onwards – “Keep going!” and just out of town we foiund the Domain already half full of the usual huge collection of motorhomes and caravans. More arrived over the next few hours. Since we’d been in Pongaroa before and explored the main attractions, this time we took it pretty easy with just walks with Penny, some baking and dinner the last night at the local pub which had a reputation for awesome food.

The restaurant was fully booked for an early sitting so we settled for a late sitting at 7.30 pm. We arrived on the dot and ordered at the bar, as is the custom there. After waiting some 10 minutes while our table was vacated we were shown into the dining room, where we waited … and waited …. after 50 minutes one of the bar girls came in to check whether I had ordered the seafood chowder or seafood basket??! – our order had been sitting on the bar all that time. However, the kitchern must have worked fast as 10 minutes later our food finally arrived with many apologies and the offer of free drinks. We’d already had plenty so asked for free desserts instead, but unfortunately for us it transpired they’ d run out of vanilla icecream for the affogato I coveted and only had sickly sweet blueberry ripple icecream!

We joined about 40 members for a mini-sfari through the famed Akito station, now run by a fifth generation family member. The 5-triangled entrance sign represented the 5 generations.

Perched on the cliffs overlooking the ocean, with some extensive pine forest as well as hilly grazing, it was supposed to be a memorable trip. So it was but not for the usual reasons. Mist!! For most of the transverse of the station and particularly along the cliff top it was difficult to see more than a metre in front. 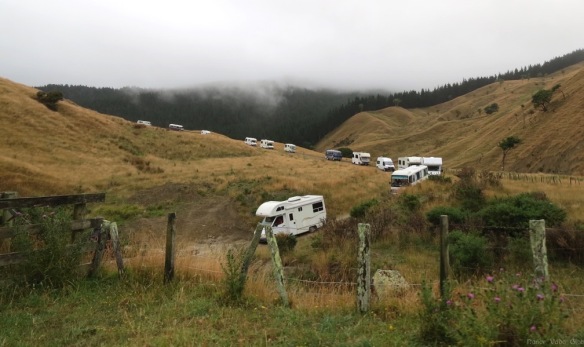 Initially it was not too difficult. The windswept Akito beach with its huge piles of driftwood and interesting rainbows in the spume bubbles made a good stop for morning tea. Hoof prints showed we had just missed a horse having some jumping practice. 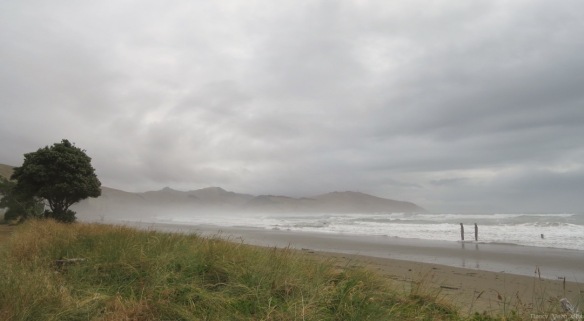 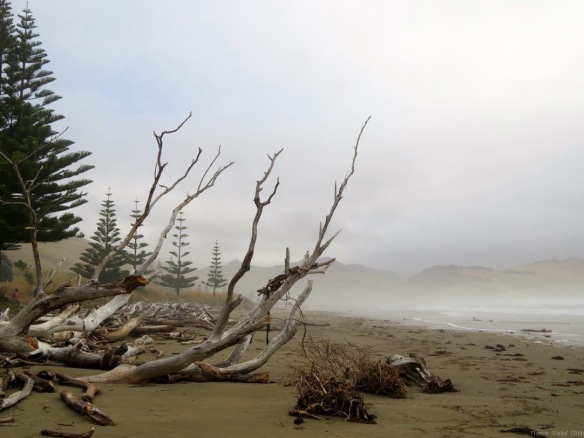 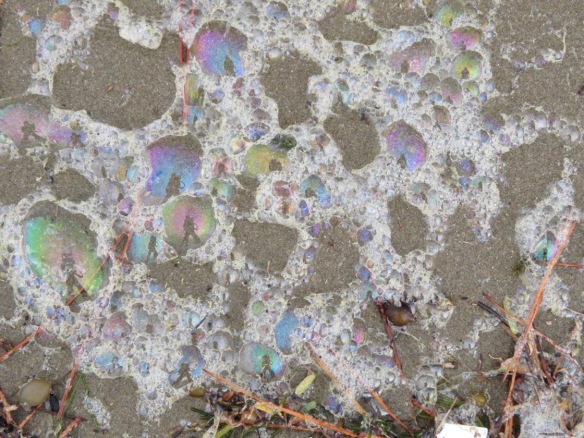 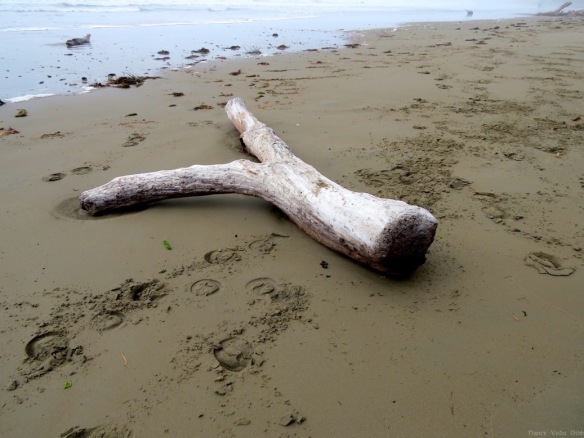 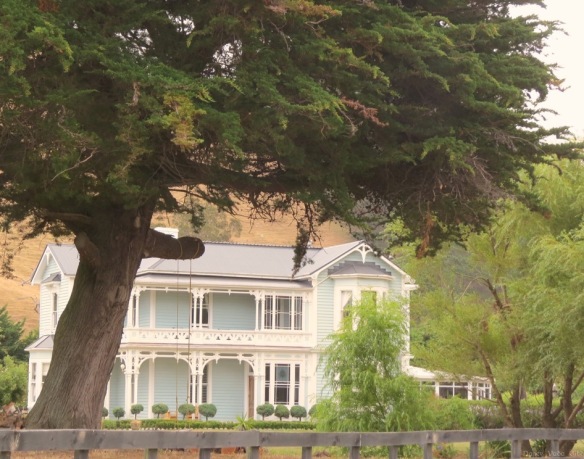 …..and a little further on we all assembled on the site of an old airfield where a tattered windsock still waves forlornly in the wind.

A member of the Akito ruling family gave an interesting talk finally curtailed by increasing rain (“Don’t worry it’s only Scotch mist!”). And off we all set uphill into heavy mist which only dispersed on the lower reaches where it was possible to take photos of the extensive pastures and nearby beaches.

After leaving Akito Station the road continued for some way beside the coast.

Spotted on a nearby hill; a lovely little blue caravan.

We revisited the tiny little settlement of Herbertville but discovered access to Cape Turnagain (lovely name!) was not possible. Named by Captain James Cook in 1769, he sailed south to this point before deciding to turn and head north around NZ. It is a prominent headland part way betrween Hawkes Bay and Cook Strait.

A little further back towards Pongaroa a lonely memorial caught our attention; it commemorated the lives of the Herrick family who lived there at Tautane “… in splendid isolation” in the early 1900s. It noted that “Transporting wool was one of the many challenges presented by farming in such a remote location. This had to be taken by lighters from a jetty at Cape Turnagain to a waiting coaster to be shipped. “

Another day we left T5 sitting in the middle of the rugby field and drove to Dannevirke where we found a good laundrette and excellent library and did some shopping. Along the way it was interesting to see a new pine plantation on the steep banks bordering a stream, while the flatter land above was kept for grazing.