Dave is a member of the NZ Founders Society, which represents descendants of the early NZ settlers who arrived before the end of 1865. Established in March 1939 to honour the work and achievements of NZ pioneer ancestors “… whose contribution helped shape our nation and its history”,  it now has various branches including Canterbury.

We were invited to join a group on a guided tour of Riccarton House in Christchurch.  “Riccarton House and Bush / Pūtaringamotu is a unique New Zealand heritage site consisting of two historic buildings, flanked by beautiful open parkland and ornate gardens, bordered by Ōtākaro / Avon River and set against extensive native bush forest featuring kahikatea trees up to 600 years old. This tranquil 12 hectare reserve is located just 3.5 km from Christchurch city centre.”

The House was badly damaged in the February 2011 earthquake and $2.5 million was spent on the full restoration over 3.5 years. Past Manager Rob Daly was in his office at the time of the earthquake and is quoted as saying at no time did he fear for his safety as he had “faith in the robustness of the Old Lady”.

Our tour started in the entrance hall with its fabulous carved wooden walls and ceiling. The majestic moose heads did not dominate but enhanced the space.

The guide, despite being rather oddly dressed in tails, cravat, stout modern shoes, a machine-hemmed breast pocket handkerchief and modern lapel buttons (one featuring a silver fern?) was nevertheless very knowledgeable and entertaining. First we were shown an incompletely renovated room with some glorious old wallpaper, an exposed wall ands various other bits and pieces related to the earthquake and subsequent restoration. 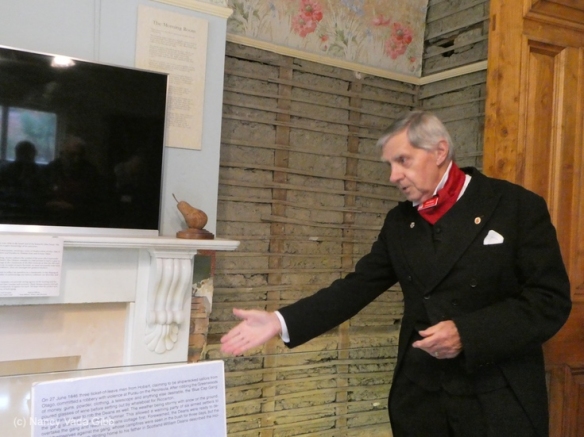 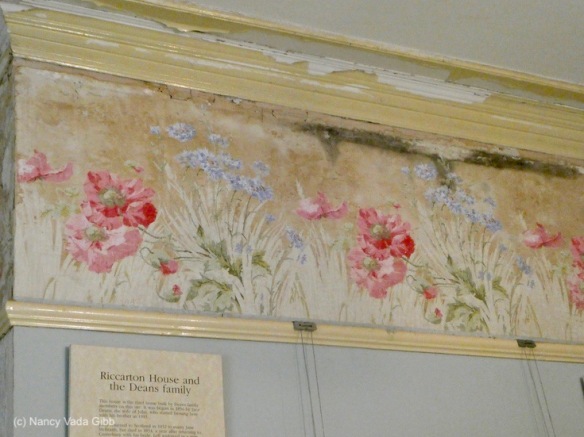 A quick inspection of the library followed. This is part of the oldest part of the house, built by Dave’s GGGrandfather James Johnstone.

Then on to the kitchen with its beautiful William Morris wallpaper, a modern version close to that of the original. 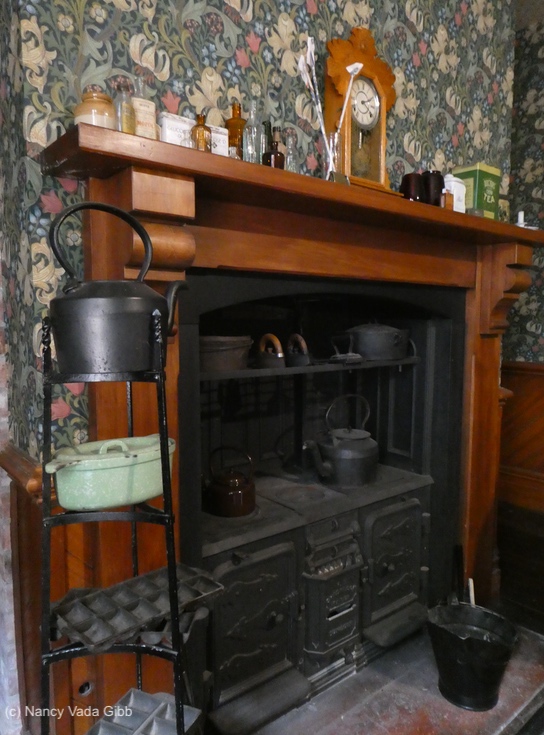 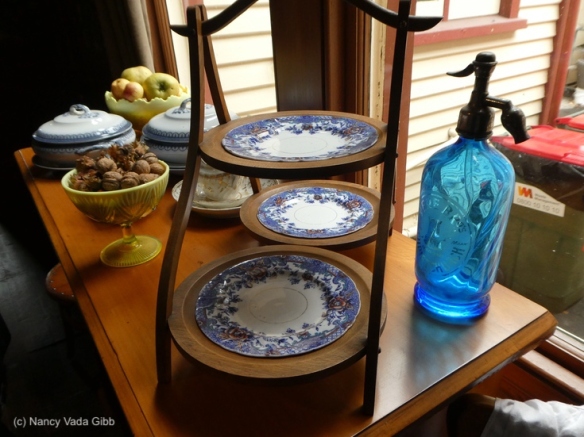 A quick tour of the dining room, scullery and pantry ….

…. then up the magnificent stairway with its huge acorn-topped newel posts; a figure entirely carved from one piece of wood stood guard at the top.

Carving around lintels; and an old heater. 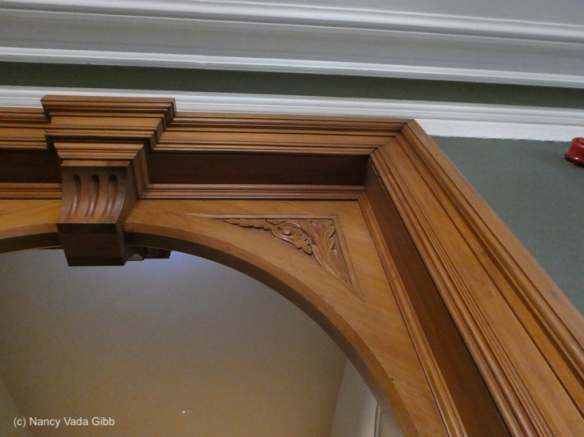 Various bedrooms followed, each with its own distinctive wallpaper, matched where possible to fragments of the old. The ceiling fixtures were newly gilded. 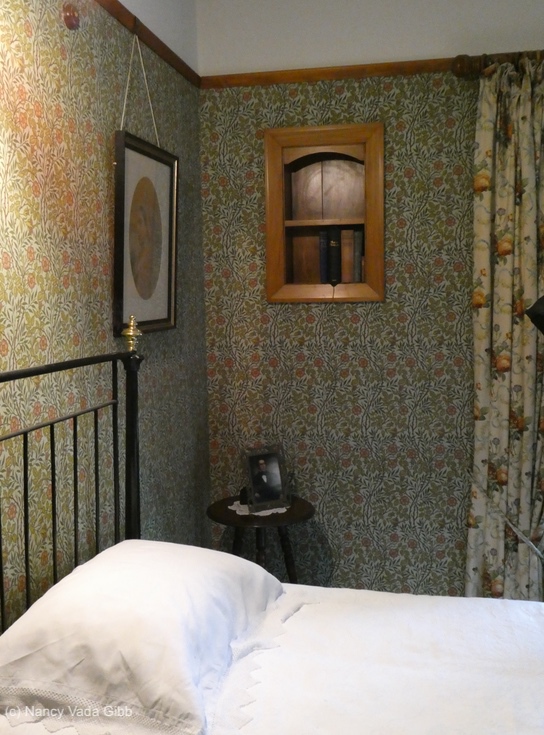 A commodious commode! Flap up, then circular lid removed …. Much more aesthetic  and easier to use one would imagine than a bedpan kept under the bed.

Part of the main bedroom. Not shown is a trapdoor giving access to the cellar, in case of fire.

Up narrow stairs to the attic, which was used mainly as a children’s playroom. The Deans were enlightened employers who did not expect their employees to live in cramped attic accommodation but provided good-sized rooms – as shown by the Nanny’s room (shown later). 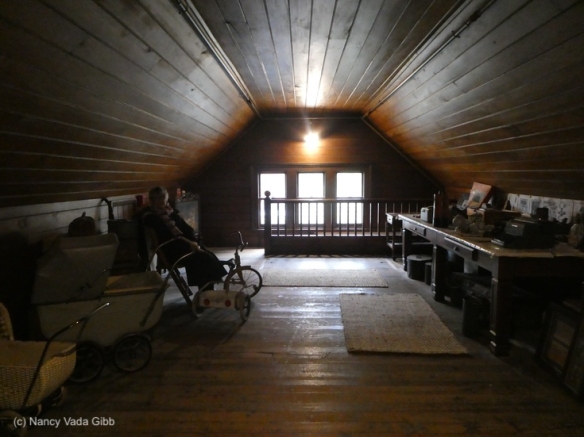 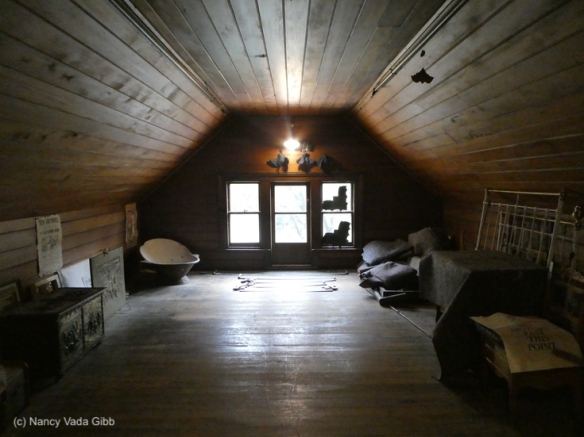 Here’s an array of old posters with luggage underneath. A surprise find for Dave and me was a trunk used on the “Merope” which brought the first Gibb family to NZ – did John Gibb know the owner of the trunk, Walter Heavem?

Back down the stairs to more beautiful bedrooms and a bathroom and toilets (not shown). Almost all wardrobes were built-in. Some bedrooms have been turned into offices, there were originally 13.

In a wardrobe:  a christening gown worn by generations of Deans and their descendants and relatives. 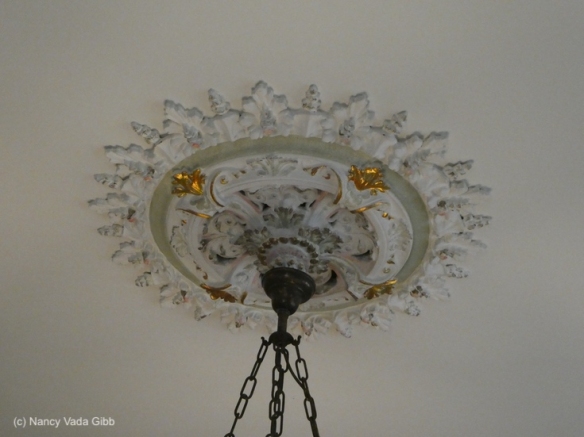 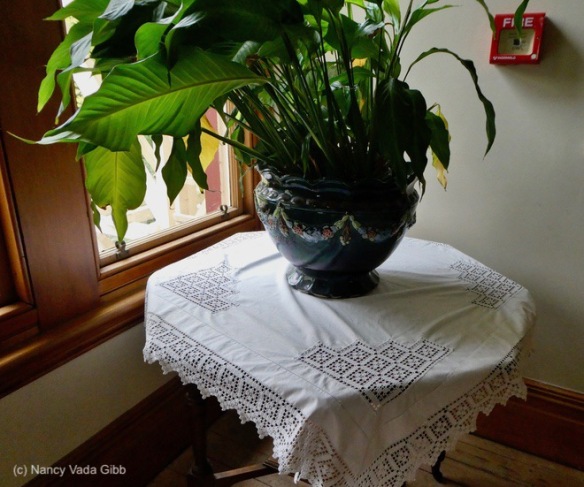 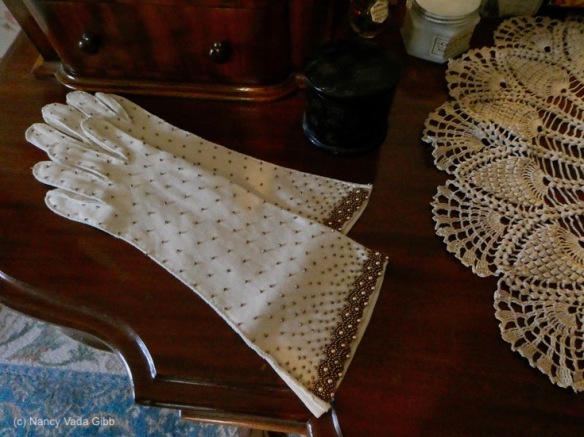 Part of the nursery, complete with potties….  and in a nearby linen cupboard, a package of early disposable nappies.

The Nanny’s room, with narrow iron bed, sewing machine and views over the garden.

Back downstairs to the tea room with its particularly ornate ceiling rose. One member of the Founders recalled having tea there when he was eight! Another had his wedding reception in this room. Here we had restorative cups of coffee and cake. 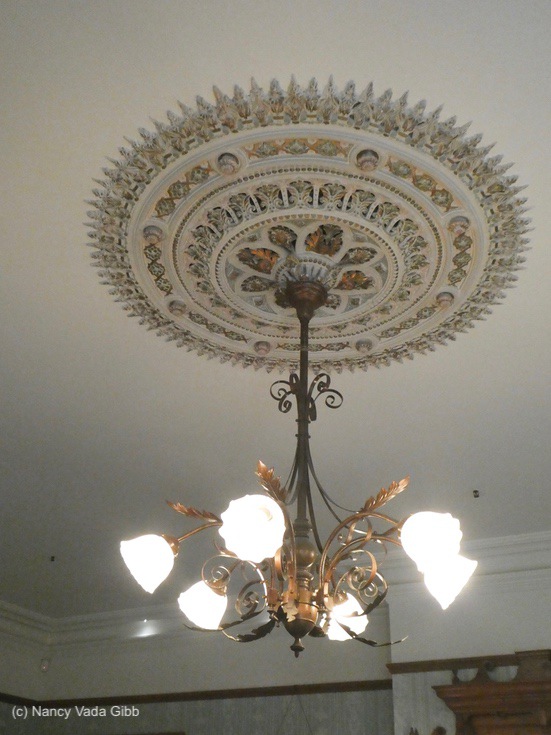 Outside for an inspection of Deans Cottage, the oldest building on the Canterbury Plains. Built for pioneering Scottish brothers William and John Deans in 1843. 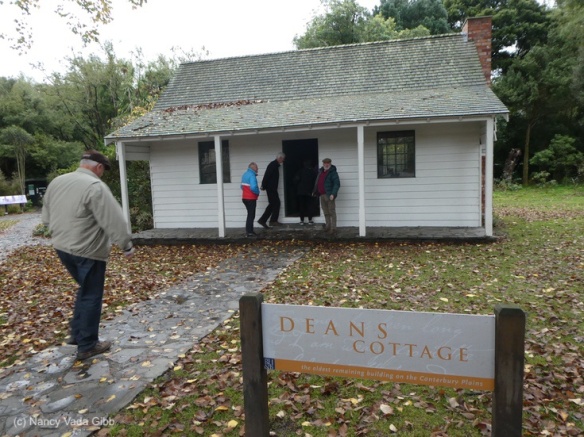 “Built from timber cut in Riccarton Bush and pit sawn into boards, the cottage was the first home shared by the Deans as they strove to establish their farming vision at Riccarton. The brothers lived in the cottage until their early and tragic deaths. William drowned in the shipwreck of the barque “Maria” when she struck a rock near Cape Terawhiti off the Wellington Heads in July 1851. John, who travelled to Scotland in 1852 to marry Jane McIlraith, returned to Riccarton in February 1853 and died in the cottage from tuberculosis in June 1854.

“Jane Deans and her son John continued to live in the cottage until the building of the first stage of Riccarton House was completed and they were able to move to their new home in March 1856.”

Dave’s GGGrandfather James Johnstone (1807-1870) is believed to have been one of the builders.

Then a quick tour of Deans Bush with its majestic Kahikatea trees. The Bush is a remnant of the vegetation of the early Canterbury Plains. It is enclosed in a predator-proof fence.

“As Canterbury’s sole remnant of kahikatea floodplain forest, Riccarton Bush has national significance. For 300,000 years, the shifting gravels of the Waimakariri River triggered a changing mosaic of podocarp forests across the Canterbury Plains. In response to a continual cycle of flooding, forests established wherever suitable conditions were created, only to be destroyed in their turn. These 600-year-old kahikatea trees are the latest generation of a forest that established on this site 3000 years ago. They have survived through two cultural periods, Maori then European, that saw widespread fires sweep the Plains and native vegetation give way to pastoralism and cropping.”