After disembarking at Queenscliff on the SW corner of Port Phillip Bay we were soon on the road heading for a camp at Princetown on the Great Ocean Road which had been recommended by several people. As it was a dark drizzly day we opted for the inland route. It seemed we would never get there! Up and down and around, much of the scenery reminiscent of Otago. We finally reached the camp at dusk and had to dodge lots of kangaroo poo while setting up – they and their deposits were everywhere. (That’s us on the left with the awning). 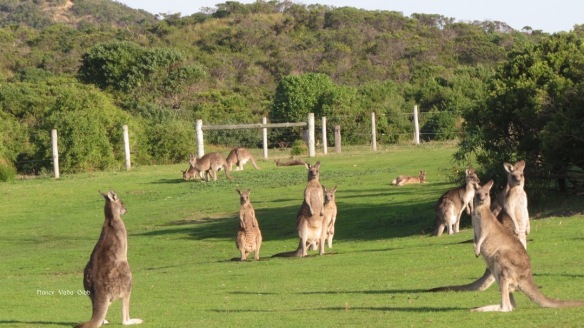 Next day it was off to visit the Apostles at long last. Iconic scenery which I’ve seen in many photos – but you simply have to be THERE to take it all in. (I’m not apologising for the number of photos either). The road does not follow the clifftop exactly but there were designated parking spaces then usually a short walk to viewing places. The first one we went to involved a very steep climb – aargh! – but the view of our first Apostle on the “Shipwreck Coast” was worth it. 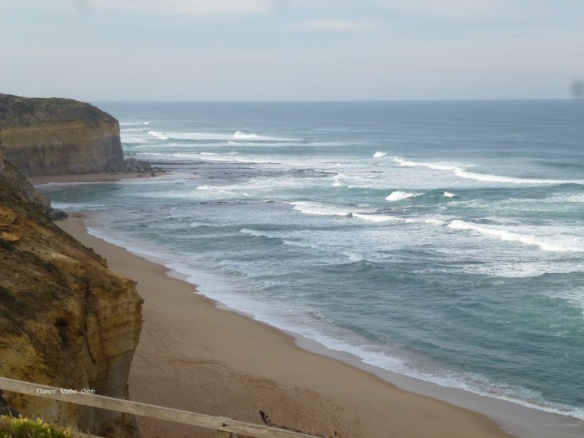 After visiting a few more viewing places we reached the main Apostles viewing base, with plenty of off-road parking, an information centre, a helicopter base, hundreds of  tourists even in this off-season and a tunnel under the main road ….  emerging onto the headland it was amazing to see so many of the monoliths, lit by a watery sun. It was blowing hard and yes really rather cold! 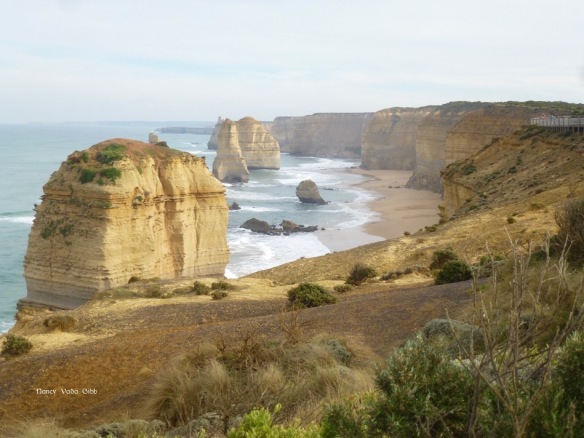 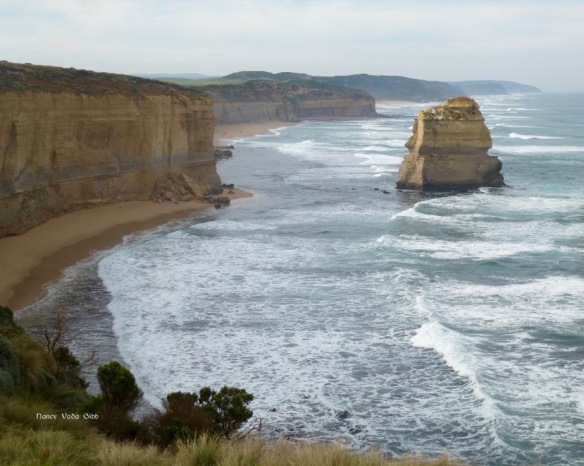 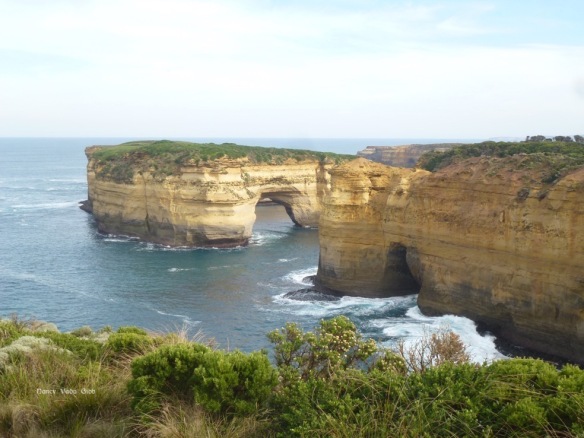 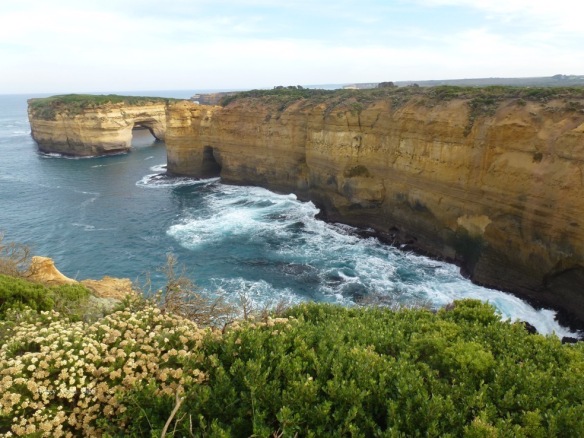 Further on we came to Loch Ard Gorge near where the clipper “Loch Ard” was shipwrecked in 1878. Only two of the 54 people on board survived. 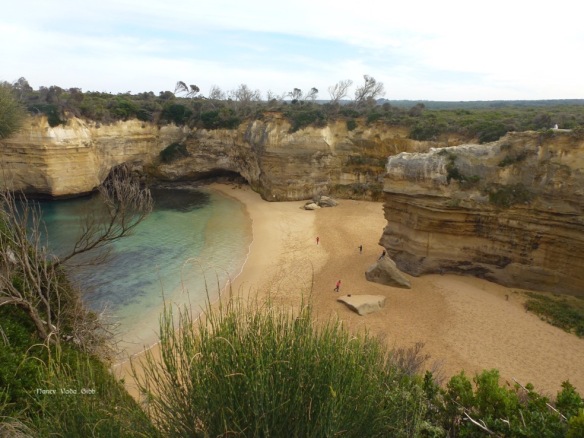 The “Loch Ard” is another sailing boat which features in my Johnston family history.

My Great Uncle George Johnston was a crewman on the “Loch Ard” on one or more earlier voyages. His story is at https://nancyvada.me/sailing/george-johnston-sailor-boy/   He wrote home from London in January 1877, mentioning a walk to the dock with Maggie his cousin and how he secured a fortuitous late berth on the three-masted Loch Ard. He wrote again in November 1877 saying they were in Shanghai en route to Sydney then going on to Twatow and Amoy. He mentioned evading a typhoon:

“I am now in China sound and hearty after a very fine passage of forty six days to the anchorage of Woosong. We had to lie there a week for the high spring tides and have been in Shanghai another week. The other ship I at one time thought of shipping in came up four days ago with her topgallant masts gone. She lost them in a typhoon, one of those fearful blows known only to the China Seas.”

Luckily he did not remain on the Loch Ard much longer, as seven months later she was wrecked on 1st June 1878 on a voyage from London to Melbourne, with the  loss of 52 lives of the 54 passengers and crew aboard. In a later letter George mentioned having “run away” from this ship in Melbourne – more likely he signed off, or he would not have been able to claim sea time towards his mate’s ticket.

But fate dogged him – he was drowned in the shipwreck of the “Cahors” off Evans Head (NSW) in 1885.

We investigated the London Bridge – what an experience for the two people marooned on the new island.

Dave leapt up and down the steps to the Grotto – he’s still half mountain goat of course – I stayed sedately fairly near the top.

Having investigated most of the Apostles area we decided to venture inland to Timboon (lovely name!) where we had lunch at a whisky distillery after sampling several of their rather high priced whiskies. Very nice, but ….. !

Then back towards Princetown via the Cheesery (!?) where a lovely Kiwi lady was overjoyed to meet some fellow Kiwis (apparently I qualify now) and served us some delicious local cheeses.

That evening we thought we might try and catch the apostles in the evening light, and although we were really a little late reaching the area we still managed some stunning shots. 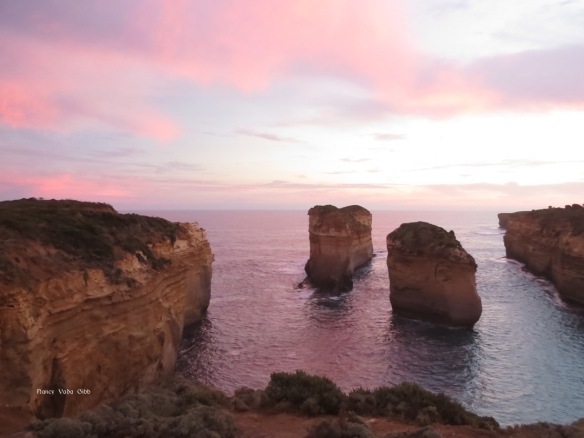 Early next morning we thought we’d try again for those special shots, but apart from us not waking as early as planned, the weather wasn’t really helpful. Rain squalls could be seen in the distance. The sea had got up a little too, which actually made for better shots I thought. 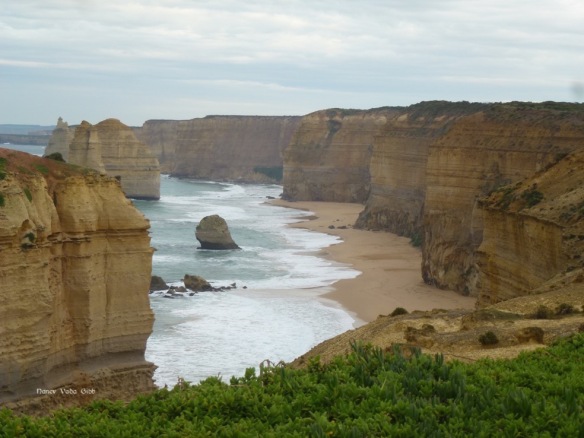 We headed back towards Queenscliff on the Great Ocean Road in constant rain, stopping at Apollo Bay for a rather nice little lunch at a tapas-style bar off the main tourist drag, surprisingly thronged with tourists even at that time of year and in such weather.

Thus fortified we continued but soon decided we’d had enough of the Great Ocean Road in the rain and headed inland – more twisty roads but at least the weather improved a little. We spent that night, the last in Westy, at the Geelong Showgrounds.  It was a funny feeling to cook for the last time with all the cooking implements and crockery and cutlery which we had so painstakingly acquired from a variety of sources just one year ago. Sad too. And to sleep in the bed for the last time.

Next morning we caught the vehicular ferry again and arrived at Mornington in good time. Our friends Jay and Roger have again arranged for us to park Westy in their neighbours’ front yard while we clean her up and get her ready for sale. So there we were settling back in the same place almost exactly one year since we first squeezed Westy in and started to get her ready for our Australian tour.