I forgot to include this photo of the rocks at north Ulladulla in my last blog, such a pretty colour. There was a seafood restaurant and aquarium just above the rocks but it was late afternoon by the time we found this place, and we were due back at Helen and John’s for another feast.

After leaving Merimbula, heading for the south-east coast of Victoria, before we knew it we were through Eden (which we’d visited last year) and at Genoa. Turning left the long winding road took us through bushland to magical Mallacoota, a small holiday and fishing town, with its view of distant Gabo Island. (Yes, you are right, there is a spot on my camera lens which can’t be removed #@$#!!).

I wanted to see Gabo Island again, even if only from a distance. When the good ship  ‘Cornelius’ was circumnavigating Australia in 1980, we were stuck in Wineglass Bay on the Freycinet Peninsula of Tasmania for some days, waiting for a strong northerly wind to abate. We finally left the Bay on a beautiful morning in a reasonable southerly which took us to the middle of Bass Strait and then abandoned us to a very blustery northerly. Huge waves, wind and a general inability to make much headway north meant we could either head for Port Phillip Bay, which we didn’t want (right into Bass Strait in fact) or for Gabo Island just off Cape Howe, which marked the most easterly point of the mainland in that area. The Pilot Book told us to anchor in a specific area but after doing so and finding it far from ideal, we were visited by some fishermen who invited us to join the fishing fleet in another, much more sheltered area. Which we did, with many thanks. I don’t remember now if they kept us supplied with seafood during the 2-3 days we were stuck there, but most probably (!)  SO, Gabo Island is in a way an important, memorable part of my personal history.

I had to content myself with admiring Gabo from a distance; if we’d had more time we might have gone on a boat trip or two…?

The view in all directions from Mallacoota headland was simply splendid. 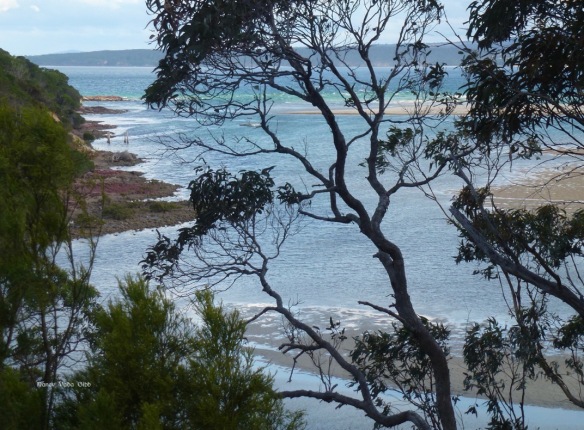 The whole headland overlooking the very narrow boat channel is a huge camping area, with at least 450 camping sites of various sizes all marked with numbered posts. Thankfully at that time of the year, mostly deserted.  We didn’t intend to stay there, but it was still hard to leave such a beautiful peaceful place (although I definitely wouldn’t want to be there at the height of the summer season). 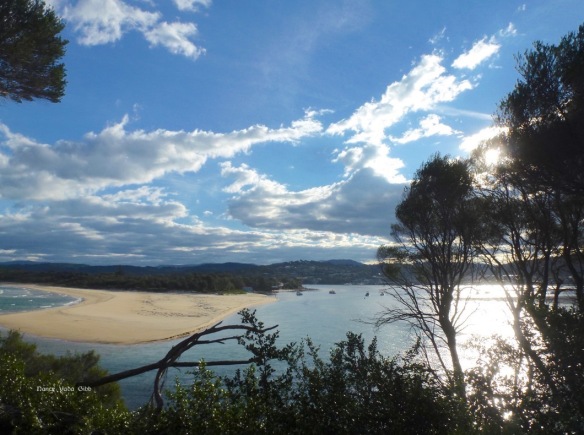 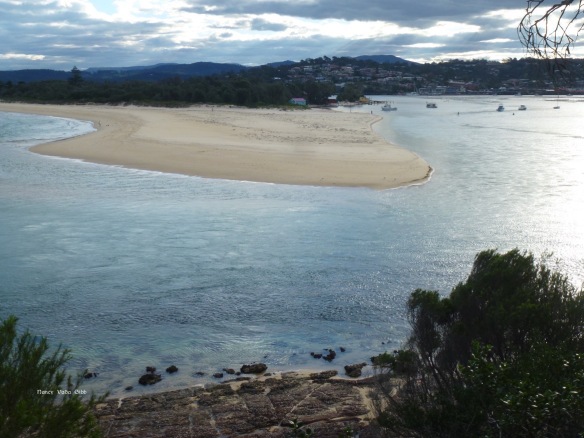 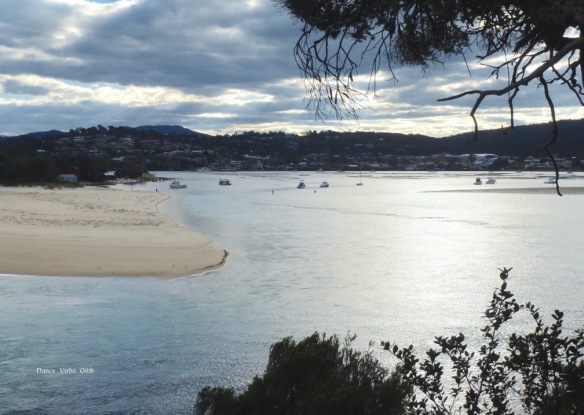 Before leaving Mallacoota we inspected a jetty with its resident pelicans, and had lunch in one of the innumerable cafes. 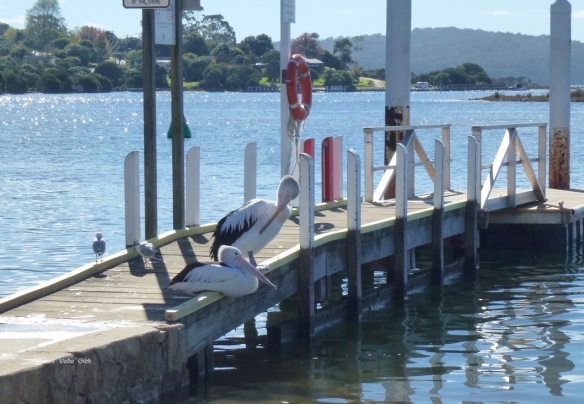 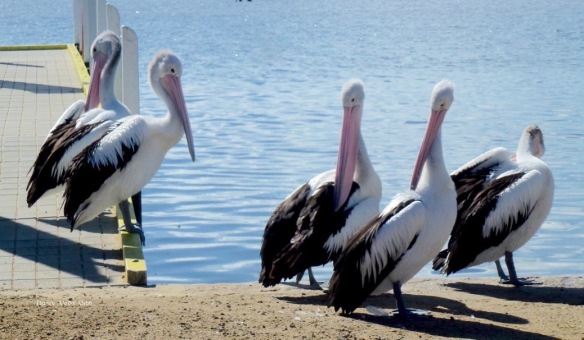 We had no idea what was in store on the road, just that it stayed well inland rather than hugging the coast. Slowly it became clear. Most of the Victorian SE coast is National Park land, and the road winds up and up then down through what must be one of the southernmost parts of the Great Dividing Range, which stretches the length of Australia’s east coast. I started to wonder just how many times we had been up and down that Range. When at Moss Vale/Mittagong alone we must have done it six times! The Range reaches right up into northern Queensland; when we were based at Mareeba we also “did” the Range a number of times including by rail (the Kuranda scenic railway).  Then there was the lovely platypus country west of Mackay ….  and the Blue Mountains ….

That evening, having escaped the Range area, we camped beside the Snowy River between Orbost and Marlo. Another beautiful, peaceful spot. 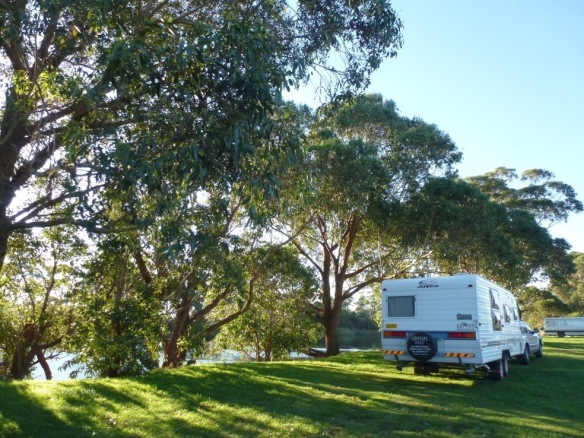 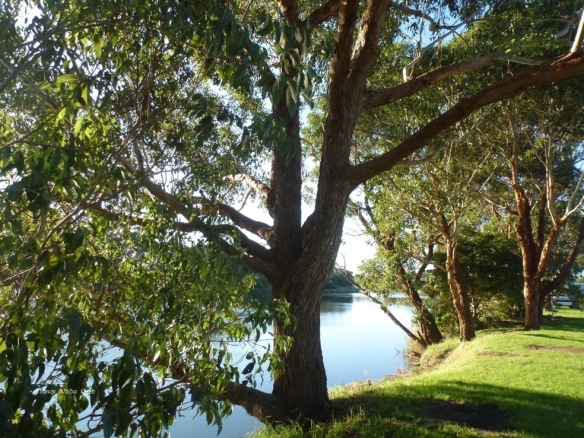 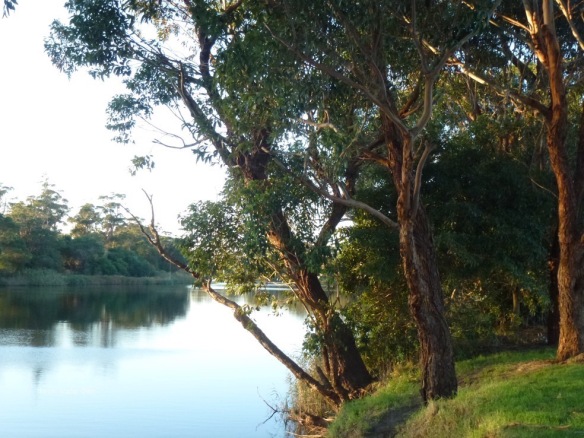 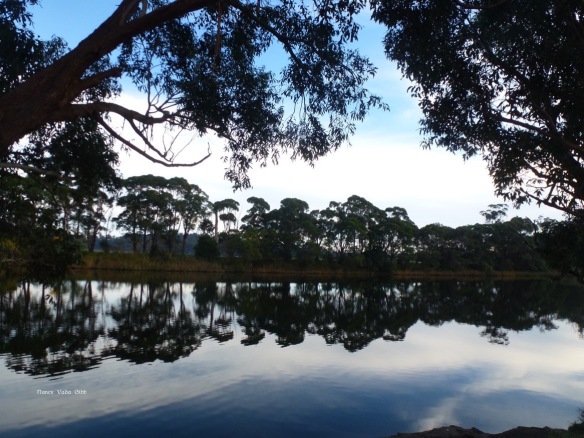