We arrived in the rain and left in the rain but in between there was one half day of brilliant weather – the morning we scattered my brother’s ashes off the breakwater, in company with some of his friends.

We checked out the breakwater the evening before. The local council encourages people to paint the rocks, with the result that many are covered with either remembrance notices, or records of family visits, sometimes over multiple years. The wind blew strongly and only a few surfers were out. 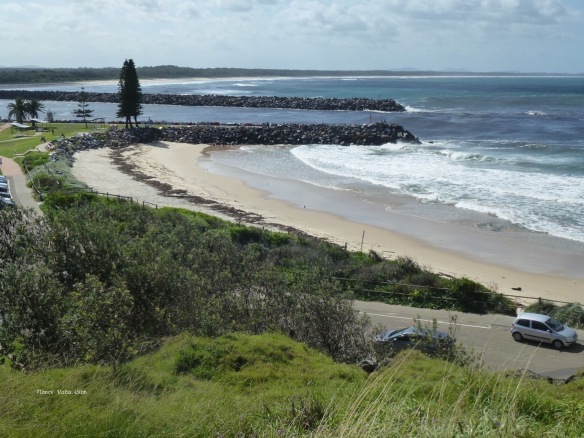 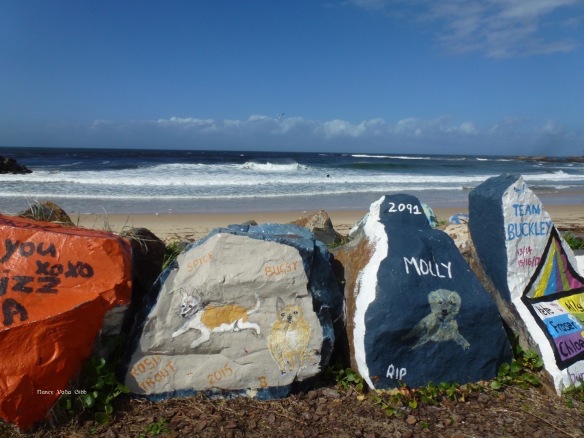 That evening we discovered a super little restaurant right next to the camp. Gleefully I ordered my favourite prawns (in this case panko-crumbed, served on a slate plate with mild wasabi-flavoured mayo) … and then my favourite dessert, affogato. For once it was served correctly (at least according to the Italian lady who first served me affogato, in a tiny northern NZ town of all places) – a scoop of ice cream, a demitasse of strong coffee, and a liqueur. Bliss.

We went back again two days later. This time Dave ordered the prawns and I had something else. Not nearly as memorable. Why is it that the first time you try something new or go somewhere new, the second time is often not as good.

Next morning, after the ashes-scattering, six of us repaired to the local Bowling Club for a few hours.  We chose a quiet table in a far section but before long were surrounded by what seemed like hundreds of bowlers from all over Australia, there for a tournament. Eventually they departed for the links and peace reigned again!! 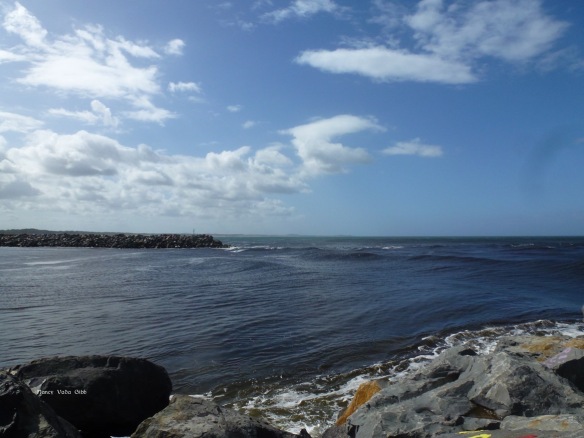 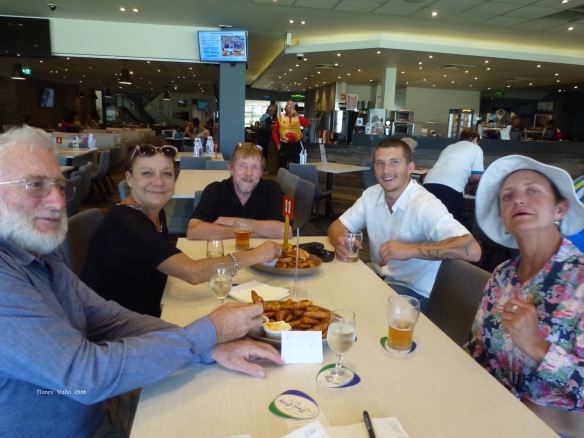 We visited the Port Macquarie Maritime Museum, housed in the old Pilot Station, a little gem with a lovely knowledgeable guide. I think I impressed him by correctly identifying a bo’sun’s whistle which had only recently been put on display and was yet to be labelled. (But when I put this photo on Facebook, immediately several knowledgeable friends piped up … (!)

There were rooms devoted to different aspects of maritime life including local shipwrecks (many!) and decorated with signal flags …..

… the usual early artefacts – Matthew Flinders called in here of course (no, not the museum) … 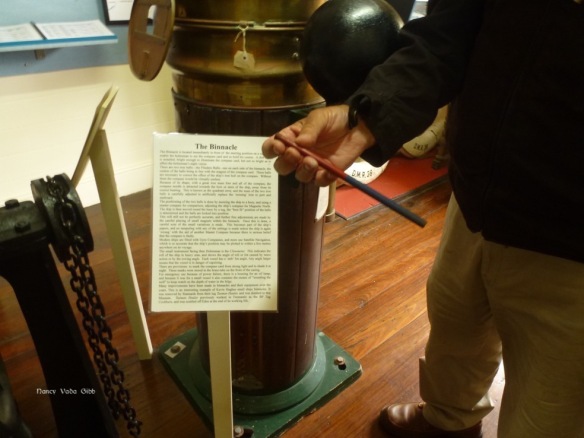 … photo of a railways ferry …. 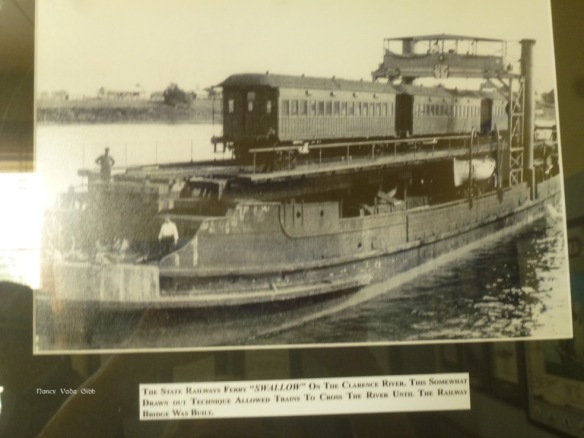 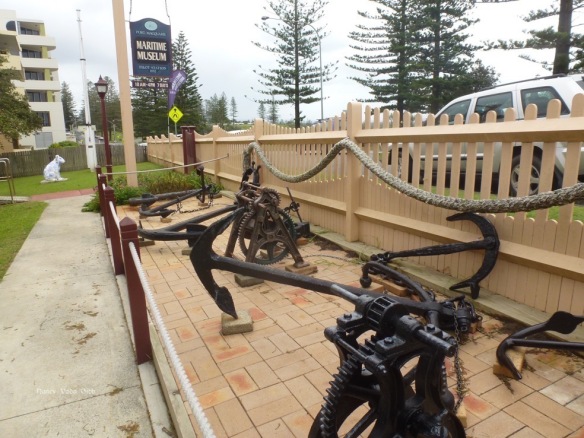 and some wonderful models of old sailing ships.

A box sextant excited my curiosity, it’s very different to an ordinary sextant. 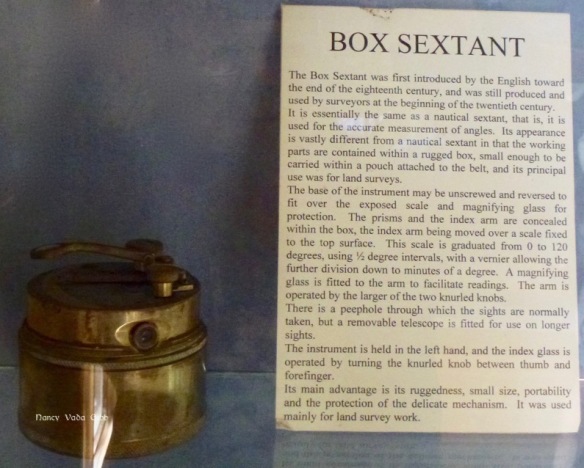 Port Macquarie does not have a big banana, big tomato, big salmon etc – it has big koalas. Not that big but certainly more than double life size, all the same basic model but painted in all sorts of different themes. These are three of the more intricate, the last one in the grounds of the old Court House; we didn’t manage to see them all. Some were merely in football club colours, McDonald’s, etc. I think there are 33 in all. 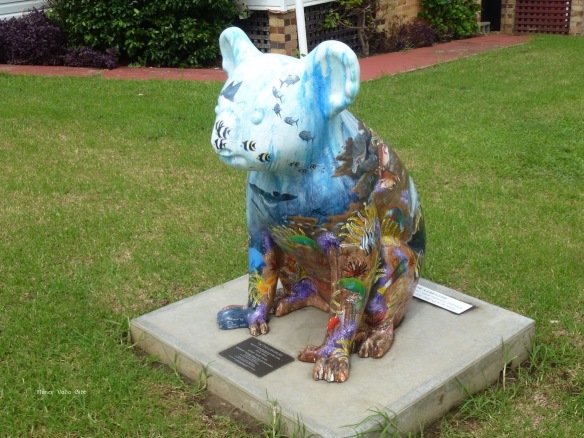 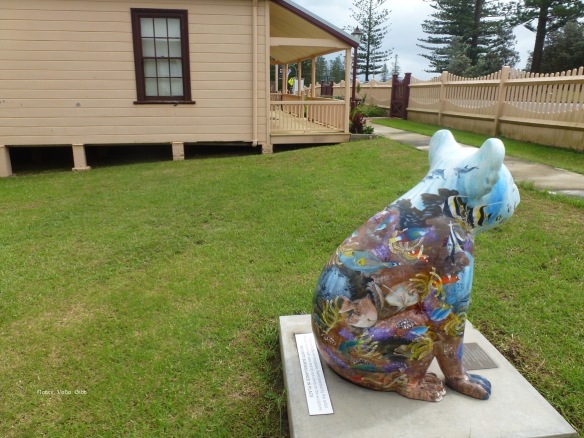 It was blowing hard again when we drove past Nobby’s Head but then stopped at Flynn’s Beach …. 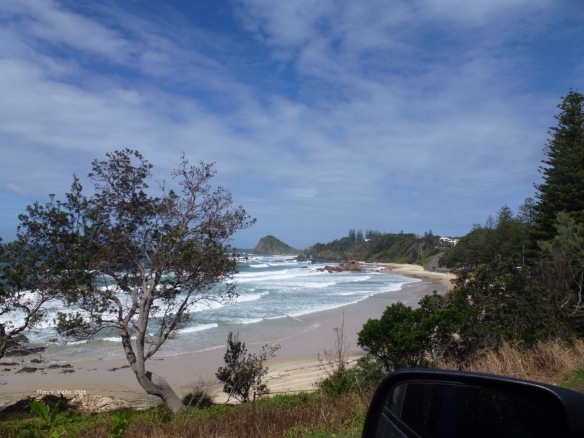 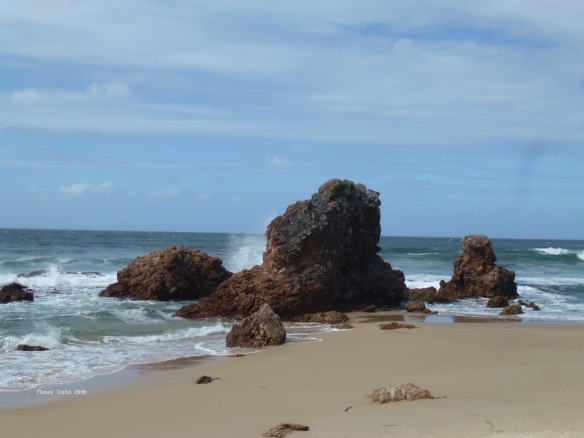 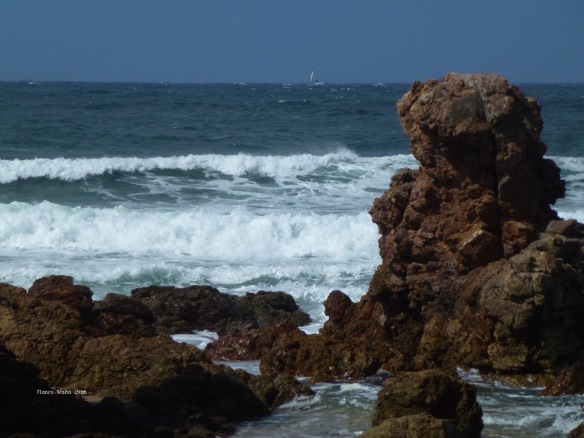 ….. and then visited Tacking Point, named by Matthew Flinders in 1802. The lighthouse remains but not the lighthouse keeper’s cottage. 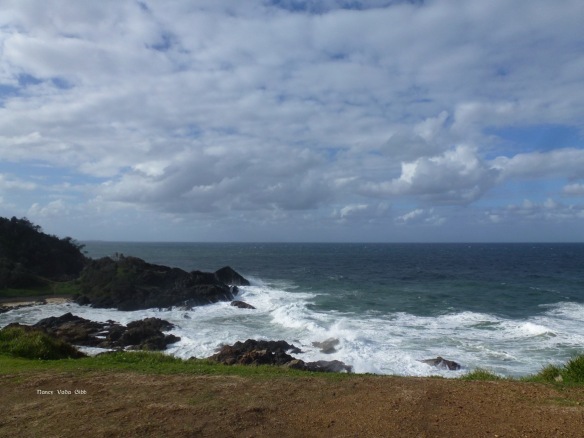 There were wonderful views south along Lighthouse Beach. 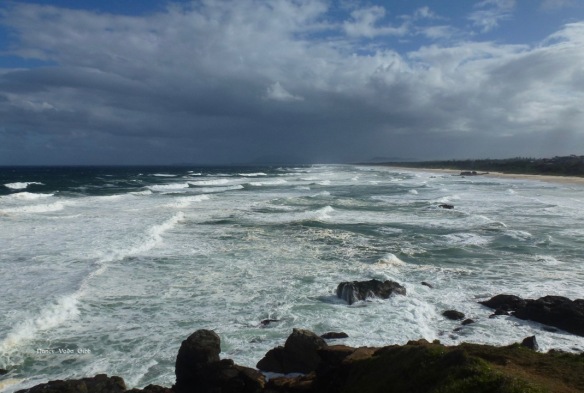 A sign told of numerous wrecks in the vicinity. “Many fatal shipwrecks have been recorded along the northern NSW coast since records began before 1800, and more than 25 of those are off the coast of Port Macquarie alone. ….  Following outcry a the appalling loss of life at seas, the NSW Marine Board issued a directive to “… illuminate the coastline like a street with lamps”.”

Before leaving Port Macquarie we made a last trip to the breakwater. This time the sea was quieter and the clouds were clearing.  Also to Flynn’s Beach, this time it was  low tide. 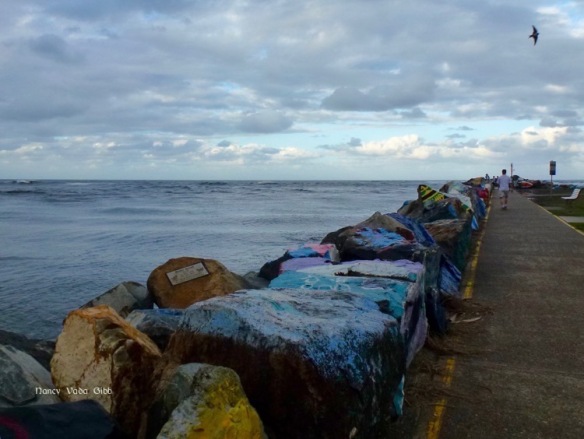 We had several chats with my brother’s friends including his legal Guardian who was appointed five years ago, and as a result I have been able to piece together a few more parts of my brother’s life. We were very different people and did not see each other for long stretches, particularly as we lived far apart. I was glad I was able to see him last year when we dashed over to the coast from Broken Hill before heading north for the Queensland outback.