We arrived back to a wet and windy Christchurch on the usual midnight express. Despite the announcement soon after take-off that we might be in for a bumpy ride, the bumps did not eventuate, and the journey was further enlivened for Dave by finding he was sitting right next to his old Christchurch doctor (and the husband of mine).

Next morning it was straight to Swannanoa, where our friends’ driveway welcomed us with a brilliant display of old apple trees (the property used to be an apple orchard).

Both T5 and the red truck had survived the winter very well despite not being under cover. T5 was dry and smelled fine, perhaps due to the three containers of dessicant we left inside plus a liberal distribution of dry tea bags. One bag tucked inside some clothes had burst which gave me a bad moment till I realised what all the little black things were! But the clothes smelled fine, unlike the towels which had been in another cupboard without any tea bags and simply smelled of disuse.

The truck had become home to a starling family who somehow constructed a nest in the engine bay. Our friends discovered it about a week before our arrival when they opened the bonnet to check the battery. They removed as much of the straw as they could but by the time we arrived the nest had been rebuilt. Luckily there were no eggs. 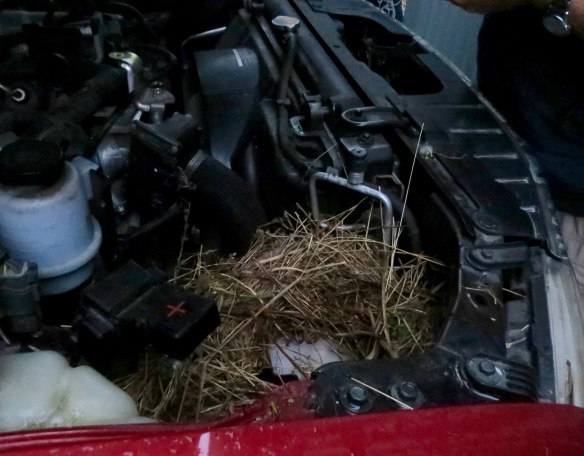 Within two hours of regaining our ‘home’ we were on the road. We headed straight for the chestnut orchard, still looking very wintry with mostly bare-branched trees; at this time last year, according to a reminder from Facebook, it was a sea of green branches, not just green grass and flowers. This time at least there’s a pukeko’s nest in the long grass and some quails skittering about. 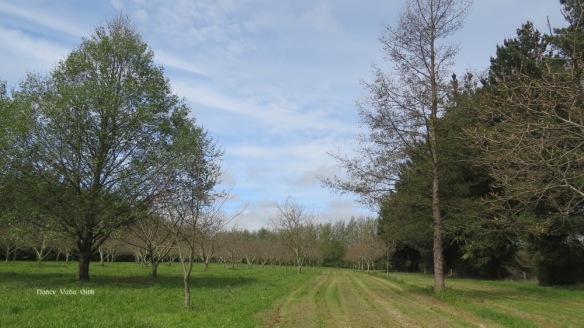 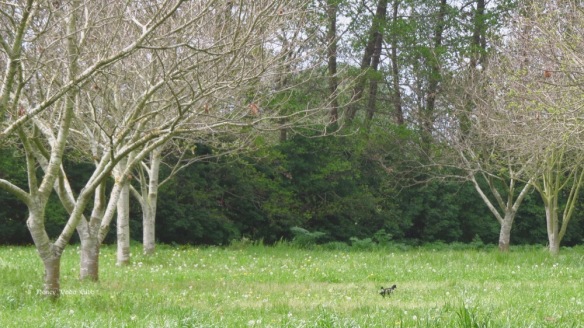 After stocking the pantry, collecting Penny the foxy was our next focus. Penny’s foster dad David J was happy to make the trip from Taumarunui to Wellington so he could spend time with his granddaughter there. (We received a text message the day before we arrived: “Penny wants to know why I would rather have a baby on my knee instead of her?”) We headed for Blenheim with T5 in tow, planning to take a day ferry over to Wellington with just the truck (so Penny could travel back on the ferry in the truck and not in a cage beside lots of strange dogs).

After outback Australia and in particular the very dry country around Nic and Mick’s in the Somerset area north of Brisbane, the green Canterbury plains dotted with lambs, flowering trees all along the highway, occasional foals (including one particularly striking ‘paint’ foal which eluded my camera), snow-clad distant mountains and in particular the surprisingly green hills of the Kaikoura Ranges were a welcome revelation. We were back home!  Even if it was a grey rainy day …. 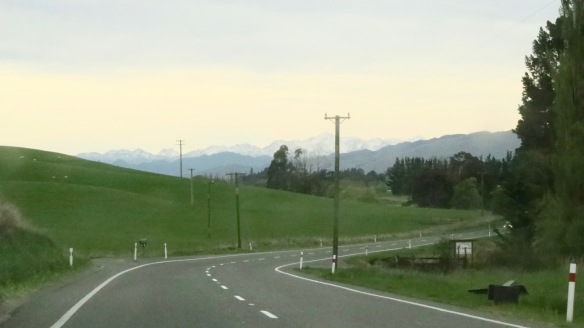 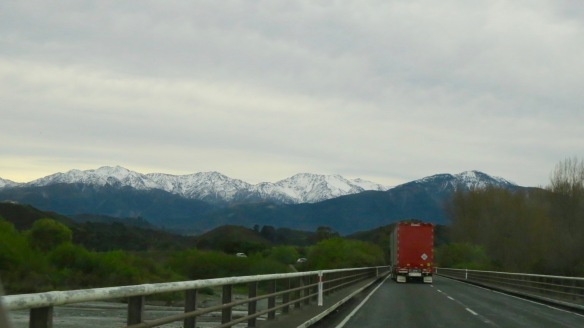 One sobering moment was on the Ranges when we came upon a huge semitrailer laden with cars which somehow overturned after negotiating a particularly tricky curve.

We stopped at Domett for the usual delicious lunch…..

…. and also visited the seal pups north of Kaikoura but it was too early in the (new) season for them and only a few older pups were around.

Arriving in Blenheim we made the snap decision to try a new POP site near Picton, which turned out to be a rather nice huge green paddock.

We were at the ferry terminal by 8 am next morning, this time doing the crossing on the newer Interislander “Kaiarahi” which has very comfy reclining chairs in the huge viewing lounge with large windows on three sides (why didn’t I take a photo?).

Once off the ferry, a quick trip to Animates to get Penny some treats, and we were at David J’s son’s place in seemingly minutes. Penny shot out as soon as the door was opened, did a double-take and instead of her usual who-are-you bark, immediately started dancing and climbing over Dave, then me, then Dave, then me …. definitely she knew who we were after 6 months. A lovely reunion. Our very grateful thanks to David and Marion for looking after her so well. I’m sure if Penny could talk she would have some wonderful tales to tell, of rat hunting on the woodpile and visits to the neighbour (and his fire) whenever left at home alone, and helping in the woolshed, and … and …

here’s the photo David J took of us as we were leaving. Obviously taken in Wellington …!!

The trip back to Picton was without incident, although we were expecting a very rough trip judging from the wind and waves in the Wellington inner harbour. 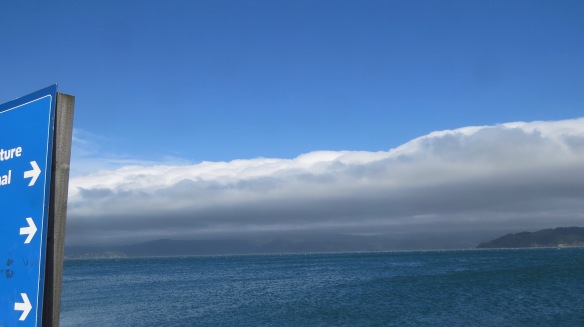 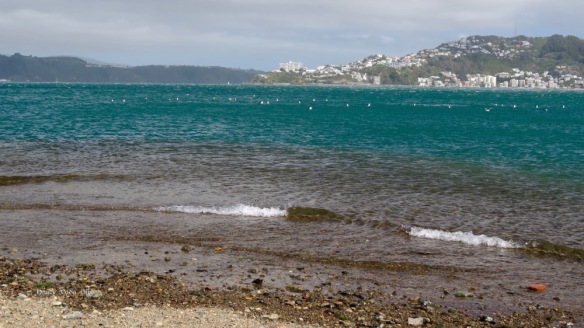 But it was a smooth journey, with a beautiful sunset as we entered the Marlborough Sounds. An outgoing ferry was lit by golden light but by the time Dave had grabbed his camera and scooted outside the light had gone. 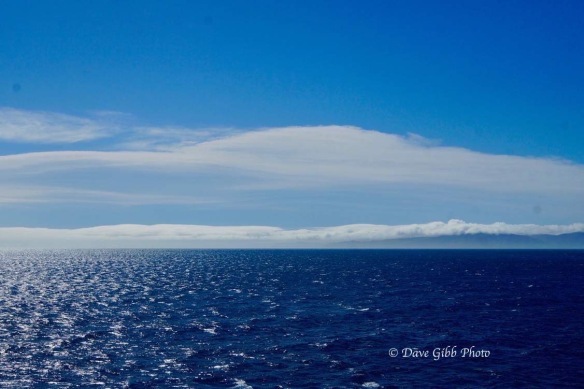 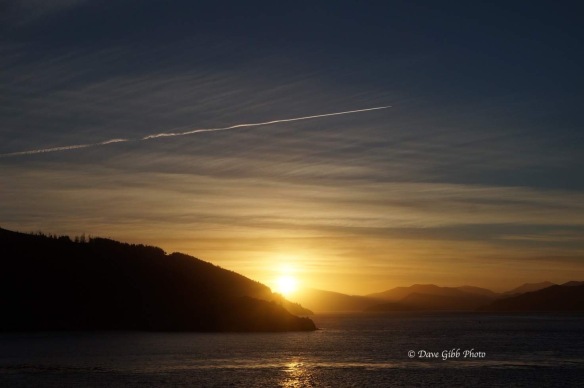 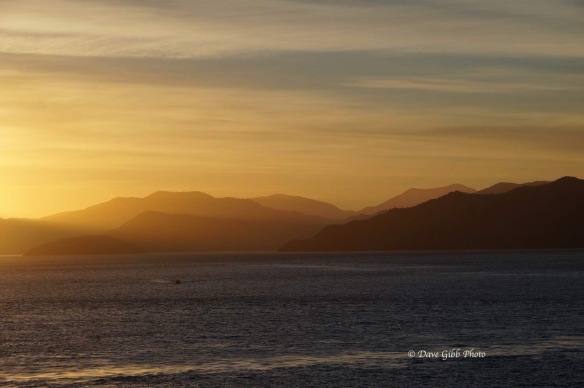 Penny seems happy to be back in T5 but I do think she misses the large warm farmhouse kitchen at Taumarunui, not to mention expert ball-thrower David.

It rained again most of the way back to Christchurch. We stopped at Nin’s Bin for some mussels and crayfish but the hefty price tag for a tiny little cray hardly big enough for the two of us and the lack of mussels due to the bad weather spelled disappointment. 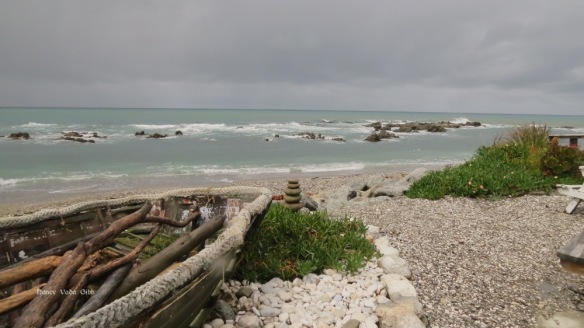 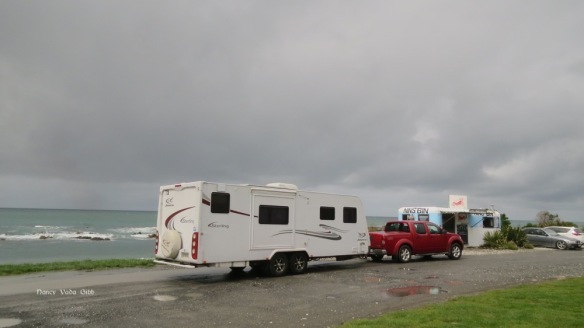 So here we are back in Christchurch, waiting till the long weekend is over and we can get our special caravan TV re-tuned to the Geosynchronous orbiting satellite. Apparently the satellite’s position has been changed and the TV/Caravan repair places have been inundated with irate people.

“A geosynchronous satellite is a satellite in geosynchronous orbit, with an orbital period the same as the Earth’s rotation period. Such a satellite returns to the same position in the sky after each sidereal day, and over the course of a day traces out a path in the sky that is typically some form of analemma.”  ……  These satellites are commonly used for communication purposes such as radio or television networks, back-haul and direct broadcast.  There are also some weather satellites and classified military satellites. GPS systems do not use this type of satellite.

Is it really Spring?? I keep on thinking it is time to get out more warm clothes ….

Postscript: Six months living in another caravan with a different layout has consequences. Too often one of us says – Where is X? and the answer is – I know exactly where it is … in (this cupboard or that) … in the Australian caravan!