We did not stay overnight in Wilcannia but continued on to Broken Hill, arriving just at dusk. We’ve been strongly advised by many people to be off the road well before then as the kangaroos start to come out in force, and we are yet to acquire a bull-bar for Grandy. indeed, when we were at Euabalong and went to Condobolin for the day in Jim’s car, driving back in the evening we saw quite a few kangaroos.

The road to Broken Hill may have been long but the scenery changed every now and then. There had been reasonable rain and everywhere the road verges were bright green, particularly noticeable against the red earth. Some areas were bushland, some scrub, others mainly saltbush. We saw a few emus, some dead kangaroos and a fox making off with some roadkill ……

….. but by far the largest number of livestock were feral goats. Small multicoloured mobs were everywhere. I wish I’d had my camera ready, particularly for the black billygoat outlined against the sky. 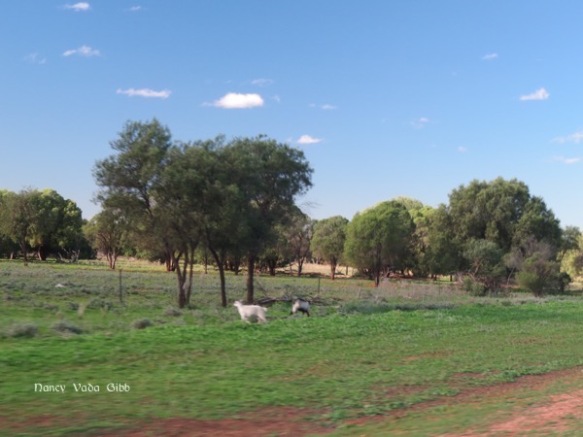 An interesting cloud formation lured us on. 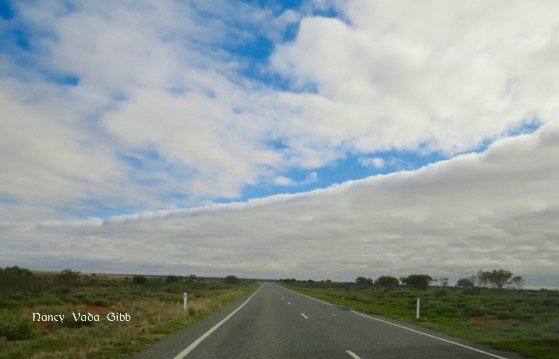 The caravan camp at Broken Hill, just inside the city boundary, was very clean and well organised. There were not nearly as many caravans there as at Cobar. The weather was initially so good that Dave decided to try and put up our huge awning for the first time! 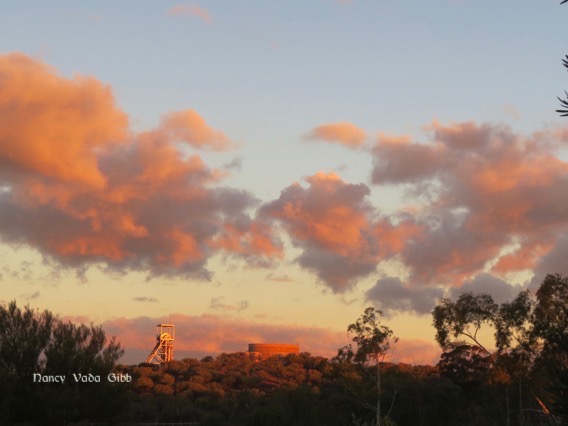 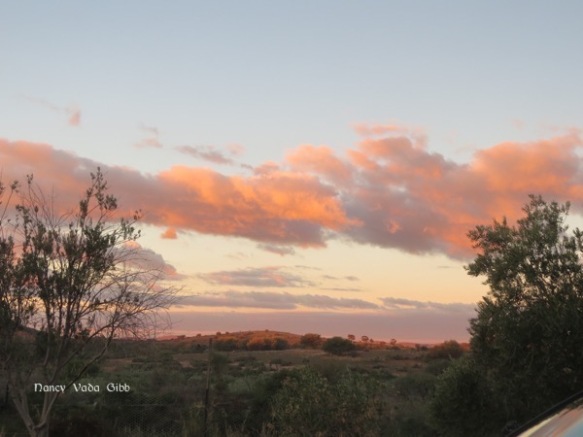 Broken Hill itself I found a little curious, it has many lovely old buildings but it is also most definitely a mining town rather than a typical country town. It is dominated by a huge slag heap near the railway, and has a curious mix of old miner’s cottages (some in original condition, some “modernised”) side by side with far larger and more modern homes. Very few if any had flowers in their front gardens although most had a shrub or two. 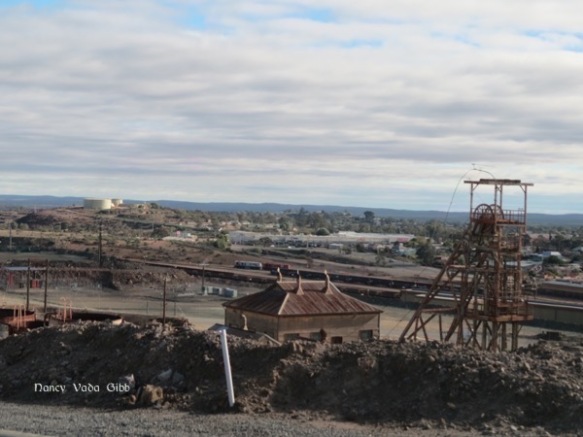 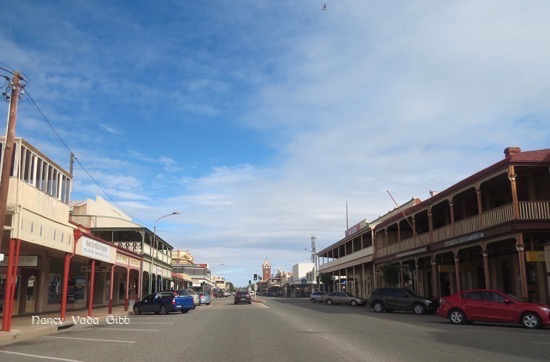 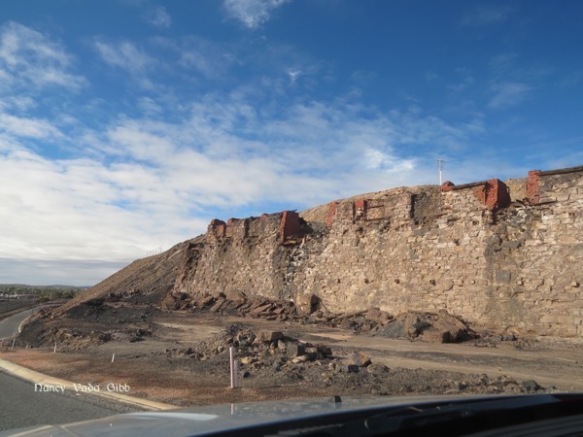 I had a date with the librarian at the Family History centre, but it was Sunday, so to curb my impatience we visited a museum or two. The Railway museum was fascinating, particularly for Dave – so many old trains to clamber over and around and through! The pressed metal ceiling in the entrance was a work of art. 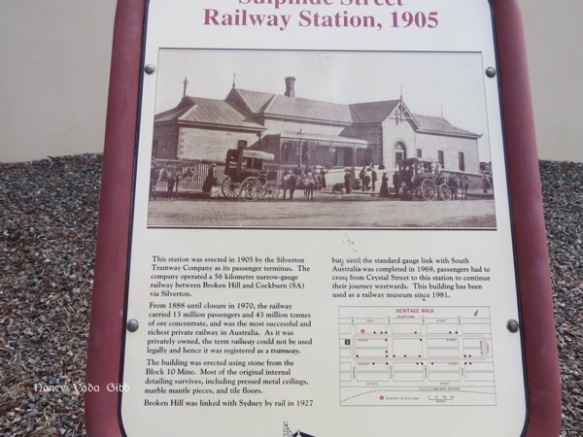 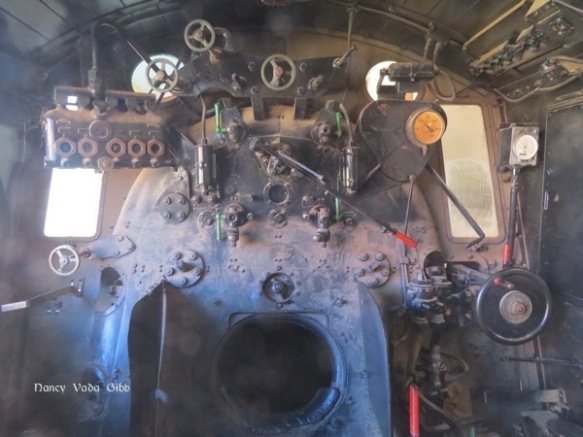 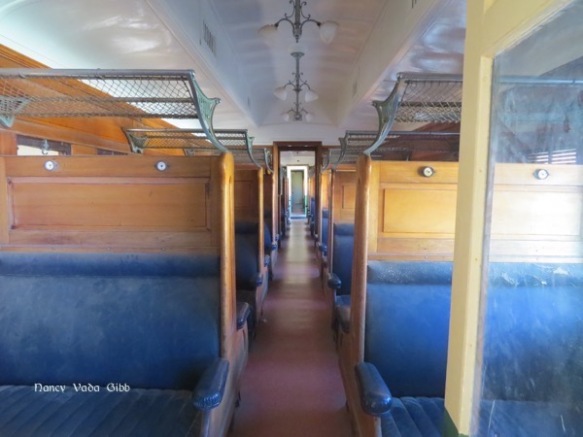 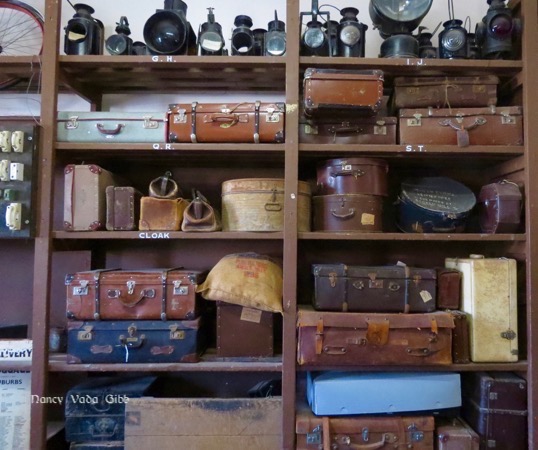 A newish section was devoted to the many immigrants who arrived following WW2. Many personal stories were told. It was a moving display. Here’s just one of many panels each covering a different aspect.

Next door was room devoted to old transport – buggies, a stretcher for transporting people who had to be turned frequently, etc ……..

…… and on the wall a huge old map …. and there was “Cuthowarra”, near another old Darchy property “Yarrawirra”, and well to the north of the Broken Hill-Wilcannia road.

Here’s a navigation map for the Darling, hand-drawn on linen;  it scrolled up and down.

So meeting the Librarian next day was a bit of an anticlimax, but she did have another very clear map for me, and some information she’d gleaned from the slightly infamous “Ancestry” website, infamous because too often in the past people submitted incorrect information and it is all still there. I will have to contact them and try to correct it – AGAIN!!  I

(I know who put the incorrect information in – an extremely distant cousin who thought the way to build a family tree was to grab any likely tree (same surname etc) and just mis them all together and hope some matches resulted….. This person also entered incorrect information about one of my families so that a great grandmother is now “married” to her grandson!!)

It was mostly cold and dismal while we were in Broken Hill, but a visit to the Pro Hart gallery soon changed that – a lovely explosion of colour on a cold dull day. There are also some of his sculptures on a vacant allotment just across the road.  (i could not take photos inside the gallery). 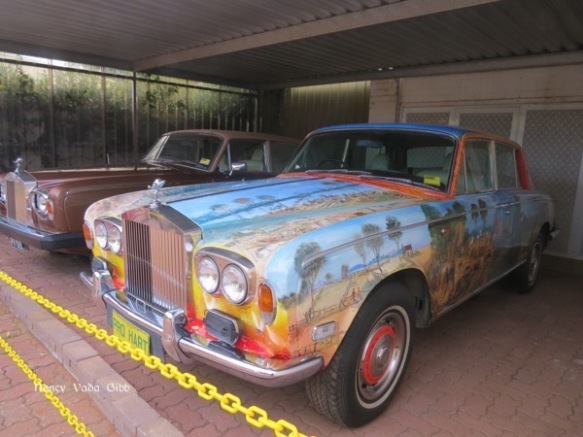 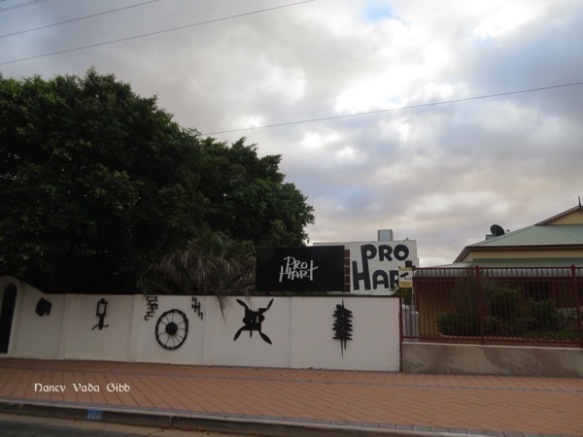 We made a day trip to Silverton, a blog in itself.