We seem to have seen a great deal of Victoria in the past week! Our search for a motorhome or bus has taken us up to the border at Wodonga, then to Echuca, and as I  write this we are back at Moonambel with another drive to Melbourne set for tomorrow.

We were accompanied to Wodonga by Joan’s friend Peter (he’s actually the husband of a friend of Joan’s daughter, if I have it right….) and went for a test drive in a Hino Rainbow which had been beautifully fitted out …. but while the interior vastly appealed to me, the gearbox and general mechanical condition did not to Dave, and as it was also too big for me to drive on an ordinary car license, it was regretfully struck off the list. Particularly regretful as it towed a little Suzuki, which appealed as it would mean we could leave the bus in a camping area and scoot around to do shopping etc.  We returned to Peter’s home some 2 hrs drive away where we had some wonderful conversations and were invited to stay the night. Many thanks, Sharon and Peter.

Next morning we were off again on the hunt for yet another bus, this time in Echuca further up the Murray River. I was happy as I have long wanted to visit the river, not only because I have never seen it or or the famed paddlewheel steamers (an essential item on any Australian’s wish list) but also because the river is involved in the early history of my d’Archy family.

In fact I have decided to start an occasional extra blog to cover all the places associated with the d’Archy family in the early days of Australia’s colonial history. 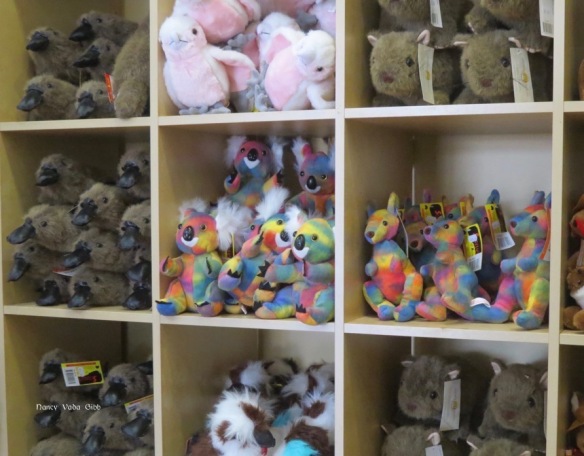 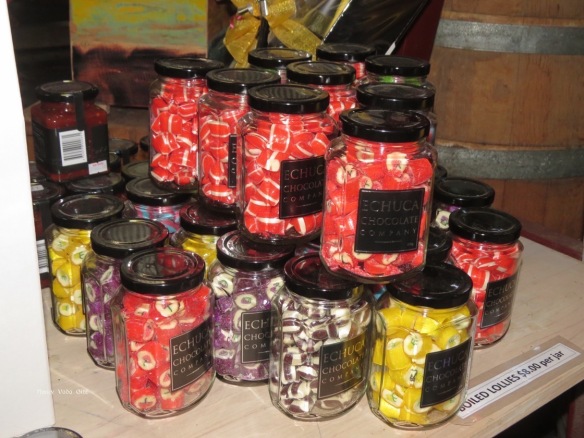 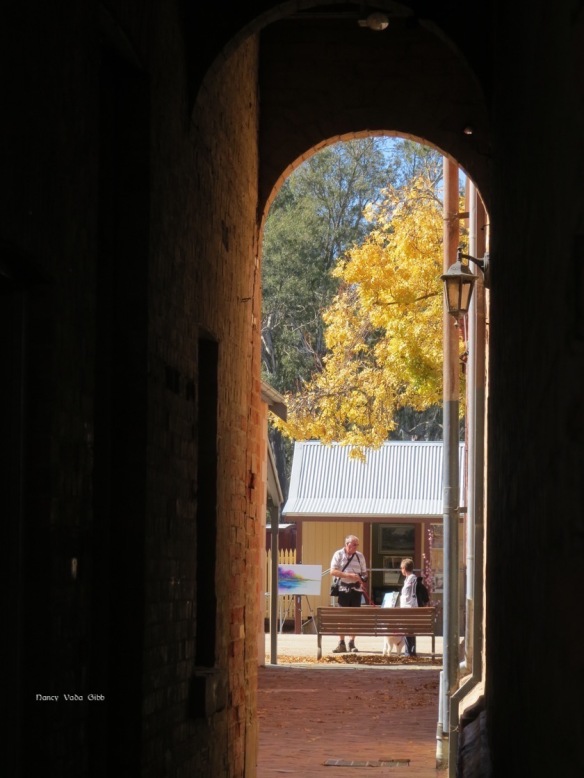 We had Devonshire Tea in an olde world house – but the scones were not up to Dave’s mother’s standards (nor mine either). Still, a pretty setting.

We enjoyed Echuca. As the owner of the bus we had come to see would not be in town till the next day, we booked into a motel. I made a mistake when using Trivago and set the wrong parameters so that what appeared to be one of the best deals in town was actually far from it!

With time to spare we went on an afternoon cruise up the river on the wood-fired “Pevensey” which was originally built in 1911, rebuilt several times, and once carried 2000 bales of wool. 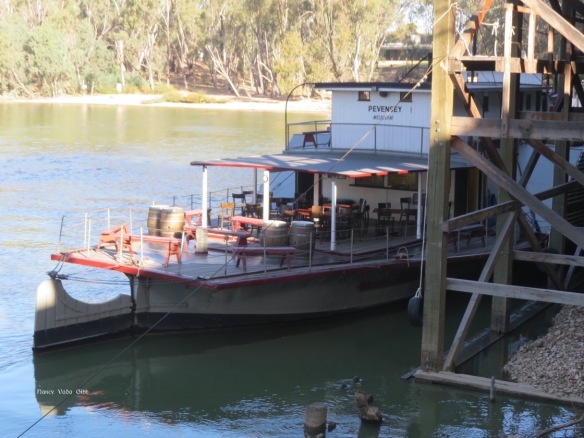 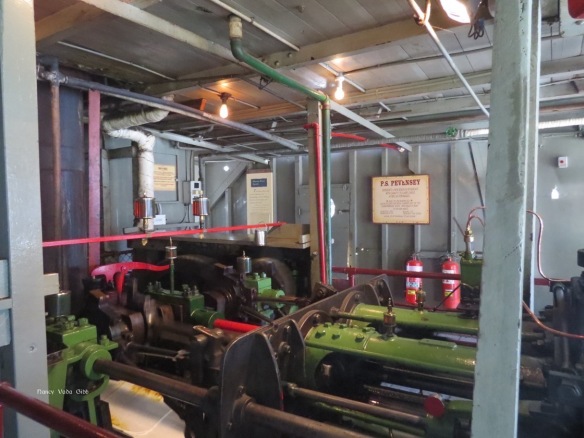 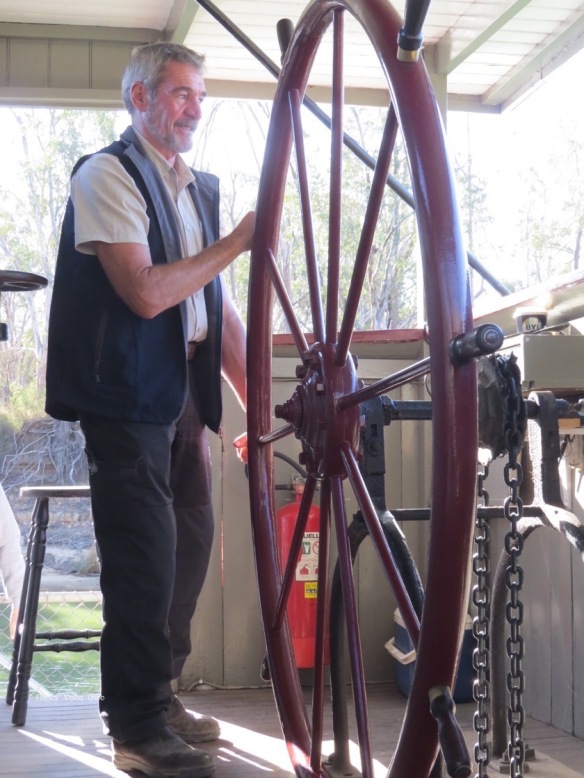 ‘Course i had to have a go … that wheel was certainly heavy. 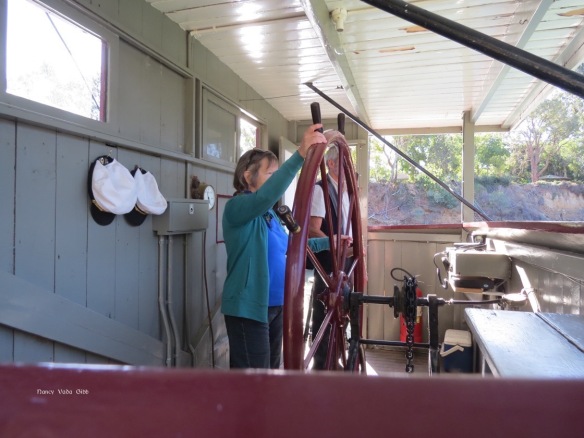 I wonder if some of that wool came from d’Archy properties, including the main one near Hay and several upriver at Wentworth, Pooncarrie and even further up the Darling at Wilcannia. Did one or more of my ancestors actually ride the “Pevensey” or one of the other old paddle wheelers? There was certainly quite a collection at Echuca. 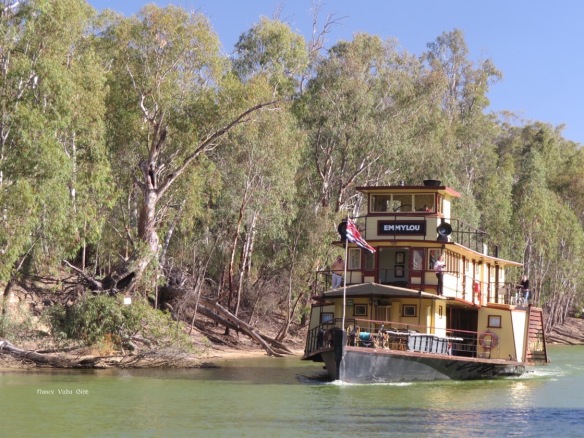 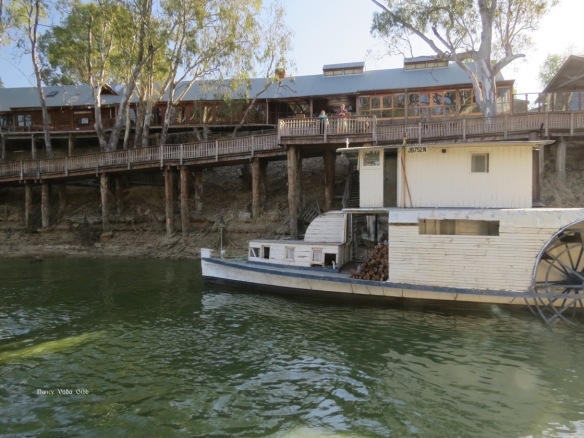 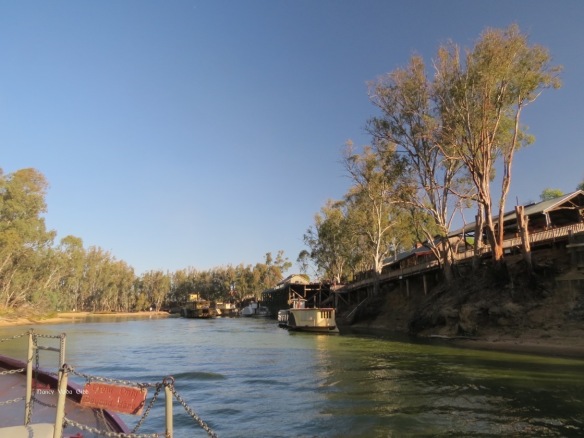 The river is obviously a shadow of its former self. The steep banks and many fallen trees (‘snags’) attest to past strong flows. Wikipedia tells me it is Australia’s longest river at 2,508 kilometres (1,558 miles), and as of 2010 the river system only receives 58% of its natural flow, being perhaps Australia’s most important irrigated region. 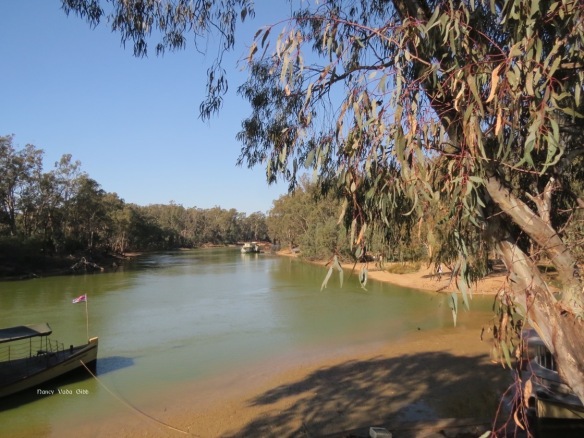 “The health of the Murray River has declined significantly since European settlement, particularly due to river regulation, and much of its aquatic life including native fish are now declining, rare or endangered. Recent extreme droughts (2000–07) have put significant stress on river red gum forests, with mounting concern over their long-term survival.”

“The first Europeans to encounter the (Murray) river were Hamilton Hume and William Hovell, who crossed the river where Albury now stands in 1824 ..…”

The significance of this to me is that my ancestor Thomas Darchy was said to have worked for Hamilton Hume before marrying and settling somewhere near the Lachlan-Murrumbidgee junction in about 1844. It was claimed that Thomas and Susan’s daughter Clara Maria was the first white child on the Lower Murrumbidgee.

The river itself its still flowing but is a murky green from toxic algae, so i wonder what all the houseboat owners and renters do now that swimming is not possible.  There were so many houseboats! Mostly propelled by outboard engines, they ranged in size from quite small up to luxurious double-deckers. 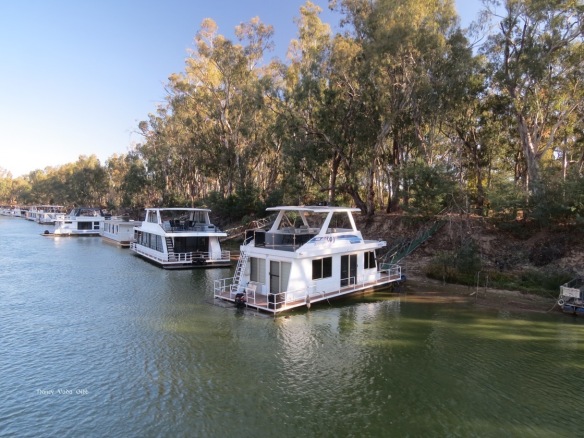 Our exploration of the Echuca area continued next day …..