Finally we were off again, heading for Blenheim and another homesit for Robyn and her adorable little cat Kassia. We were delighted to find the Domett Station cafe open, it has been closed the last two times we’ve been past and we feared permanent closure, but the same wonderful chef is still there. Note to self: do not travel that way on Tuesdays, it’s not open that day!

We also spotted the latest colour/flavour in marshmallows for baby dinosaurs – black. Liquorice or squid ink? Who knows?! Dave did start to question the unwrapped bales of hay that we saw occasionally – what are THEY in grandchild-speak?

We settled in at a POP in outer Blenheim, next to friends Graeme and Barb who were the reason we’d left Christchurch earlier than planned. Dave went on a bike ride or two with them.

On Sunday we all enjoyed a delicious salmon salad at the Hunter Winery Garden Restaurant, the first winery restaurant in Marlborough (1984). Hunter’s Wines in Marlborough is one of the pioneers of the Marlborough wine industry. Established over 30 years ago. Jane Hunter is the most acclaimed and awarded woman in NZ’s wine industry, with an impressive set of accolades. 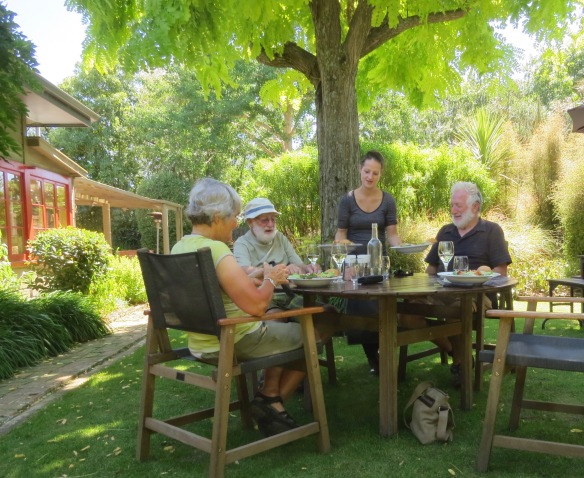 Car parking is under some elevated vines, probably remnants of an  early vineyard before growing methods changed. The huge grape clusters were just starting to go through veraison (changing colour). According to Wikipedia, “As the grapes ripen, the concentration of phenolic compounds like anthocyanins replaces the green color of chlorophyll in the grape berries…. during veraison which may last from 30–70 days depending on the climate and other factors, the grapes go through several changes which impact their sugar, acid, tannin and mineral composition.” 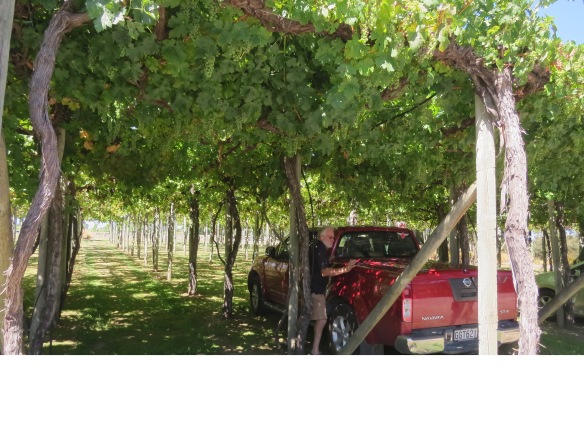 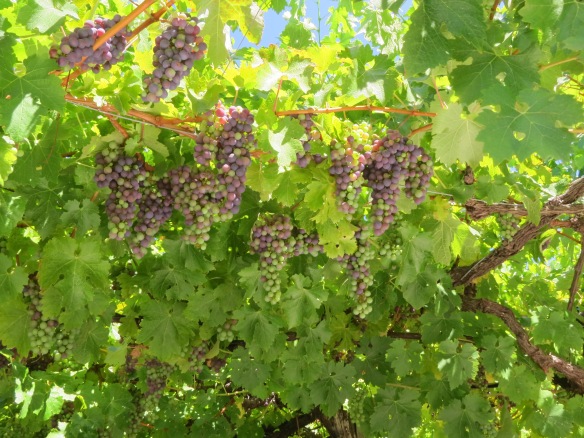 Later when I took Penny for a walk along the road near where we are camped, right next to one of the St. Clair vineyards, the same abundance was visible but the grapes there were all still green. 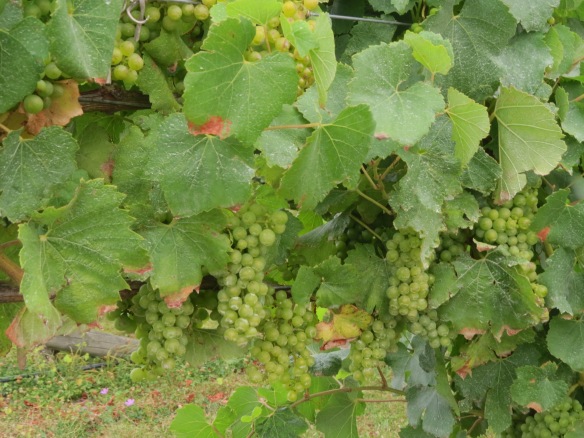 Opposite St Clair vineyard is a memorial commemorating the first crossing by air of the Cook Strait, in 1920.

While at the Hunter Winery we were admiring the work of the artist in residence, Clarry Neame, when we learned there’d been another big quake in Christchurch – 5.7. I hope it does not mean we will have to get our house checked again before the renters move in.

On the way home Dave surprised me by saying we might as well pop into the chocolate factory on the way ….. enough said!!

This POP is popular …. here is one of the long-term residents, “Old ‘n Dazed”. Someone lives in it but it hasn’t been on the road for some time. T5 is in the distance. Although lots of caravans and motorhomes have rather twee names, occasionally a clever one is spotted. I always forget to note it down though!

We shift to Robyn’s driveway tomorrow and start ten days of  home sitting.