No this is not about the musical. According to Dave I am now a “Crazy Cat Lady Wannabee”.

Recently we visited our two beloved Burmese cats at their foster home in Christchurch where they have spent the last two years having a lovely time with a family of four. Oscar and Georgie remembered us, it was obvious – our wonderful cats. They are now nine years old. Which has started a bout of reminiscencing. 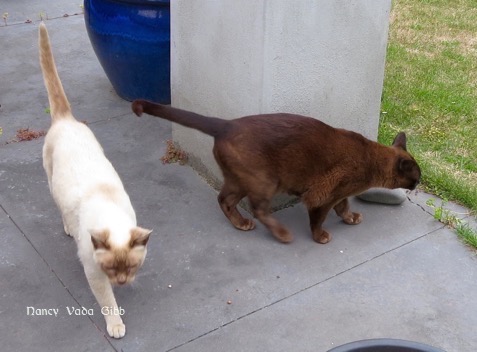 Since I first arrived in NZ in 2000 we have owned a succession of Burmese or part-Burmese cats – first Saba (who did not know how to climb trees and came from the Cat Protection Society), then Aza (a gorgeous blue with amazing golden eyes) and then Rex (a very cute little cat with one bad habit, he sucked on everything in sight particularly a visitor’s new possum-wool socks and scarf). The latter two were good friends so when Aza had to be put down with spinal cancer at a young age, Rex went looking everywhere for his mate including the road outside where he never normally ventured, and was struck down by a car. it was devastating losing two cats within a few days, but before too long we were looking for some Burmese kittens.

We heard of a litter of six with just one seal coloured male (which we both wanted); they were far too young to leave their mother so for the next four weeks or so we visited them weekly at the breeder’s, rather like new parents visiting their premature babies in hospital. The little seal boy, less adventurous and more timid than his sisters, was named Oscar and his pretty cream sister was originally going to be called Lucinda, after the title of Peter Carey’s book, but her official pedigree name of Georgie Girl seemed to suit her far better. Officially Georgie was a lilac burmese but as she aged it became obvious she was a ‘chocolate’. (Unfortunately all the photos I would love to post here are in storage). 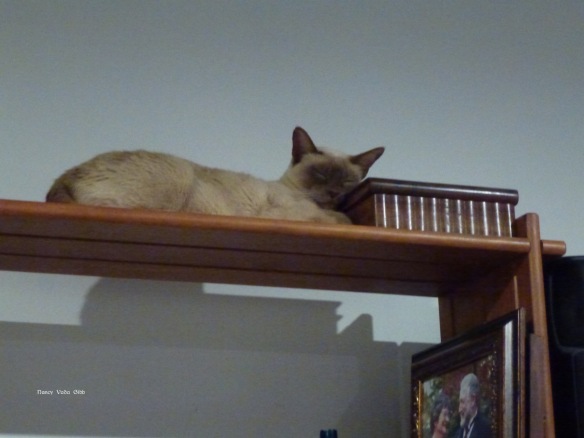 Oscar has always been the more cautious, thoughtful one and Georgie the rush-in-and-find-out-later one.

Georgie got on particularly well with the fox terrier puppy we obtained about three years later; Oscar was always more stand-offish. All three used to curl up together in one basket (ditto re photos – this is frustrating!). When Penny injured a leg and had to wear a ‘collar’ for a while, Georgie kept her company. 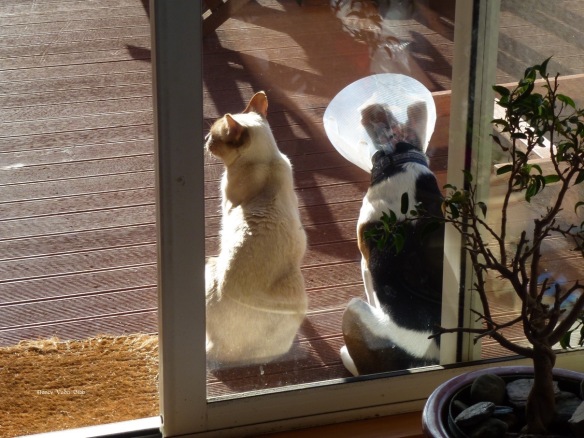 Until we started our travels, Georgie and Penny often played chasing throughout the house. Sometimes Penny became rather too exuberant but Georgie never retaliated. If Penny tried to play with Oscar he would just give her a swipe (claws in) and that was that. 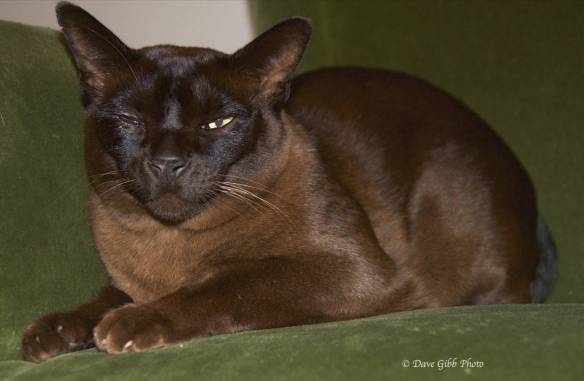 Oscar loved to explore, which was his undoing. when he was a few years old a neighbouring dog grabbed hold of one leg as he was making his getaway over a fence, or so we surmise. Surgery for a dislocated hip plus “bed rest’ in a cage for weeks was his lot. We put the large cage onto a wheeled table so he could sleep in our bedroom and supervise me cooking in the kitchen and watch TV with us in the evenings in the warm living room.

He recovered rapidly but within six months was back in the cage this time with the head of the femur broken off completely. Patched up again by the wonderful Steve at Aldwin’s Rd. Vets, after the obligatory cage incarceration he was soon resuming his former life, jumping fences and all. Today he only has the barest limp if at all. Yet he has no hip joint on one side! 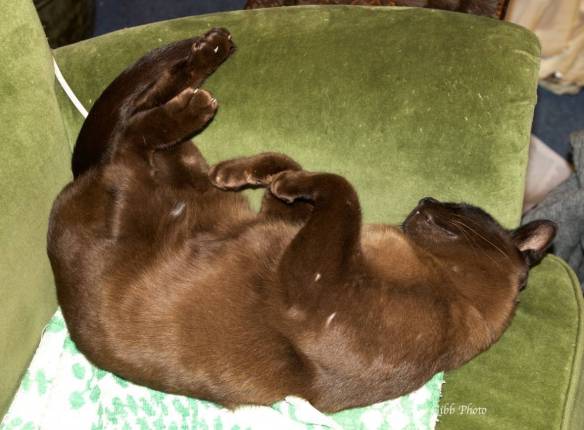 Georgie meanwhile was doing well until one day I noticed her eyes were looking distinctly weird, glowing with reflected light rather like a space alien. It turned out that she had a rare inherited condition called hyperchylomicronemia caused by excessive fatty substances in the blood. Oscar also had it very mildly. Treatment was simple – a permanent low fat diet (previously I was feeding them mainly raw meat). There have been no recurrences and both cats have been very healthy ever since.

We did briefly consider bringing one of both of them with us in the caravan. A condition of that would have been having them both harness trained. Georgie didn’t like the harness much but was fairly acquiescent, but Oscar refused point blank to be subjected to such indignity, and simply became comatose if the harness was put on him. There are a couple of videos on the web of other cats behaving similarly – being dragged along, totally limp. Oscar however did one better.

Stop attempting to drag him along and he would suddenly twist and turn and be out of the harness in a flash, no matter how tight we made it. Houdini had nothing on him. So – the decision to try to find them a foster home was not difficult to make. Finding the home was; it was only at the eleventh hour that a chance remark to my eye specialist bore fruit. (She has since won a competition for “The most unusual present given by a patient.” – two adult cats !!)

I can’t wait for the day when we can once again offer them a home. This photo was taken just before we took them their foster home. 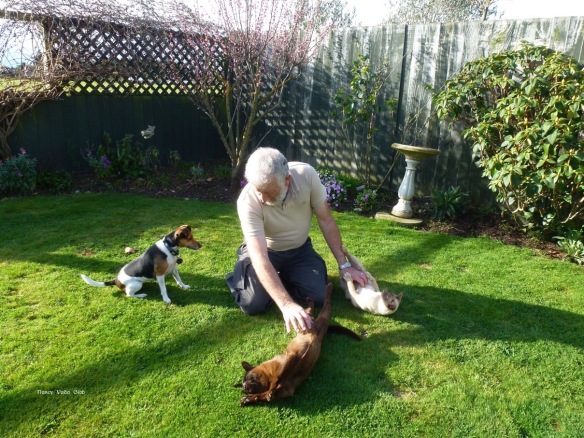 OUR LOVE AND  BEST WISHES TO ALL OUR READERS

FOR A HAPPY CHRISTMAS

AND A SAFE AND JOYOUS NEW YEAR