Time flashed by particularly quickly while we homesat in Blenheim. Apart from a couple of ‘events’ we enjoyed a very quiet, almost sluggish existence, ensconced in Robyn’s lovely warm house next to a vineyard and entertained by her garrulous little cat Kassia. Penny and Kassia have met on more than one previous occasion and had a guarded relationship, but this time Penny must have accidentally bowled over Kassia while chasing her ball and since then things have been more hostile but gradually thawing.

I’ve done lots of boring things like washing all the caravan curtains, doing some mending and having fun in the kitchen. In between visiting Robyn in hospital we did some not too serious house-and-land hunting, inspected various show homes and drove through endless kilometres of vineyards. Their geometrical precision never ceases to amaze me. 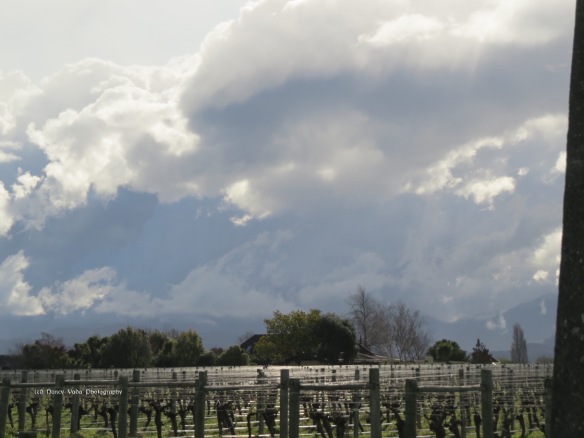 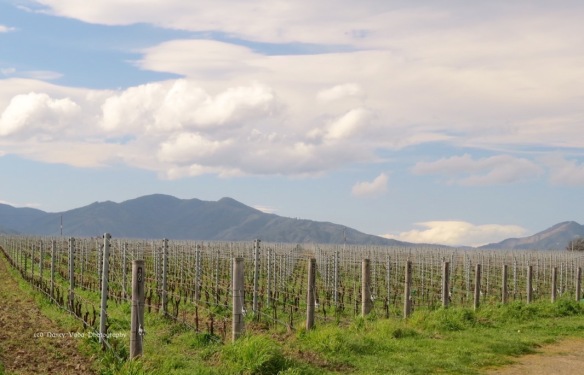 Intriguing too to see the number of workers tending the vines even though there are still barely any buds to be seen. Occasionally we spotted a cloudy UFO or two, the Blenheim skies seem particularly prone to producing them.

And we visited a chocolate factory, the smell so overpowering when you walk inside that it is ALMOST all you need to do to be in chocolate heaven – at least until they offer you a sample!

An eagerly awaited local event was the Marlborough Ploughing Championships. Here’s a shortened form of what I’ve written for the RV Lifestyle magazine:

Enormous placid horses with feathery fetlocks always attract me and I suspect many others who would not otherwise consider themselves ‘horsey’. Watching ploughing may not be many people’s idea of fun but there is something satisfying seeing those wonderful straight and occasionally not-so-straight lines of newly-turned sod appearing before one’s eyes. Also watching magnificent Clydesdale horses producing them, a task which they’ve done virtually unchanged for many hundreds of years. 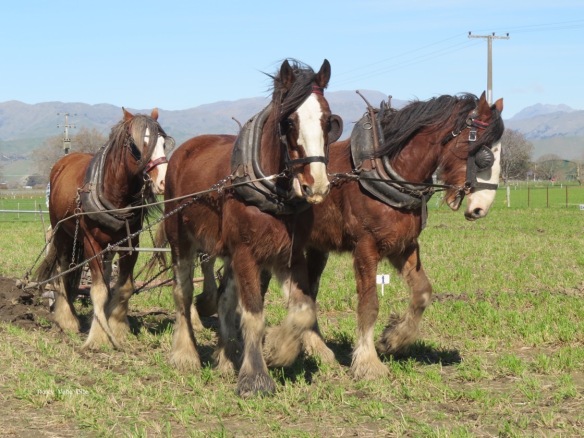 So mine were not the only anxious eyes scanning the rainy Blenheim skies for the week preceding the annual Marlborough Ploughing Championships in early Spring. Thankfully the skies cleared, and while gum boots were the only sensible footwear and the wind blew chillingly straight off the northern mountain range, the sight of 4 teams of horses pulling vintage ploughs, about ten vintage tractors doing their thing in the next paddock, and steaming hotdogs with onion and tomato sauce from a food tent threatening to blow away at any moment were enough to keep me entranced for much of the day.

There were two 4-horse and two pair ploughing teams. Although the basic premise is simple, I was surprised at the range of different ploughs starting with a simple one-disc walk-behind to an elaborate two-disc contraption operated by a system of brakes and levers with the ploughman sitting in a special seat. 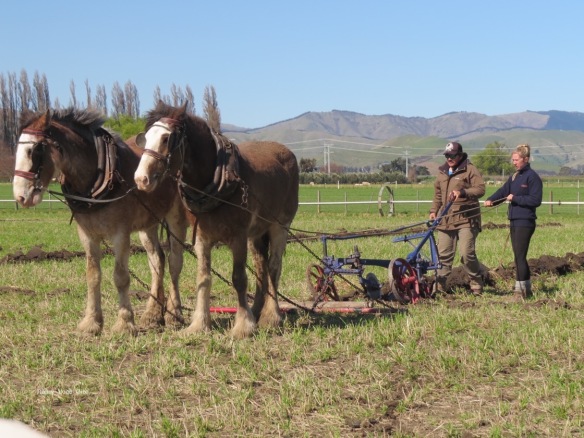 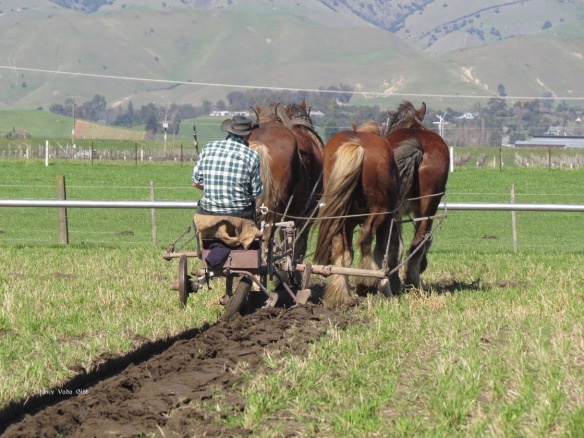 Add to that the need to control the horses, partly by long reins held by either the ploughman or a ‘walker’, and also by voice commands (“Forward one step”, “Whoa”, etc) and the complexity of harness – chains, collars, leading reins – and one begins to realise it’s not just a simple process. How long does it take to harness the horses and hitch up the ploughs I wonder, especially with larger teams of 6 or even more horses.

The object at the Championships of course is to plough the straightest furrows at just the right depth. The first furrow takes the longest time to do, with regular stops for adjustments. The patient gentle Clydesdales seemed unperturbed at the long waits although the leader of one team seemed to be saying “Hurry up, when do we start?” 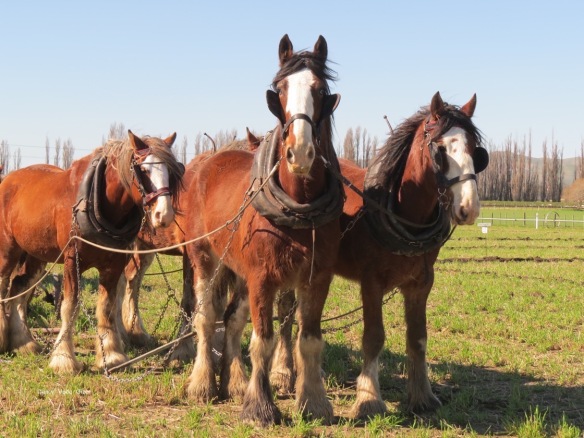 And how do they ‘turn’ at each end of a furrow? Those huge Clydesdales do some fancy footwork, crossing their front legs in unison to turn effortlessly in what seemed an amazingly small space. The plough they were pulling needed far more work to be hauled around!

But it wasn’t all horses. There were about 10 vintage tractors, most gleaming with fresh paint. One in particular, a John Deere 40 driven by a woman, has been in the same Blenheim family since the 1950s. The drivers seemed to spend more time looking behind than looking ahead.  And just like with the horses, frequent stops for adjustments were being made in the quest for perfection. 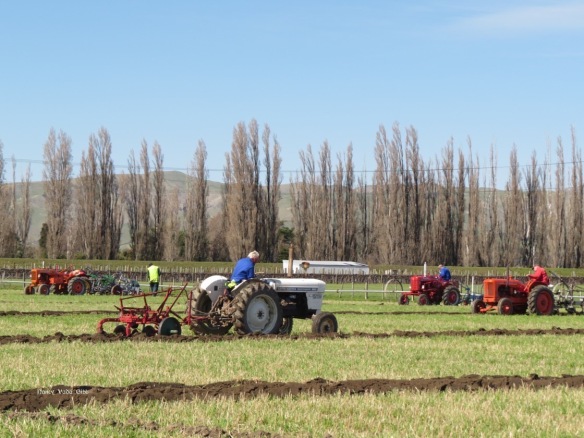 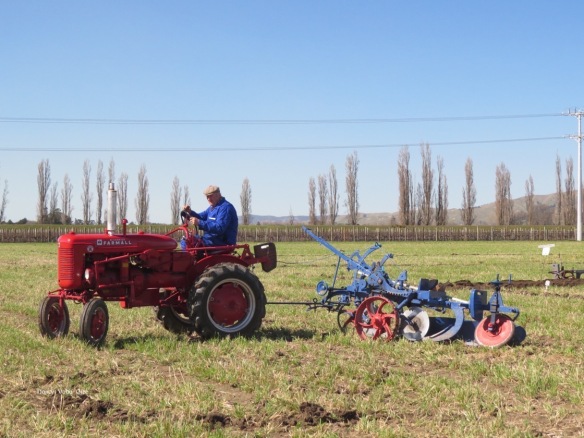 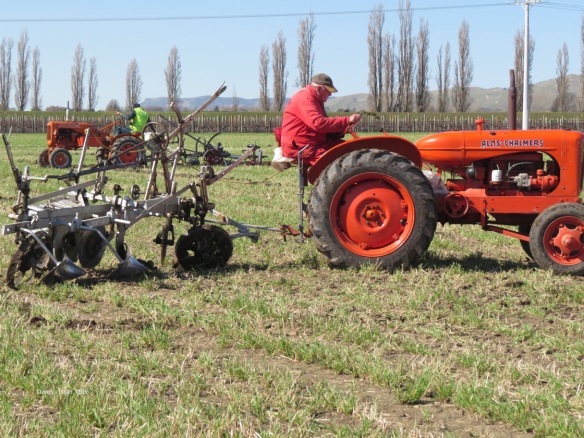 There was also an exhibition of sheep herding by an amazing dog named Shane, and for children the obligatory pen of new-born sheep, a young friendly sheepdog and a rather fat pig named Carol who we ‘met’ last year when she was a tiny piglet; mostly she seemed intent on copying the tractors and ‘ploughing’ her own special furrows. 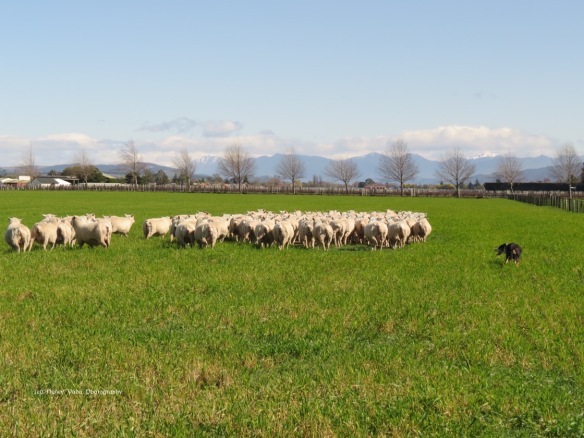 The event was hosted by the Marlborough Ploughing Association and Tua Marina Vintage Traction and Machinery Club. Up to 23 qualifying events are hosted by individual Associations throughout NZ. Winners are selected to represent the district in the annual NZ Ploughing Championships held in April or May each year. It goes further – the World Ploughing contest will be in Thisted, Denmark in early October this year with 30 countries competing. Serious stuff.

Tony from Christchurch came up for a few days; we plied him with food and drink and took him to Rarangi Beach and then Port Underwood, where the catches of various seafood is strictly limited.

Everywhere the gorse blazed bright yellow. Back to Picton for lunch and to watch one of the inter- island vehicular ferries arrive. All too short a visit, but it was lovely to see a familiar face.