Back in Bowen from Yellow Belly it was all systems go to prepare for the Airlie Beach weekend market where Patrick sells his justifiably famous Bowen Mango Sorbet.

The one-hour drive south from Bowen at dawn was frustrating as the most glorious sunrise could be seen through the trees but we could not stop to take photos.

We reached the markets in good time and helped Patrick set up his stall, then for the next 7 hours he churned out sorbet after sorbet as Dave handled the cash…….

…… and I wandered around trying to resist the amazing array of goods at one of the best markets I have seen.

I did buy a lovely gypsy necklace in turquoises and blues, and a bracelet to try and make my newish medicare bracelet look a little less horrible (it broke 2 days later), admired the intricate shell ‘curtains’ at one stall…. 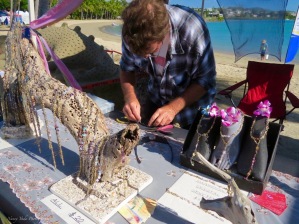 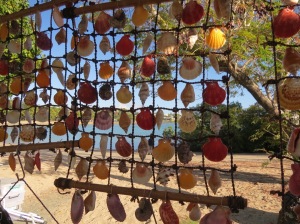 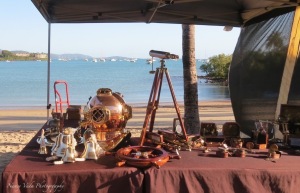 …..  the amazing dance a young Japanese girl did with a shiny orb which seemingly never touched her fingertips, the sand sculpture of a fire-breathing dragon, and of course sampled the food including that same Hungarian friend bread which was such a hit at the WOMAD festival in NZ a few months back. 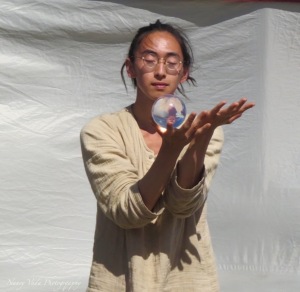 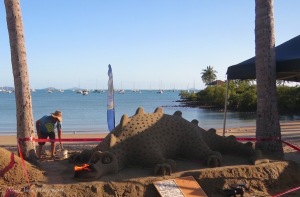 The air next to us was full of bird calls as the vendor played endlessly on his wares, and further away a band played an eclectic mix of didgeridoo plus guitar  … 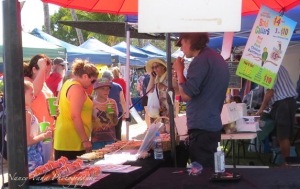 Camel rides on the beach were obviously popular.

Our main objective on this Aussie trip was after all to search for a suitable caravan and tow vehicle, so reluctantly saying goodbye to Patrick and Sylvie and their incomparable French hospitality (and YES we did have a huge meal of king prawns on one occasion and plenty of mango sorbet!) we boarded a Greyhound bus for Townsville. The front seats being free, Dave had a good time sorting out the world’s problems with the driver while I was content to admire the scenery.

We had booked into a motel near the waterfront so did not have far to go to find some good food. Next morning we picked up a hired car, a very pretty little blue something, and for the next 2 days investigated caravan yards, finding several reasonable vehicles but not anything that really grabbed us. By this time I was feeling rather unwell and the heat was not helping, but we continued as planned, dropping off the hired car on the way to the airport and collecting another vehicle (a cute little red Kia) at the other end in Brisbane.

Our plan was to go straight down to Coffs Harbour and THAT caravan, but it seemed impossible to be in Brisbane and not do some visiting so visiting we did, and stayed overnight with some old friends and rewarded them with a dose of my developing cold. I feel so bad about that. Dave was also feeling a little unwell by this time.

But we accomplished the drive to Coffs Harbour, booked into the first motel we saw, had a lovely Indian dinner and next day finally saw THE caravan, a Jayco the same length but three year older than our NZ home. And very nice, too! I was immediately enamoured. The tow vehicle is a grunty black Jeep Cherokee in excellent condition. Some repairs to the caravan are currently being carried out and so it will not be available for about 2 months. Dave wants to wait till we have been to the Maryborough Motorhome and Caravan show next weekend before making a final decision.

Next day we made a quick trip to Port Macquarie to try and locate my errant brother Barry. We went to his last known address and were told he had left 6 years previously. But eventually we found him in a nursing home in nearby Wauchope. it was good to know he was being well cared for in pleasant surroundings.

Meantime I was developing a bad case of bronchitis coupled with a cold and not feeling very happy. Nor was Dave.

After spending an hour with Barry we returned to Coffs Harbour. A second night in the motel there and then on Saturday morning we left to head quietly back to Brisbane… but by the time we reached Brunswick Heads Nancy was coughing full time and I was feeling like I had been worked over by a heavyweight boxer so just before lunchtime we went in search of a motel to hole up in for a couple of nights, Nancy thinking she could shake off the coughing and me to overwhelm my bugs with a dose of alcohol. A very small “supermarket” just down the road from the motel provided essential sustenance so we turned the heater up high and settled in.

By Monday I was feeling fine but Nancy was definitely not so we headed off to the local medical centre for a consultation…  Bronchitis!!!  Not what we needed but because I was feeling good we drove on to Nic and Mick’s place as planned.

Then the lurgy struck again and I started coughing as almost as badly as Nancy, getting pretty frustrated with it all actually and the sooner I can shove it off the better.. Definitely wasn’t covered in our pre-winter flu shots.

Nancy: so here we are still with Nic and Mick who are looking after us both well although they do follow us around with cans of antiseptic room freshener! After a few days of rest and sunshine in gorgeous bush surroundings I am feeling much better and have taken some photos of the magpies continually stalking the back lawn and a resident pair of parakeets, but Dave is still not 100% either so we have decided to forego to Caravan show at Maryborough and instead concentrate on getting better before catching the plane home on Wednesday. All plans for visiting Brisbane friends are off. 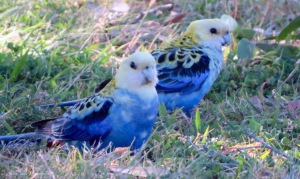