After the excitement of Horse of the Year we had 4 days to get down to Wellington to catch the ferry back to the mainland (for non-Kiwis, that’s the South Island). We headed back to Marton for one night then down to Wellington and the usual Petone POP site, not particularly salubrious but handy to Wellington city and the ferry. Except that Petone only allows two night stays now, so we went to another Club POP at Lower Hutt for the first night then Petone for the next two.

Collected mail, did washing, tried in vain to meet up with Dave’s great-nephew (couldn’t find the shop where he worked) and great niece (very busy) and my distant cousin (ill with flu), drove around the city for some time and got thoroughly fed up with all the traffic.

We did have one highly productive afternoon when we visited the NZ Archives in Wellington and were able to find all Dave’s father’s employment records which showed where he had worked and for how long during most of his working life. Here’s the last of several cards:

I was also able to find several records pertaining to my Great Uncle Robert Wentworth Wade of Hokitika who was appointed the Deputy Official Assignee in Bankruptcy (a NZ term for Official Receiver, a Government position authorising him to act as a receiver, trustee or liquidator during Bankruptcy proceedings) in 1891. It was interesting to discover that his posting was not without controversy, not on his own account but because his predecessor was accused of withholding government funds and protested vigorously about his innocence in the local newspaper – there were even some newspaper clippings in the file. 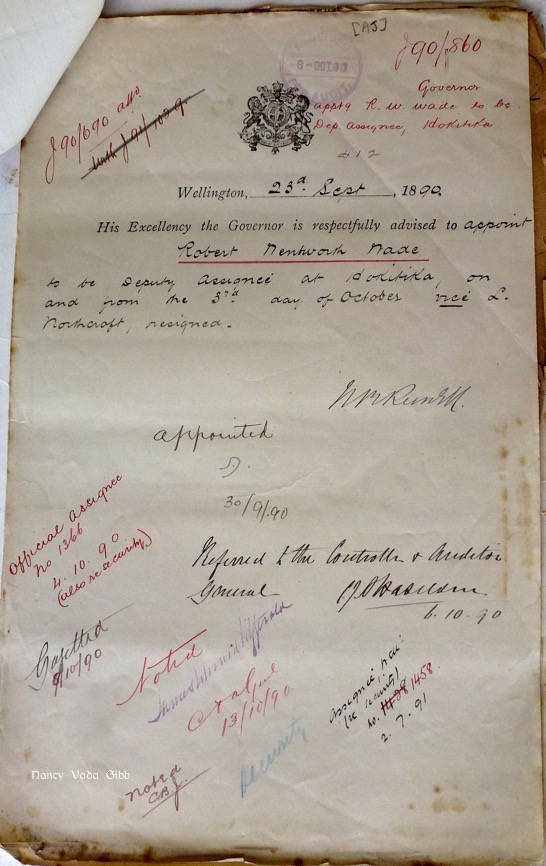 We arrived early at the BlueBridge ferry terminal and initially parked in the wrong place as there was nobody to guide us, resulting in Dave having to reverse the caravan for some distance, no mean feat. The rest of the ferry experience passed without comment, the sea was very calm despite the usual weather forecast predicting otherwise. A flock of colourful little butterfly yachts were whirling around as we arrived at Picton. 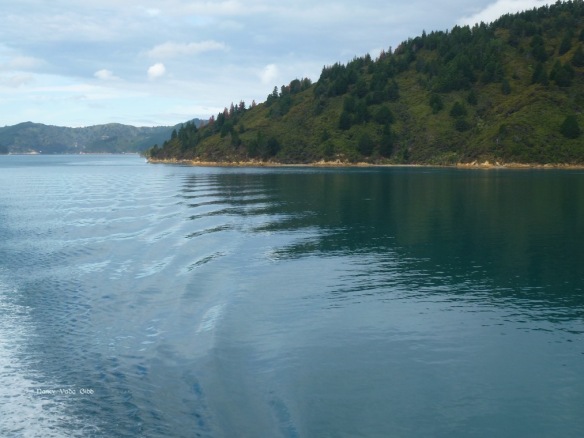 We drove straight to Robyn’s welcoming backyard in Blenheim where we will stay until after the Omaka air show over Easter. As usual there was a great sunset that evening.

A visit to the Blenheim ‘recovery centre’ was enlightening. Very little waste goes to landfill. 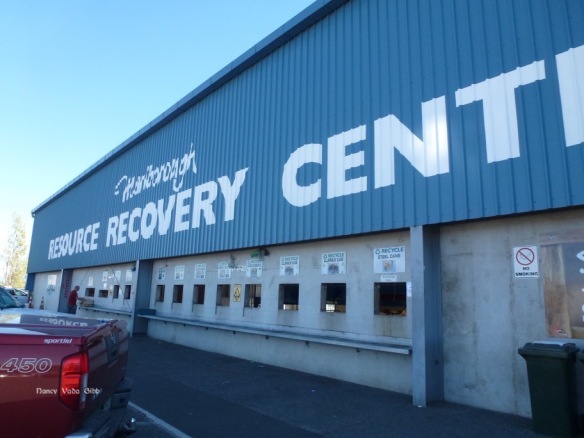 So far we’ve made two all-day trips with Robyn, the first to Ruby Bay where we had a picnic lunch with Robyn’s old school friend. The beach at Ruby Bay is as glorious and unspoilt as ever and we would love to live there, but prices in the area are rather high.  First discovered by French explorer Dumont D’Urville in 1827, it was described by Captain Arthur Wakefield who camped on the beach  in 1841 as “… having all the necessaries of a NZ beach: Good shelter, dry wood and water in abundance.” 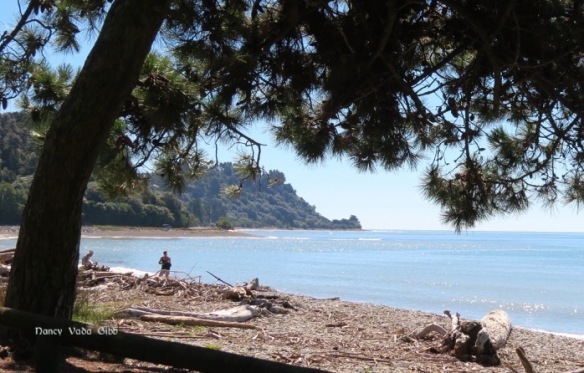 Blenheim is a very welcoming place, particularly at present where the grape vines are still ripening. In a few weeks’ time they will be mostly bare of leaves. 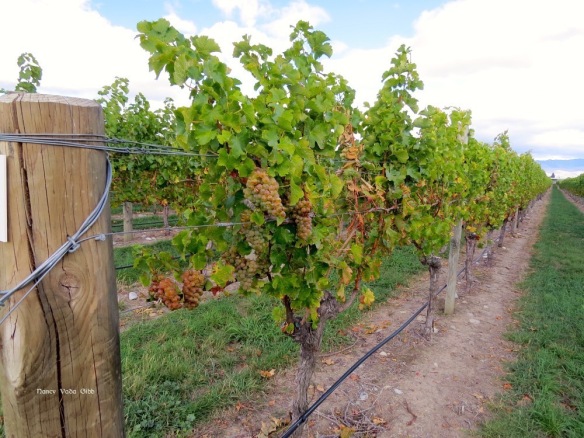 We made another day trip with Robyn to Kenepuru Sound, which runs parallel to Queen Charlotte Sound but is not linked to it. Although the distances were not really great, the time taken to drive the narrow exceedingly twisty roads certainly was! Some 40 minutes later and half way between Havelock and our destination near Kenepuru Head, we turned off for some welcome coffee at Te Mahia, one of the original resorts in the Sounds. Early travellers would have had to arrive via boat up Queen Charlotte Sound then an overland journey.  www.temahia.co.nz  A cheeky weka wandered around pecking at things … including my posterior! The coffee was excellent.

We had lunch at the DOC recreation reserve and campsite at Kenepuru Heads, with its very clean facilities including a shower and open kitchen. There were many flat, cleared spaces suitable for large caravans and motorhomes although I did wonder how many would attempt the long narrow road to get there. One week before Easter there was only one caravan ‘in residence’ – plus a walking threesome who, we learned, had walked all the way from Bluff! They were near the end of their three month journey, one of the men wearing a Black Stewart kilt which had faded to brown. I’m hoping they will send us the URL of their blog which they have promised. 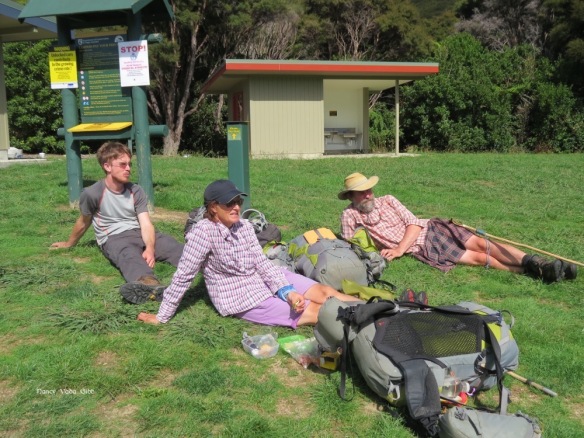 On the return trip to Blenheim via Havelock we stopped off at Sandy Bay, admired the signpost at the Portage, decided not to investigate some land for sale any further despite the fabulous views, and stopped off at Te Mahia again for more coffee. I would NOT recommend any large vehicles such as a towed caravan trying to descend from the main road and then negotiate the hairpin bend at the end – we had to do a 3-point turn even with just the ute. 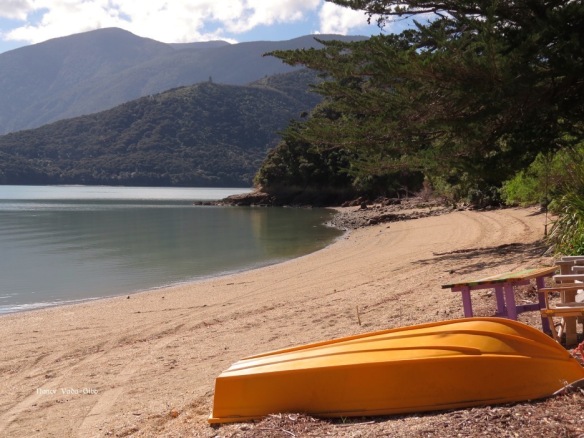 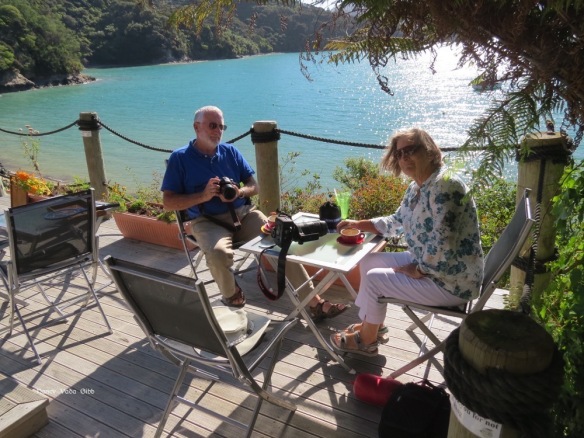 At Double Bay Reserve which wasn’t even on the map we discovered one more lovely little bay with yellow sand and a camping area. All along the way there were wonderful glimpses of the Sound.

Finally we reached the outskirts of Havelock and were able to head back to Blenheim, sunburnt and happy and photographed out – well, I was anyway.

The Omaka air show is due to start tomorrow. As I blogged on it last year, this time I am going to sit back and watch the pretty planes and not attempt to take photos, I’ll leave that to Dave and his telescopic lens.

1 thought on “84. Back to the Mainland – Marlborough Sounds”