Leaving Hamilton we drove over one of the many bridges yet again, which reminded me of Dave’s wonderful story of when he was a school Army Cadet ….

When I went to Hamilton Tech we were put into the school cadets whether we wanted to be or not. Fortunately for me I was drafted into the REME (Royal Electrical and Mechanical Engineers) platoon so while all the other poor sods were out on the sports field square-bashing our platoon was squeezed into an Army 4 X 4  and a recovery vehicle and driven down to the then city dump on the banks of the Waikato River where we spent our days pushing an old Bren Gun carrier into the river and then working out how to recover it using the winches and blocks and tackle and ground anchors etc. And as soon as we had it back on dry land we would push it back in again. All under the relaxed supervision of a couple of regular army soldiers. Amazing fun on a beautiful summer’s day. Fortunately OSH hadn’t been invented back then!!!!!

Came ANZAC day and Dawn Parade. We were mustered at Garden Place and marched down the main street, left turned at Victoria Street and across the bridge. Large numbers of people marching in step can create extreme stresses which have been known to make bridges collapse in the past so just before we arrived at the bridge the NCO called “Break step!!!” So we all did a little shuffle and carried on…..   still in step!!!  About halfway across and the bridge was swaying alarmingly when a Regular NCO came racing up and screamed at us to “BREAK STEP!!!!!!  HALT!!!!!  NOW WALK!!! ONE RANK AT A TIME!!!! GO!!!” So we all shambled across the rest of the way and reformed ranks on the Riverside road for the rest of the Parade. My first ever Dawn Parade.

We were heading for Paeroa again but a phone call advising that a new seat cover would not be ready till the Friday caused us to divert to Tauranga, specifically the NZMCA camp at Tauriko on the outskirts where we have stayed before. It’s an ideal place from which to make sorties to various parts of Tauranga and points beyond without having to go through most of the city proper every time. Maximum length of stay 3 nights which suited us perfectly. On the way I admired yet again the contrast between the Kaimai mountain range and the Waitako plain, the latter covered with dairy cattle and cornfields. (And yet again there wasn’t time to go back to that wonderful Italian restaurant in Te Aroha!)

Along the way Dave suddenly said “fireworks ahead” which translates to a cop car with flashing lights – and a glass-laden lorry on its side in the ditch. The thought of the clean-up boggled me.

We went to Rotorua for the day so Dave could have lunch with his old boss from umpteen years ago. It was only 77 km through some diverse country, at first very hilly, all lumps and bumps and welcome patches of native forest plus the inevitable pine forests with the roadsides lined by waving toi-tois. I do love those native plants and the way the light shines through them. Then through Mangorewa Gorge, it must have been quite a feat cutting through all that rock and leaving serrated/ribbed patterns. Some especially steep faces are now covered with ferns peeping through the safety netting.

We stopped at a site which commemorated the building of the road. Signs told the story. Imagine a coach in 1873 with 4 horses, all the way from Napier to Rotorua then on to Tauranga. How long did it take? The first motorcar to use the Gorge road was a 6-seater Darracq in 1906. Then early in WW2 it was feared that the Japanese would invade NZ and the Home Guard built over 1200 road blocks to stop the move meant of tanks.

Mangopouri Gorge which followed was much less spectacular but with the same twisty road.

And so finally to the huge Lake that is Rotorua. I thought I could smell the characteristic sulphur smell immediately but it was probably just a passing truck. We had a lovely but far-too-much lunch at the lakeside, Dave and Harry never stopped talking. I left them to it and took Penny for a walk. It seems there’s more than one way to view the lake – from the shore, from a huge ferry serving lunch, from smaller boats, from a helicopter, or from a fixed-wing plane. All available from the same place too.

We also saw a part of Rotorua I did not see last time, with some interesting if rather tourist-trap old buildings and a very new one framed by a park entrance. 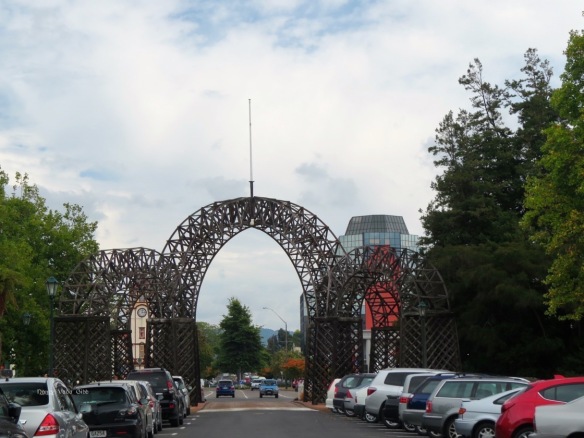 Back to Tauriko, a restful day, and finally contact with someone who had a large Clan Cochrane sign ready to deliver to us. At the Paeroa games we’d been approached by a past Tauranga Games committee member asking if we knew anyone who would want any of the old Clan signs. After contacting the NZ Clan Cochrane Commissioner I put in a claim for the Cochrane one. It is huge and needs some touching up but we are happy to transport it by degrees down to the Commissioner at Waikanae. When on the road it sits inside the caravan and is put outside at night – the Cochrane Cat? 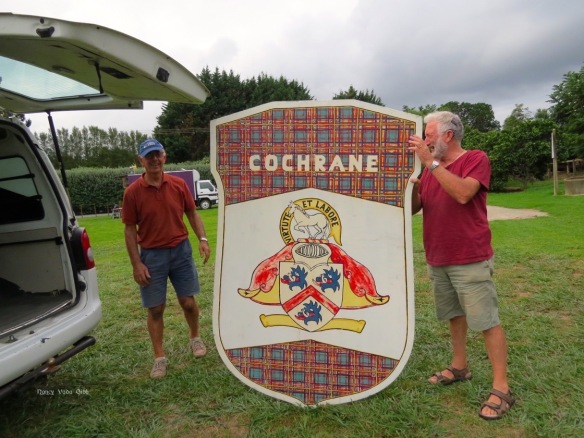 …… we headed back to Paeroa – again! – not a hardship though, I’m really getting to know the pretty Karangahake Gorge Road. One night at the RV park in Paeroa where dogs are welcome, a new cover for Dave’s seat (still under warranty and already been replaced once) and we set off about 3 pm for New Plymouth, arriving some 4 hrs later with a brief stop for the most awful carrot cake I’ve ever had at Te Kuiti (the coffee was OK though). 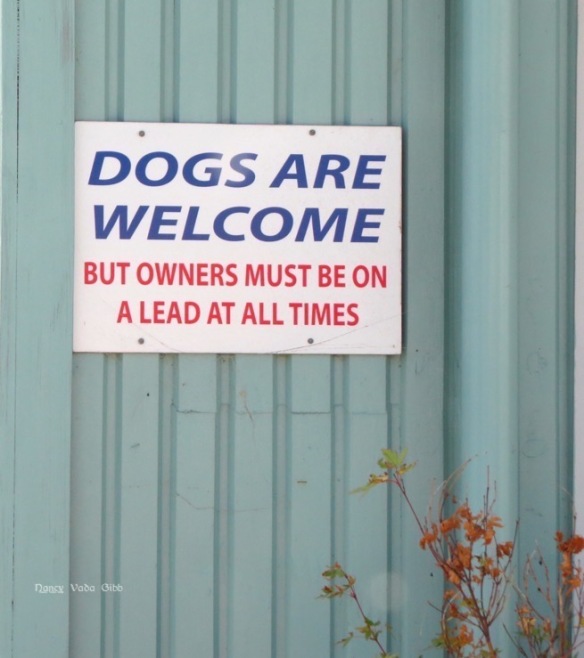 The highway from Te Kuiti to New Plymouth is exciting and exacting, not something you’d like to drive in heavy rain. Two tunnels are involved and as usual I did not have my camera ready for the first one and we could not stop … another wonderful photo that will remain in my mind’s eye. 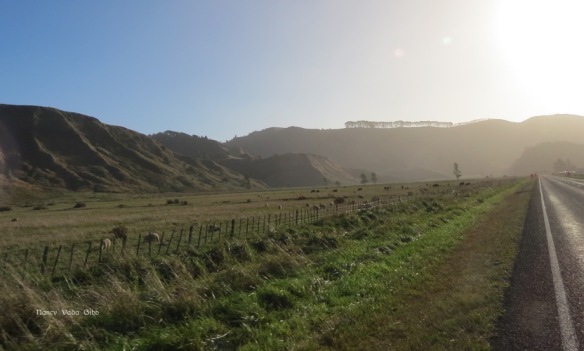 We wanted to catch the start of the Variety Club’s annual Bash (see  <bashnz.co.nz> and Facebook  page ‘Variety Bash’) in New Plymouth.  Dave’s nephew Budgie was in it for the 20th year and up to his usual foamy fire-hose tricks……. 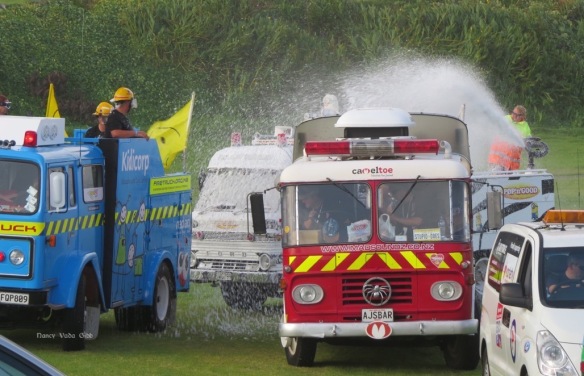 ……. and Jacqui was the official photographer – which meant she had the privilege of being hoisted high above the assembled crowd at the official starting venue at the New Plymouth Surf Club.The hoist operator turned out to be an old acquaintance of hers (of course) … NZ being relatively small and RELATIVELY unpopulated I’m now used to Dave or others discovering old acquaintances or at least people who knew them, seemingly every couple of days. 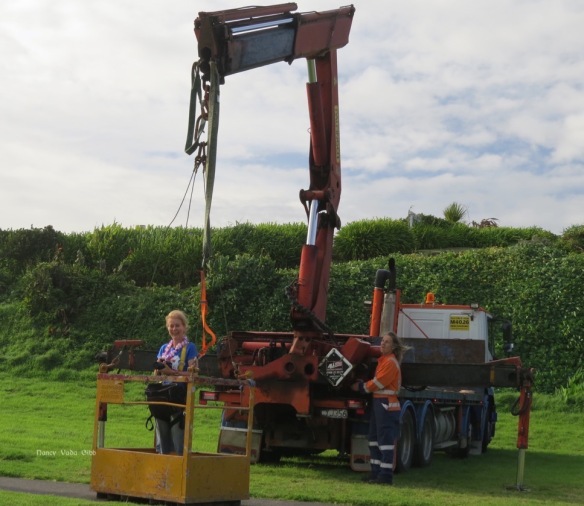 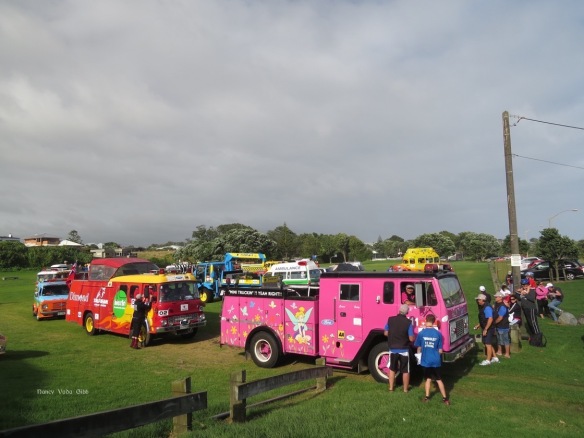 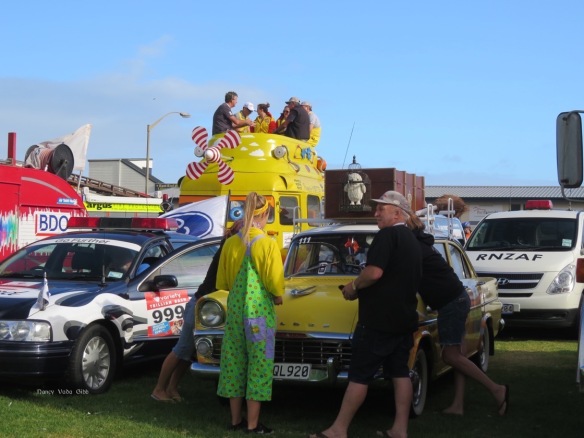 We now have a week to wait until WOMAD, for which we are getting official press passes. I’ve been asked to write a story for the RV Travel magazine. Incidentally my little piece about the Vans & Vines at Martinborough has been published, with photos of Dave and Penny.