The weather or rather just the wind became progressively worse each day. Caravans and motorhomes rocked and rolled. People started leaving earlier than planned. Some went to Lake Ferry – just as bad there! – others continued all the way back to Lake Reserve at South Featherston so they could visit the Fell museum, which we saw early in our ramblings. A few went directly to Martinborough and the site of the Vans & Vines festivities which were to mark the end of the safari. 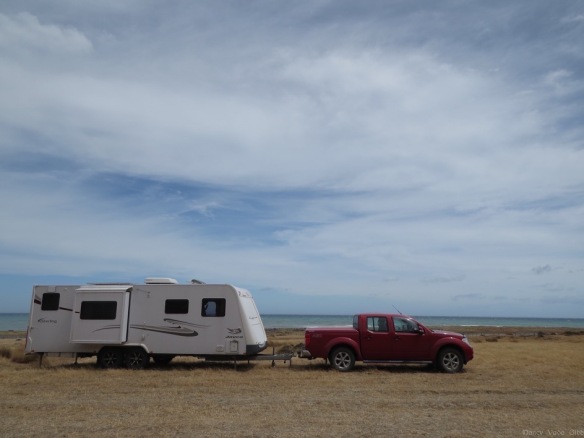 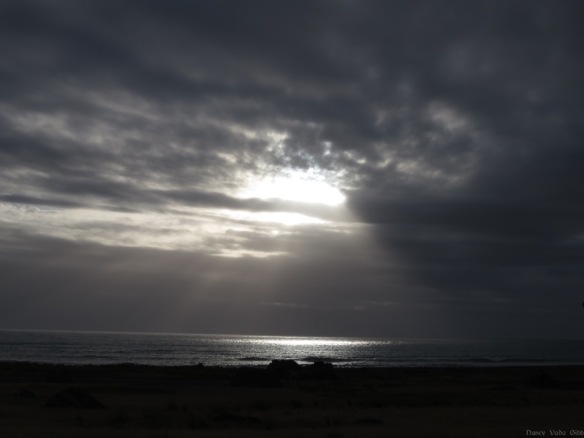 We too left Ngawi a day early and drove along the shore of wind-whipped Palliser Bay, past eroding cliffs where signs warned us not to stop, then up through the mountains, past the wind farm, and on to the gentler Wairarapa plains. 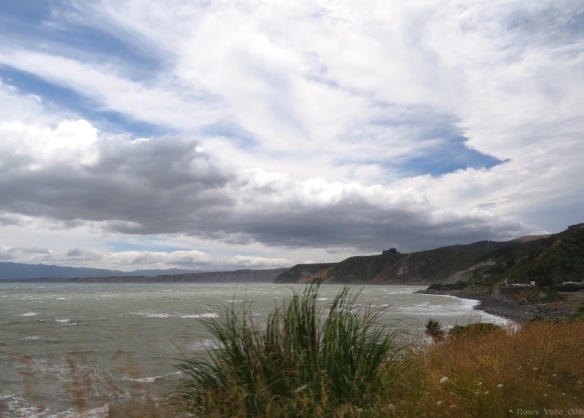 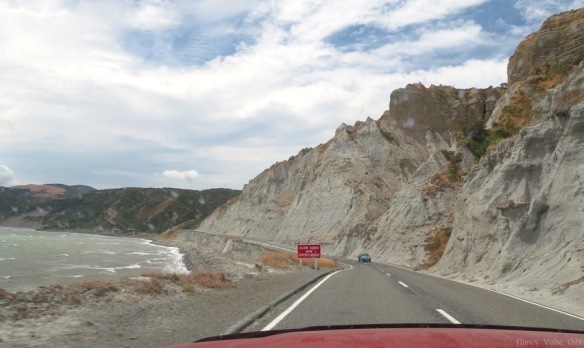 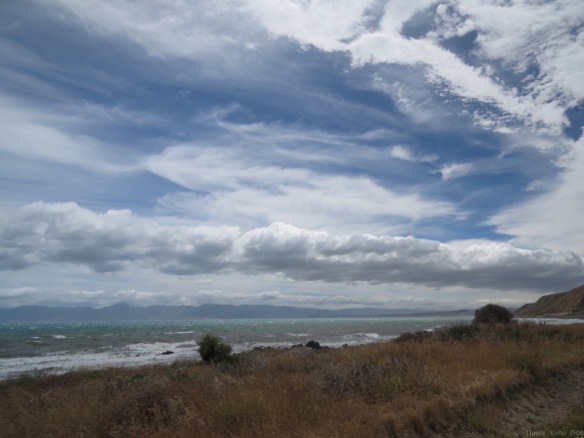 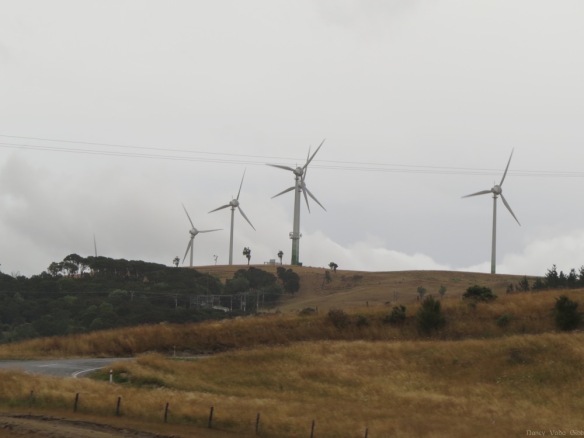 We spent two nights at Lake Featherston where we wisely chose to set up away from the shore,  nearer some sheltering trees. We were looking forward to collecting our mail and getting some washing done.

While travelling we use a mail redirection service based in Wellington; it holds all Vour mail until Dave orders it sent to a convenient post office. This has worked very well. The redirection service lets us know when mail arrives at their office and if it sounds urgent we can ask them to open, scan and email. Knowing we would be in the vicinity of Greytown Dave ordered our mail sent there to arrive a day or so previous to our arrival. We rolled up to the small PO – part of a new supermarket complex actually – to be told (very rudely) “WE DON’T DO COURIER DELIVERIES SO IF WE GET SOMETHING WE SEND IT STRAIGHT BACK!”  What?!

Back at the camp Dave spoke to a couple of other NZMCA members and learned that certain POs do not handle anything except stamps and are listed on the PO website (which of course we had not thought to consult). But when Dave checked he discovered that the Greytown PO did NOT have such a restriction according to their webpage. Grrrrrr.

Faced with the option of reordering the mail to be sent to a future destination and not getting it for about 2 weeks, we decided to drive down to Wellington for the day. 42 km as the crow flies but some 72 km over the Rimutakas. This turned out to be a surprisingly good decision. Not only did we collect the mail but we were able to get some chemicals for the caravan toilet, get our internet service sorted out with Vodafone (a surprisingly good deal, we just happened to be in the right place at the right time), and get some much-needed haircuts. Regarding the latter I hate going to strange hairdressers, never knowing if they will be choppers or proper stylists (never mind what they claim) ….. this time Lady Luck was with me and I found a really great one in Upper Hutt. Dave found a barber close by and there was also a cafe where we liked the little gourmet pies so much we bought some more for our dinner. Amazing really as we were heading for ‘home’ again when we decided to turn off at Upper Hutt.

The final day of the Wairarapa Safari was marked by the Van & Vines charity rally sponsored by RV Lifestyle Magazine publishers and some local businesses. Very well organised, it was held in the Martinborough Rugby Club grounds, where dogs are not normally permitted. However with special permission all dogs (and their humans and homes) were in a special section at the end of the park. (A huge number of vans can be seen in the far distance). 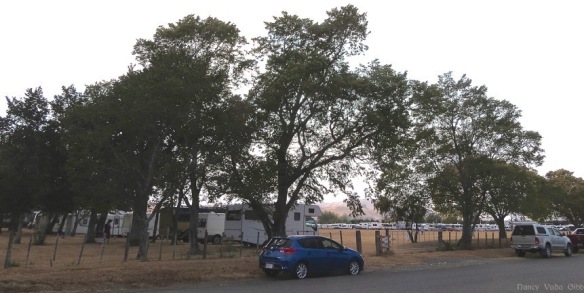 I was asked by the editor of RV Lifestyle to write a short piece about the weekend. Here it is. At this point in time I don’t know if it is actually going to be published.

We were literally blown into the Vans and Vines event at the end of a wonderful Wairarapa Safari which took us from Castlepoint to Cape Palliser and various places in between. (photos?) After rocking and rolling the previous few nights a more sheltered site was appreciated. We knew we were heading for the Dog House – just joking – and appreciated the persistence of RV Travel Lifestyle in negotiating with the Martinborough Council to allow dogs into Coronation Park. This involved a temporary amendment to the dog control bylaw and placement of a temporary fence to separate us dog lovers from all the other event participants.

Not that we or the dogs minded. There was plenty of space for doggy walks, doggy meet-and-greets and other doggy doings. It meant we were considerably closer to the Fair if not to the Van & Vines event centre. During Happy Hour all the dogs seemed happy guarding their respective vans while in eyesight of each other while their owners were happy elsewhere.

We were very well fed over the weekend. First the Friday night complimentary dinner sponsored by Premier Beehive, Fresh Choice Greytown and Tui; then Saturday night’s Junior Rugby Club fundraiser. Then to top it off Sunday morning’s breakfast of wonderful paua fritters, bacon and more chorizo sausages. So many sausages were given out as raffle prizes and other hand-outs, I wonder if there was a single caravan/motorhome without some.

Not having to cook perhaps made people extra generous, the array of donated food for Cancer research was awesome. (Everyone was asked to pose behind the mountain of food for a group photo which will be in the magazine).

Saturday morning the Fair was in full swing when we arrived, Penny the foxie in tow. We humans were impressed by the number and diversity of stalls and other humans, Penny much less so. Particularly when she was trodden on. Not really a place for small dogs but she did manage to meet a few others nonetheless. She did enjoy the wonderful smells at the dog food and bedding stall.

There was a bewildering variety of stalls – clothing, crafts, food. I bought some earrings and Dave couldn’t resist the sight of the Twisted Chips. One potato made for a great many ‘chips’ which we all enjoyed, Penny included. We did not try out the curry goat – maybe next time! 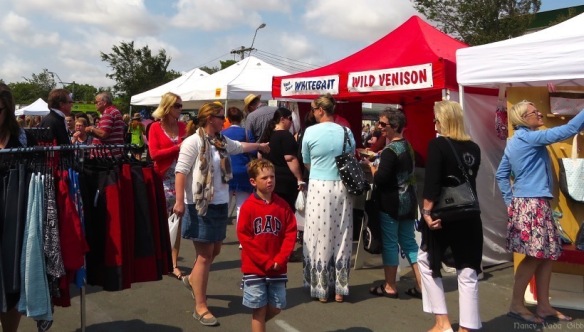 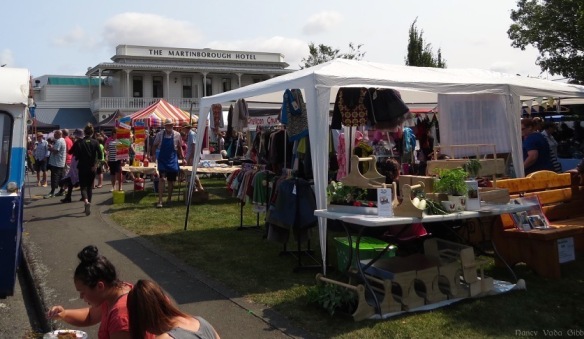 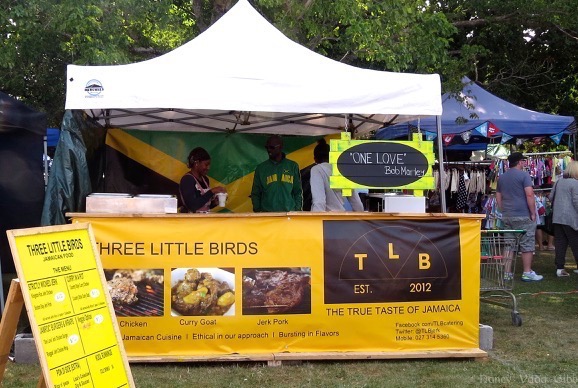 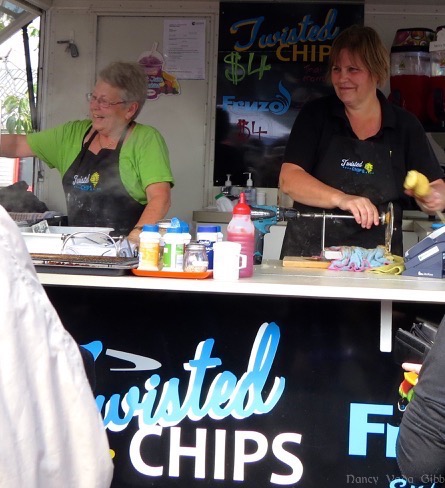 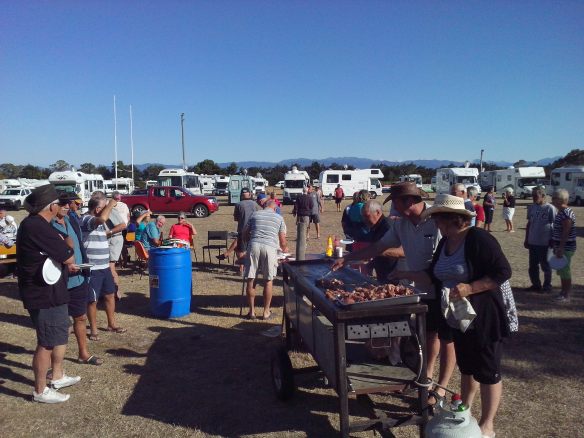 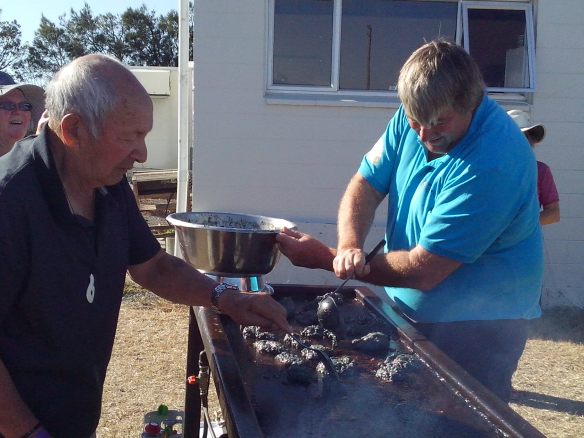 After Sunday’s paua fritter and chorizo breakfast we packed up and took off heading north towards Hamilton with no fixed stop in mind apart from a whistle stop with David and Marion Johnston, Penny’s “other parents”. David took a photo which is now on the Clan Johnston webpage. We planned to meet my old friends from Bowen Queensland on the Tuesday. 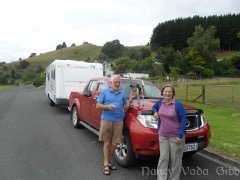