We’d heard about a new NZMCA camp in Rotorua so having obtained details via the web headed off for the steamy town. The camp turned out to be high on a hill in the northern suburb of Ngongataha, the site of the old stockyards we were told, with imposing brand new wooden entrance gates leading to what seemed acres of concrete in reasonable condition surrounded by newly-landscaped grassy areas. 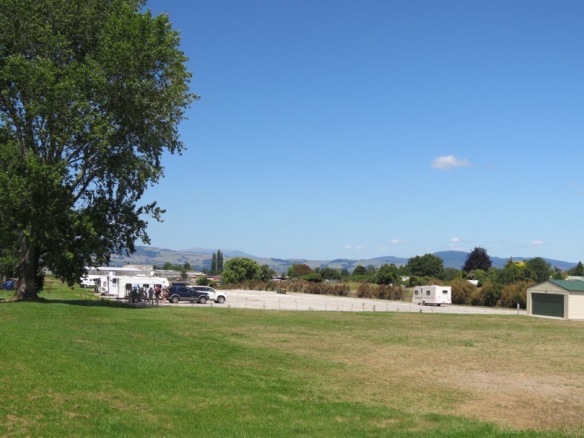 It also sported a brand new very accessible grey and black water dump site, water and a row of rubbish bins, not exactly beautiful but to travellers like us a welcome sight. I dislike having to put all our recyclables etc in the same bin as genuine rubbish, and also having to seek out sometimes difficult-to-access dump sites when our tanks start to get a bit full. We can go for at least 6 days if we are careful with water use.

There are some curious old trees in the grounds, some have grown right round old fence posts. An old stump sports a large carving and an assortment of fungi. Blackberry canes adorn one side fence. From a little rise at the rear a glimpse of the main Lake can be seen. 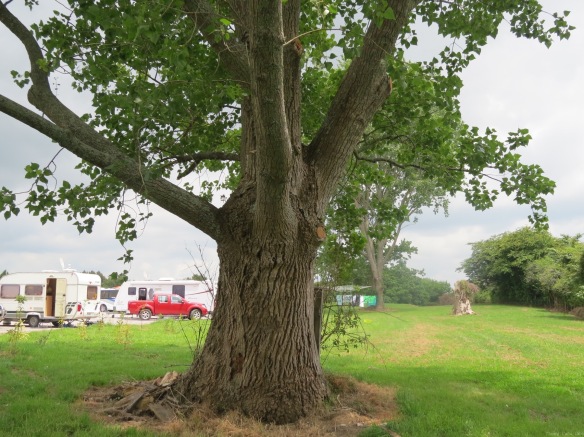 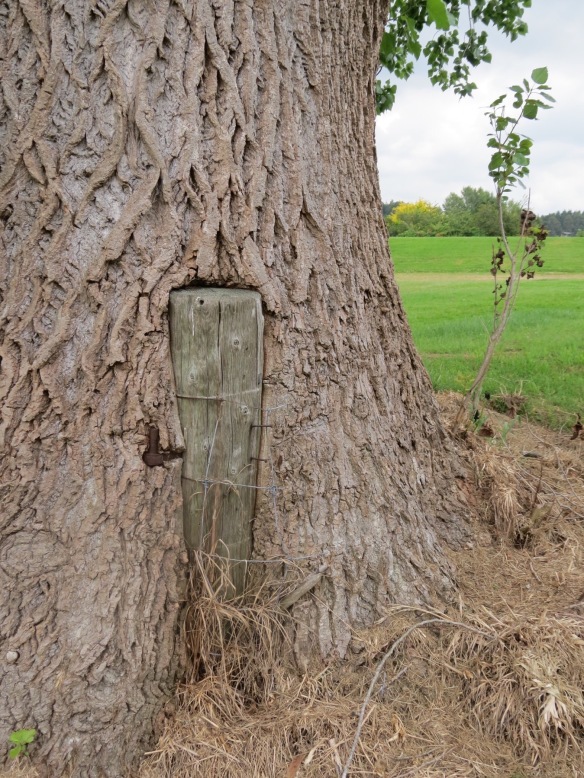 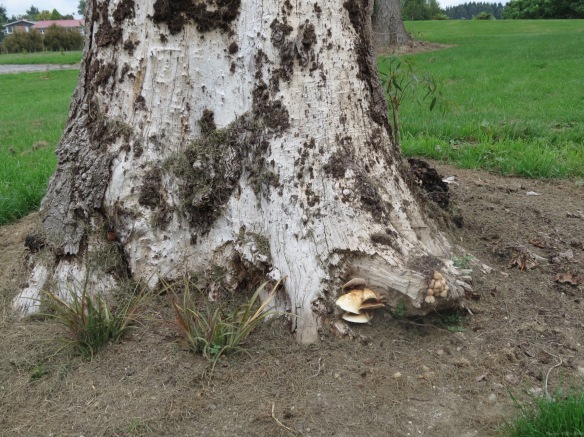 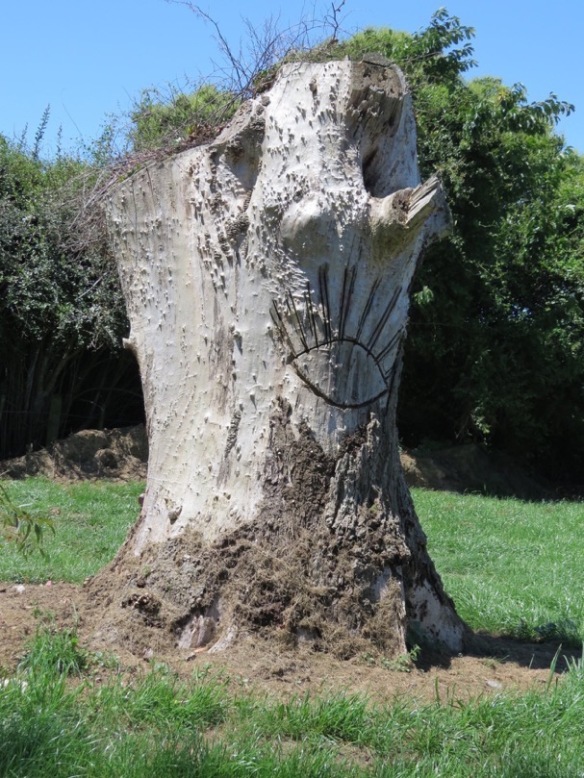 Five minutes’ walk from the gates is the village of Ngongataha with a $3 laundromat, 2 small supermarkets, cafes, fish shops, etc. Nearby is a miniature train railway. So, a great spot to spend a few days especially if one has small children, although most NZMCA members are more in the grandparents category.

The windscreen of the ute had developed a large and ominous two-tailed crack so off to Smith & Smith next day for a full replacement. No problem ….

Dave caught up with an old friend from living-in-Rotorua-with-motorbikes days, who printed us some beautiful new “business” cards as the old ones had our old blog URL and were also a little hard to read. Not so the new cards. Thanks, Larry!

Having been to Rotorua more than once I was not so interested in seeing the thermal attractions, but a raptor park sounded different. The Wingspan Bird of Prey Centre was established in Rotorua in 2002 in a beautiful valley not far out of town.

“At Wingspan’s core is a commitment to the conservation of the threatened ‘Karearea’ New Zealand falcon. Being part of New Zealand’s unique natural heritage, falcons are a taonga (treasured) species to tangata whenua (Māori, people of the land). 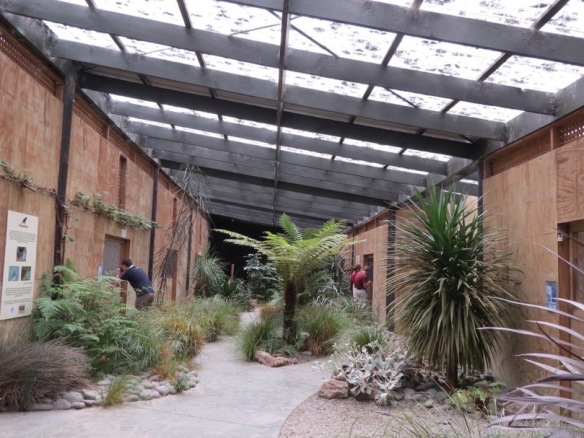 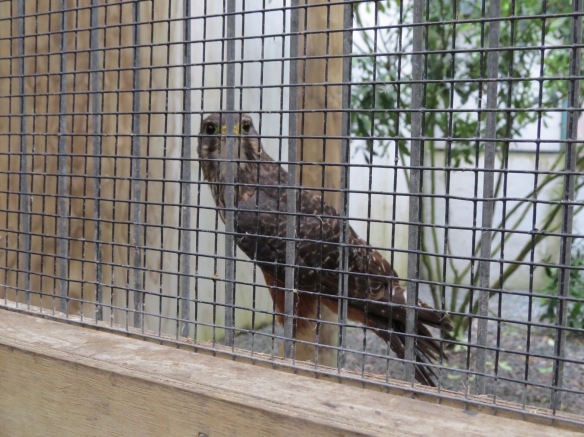 There was an awesome ‘fly-by’ by two different falcons (“little spitfires”, a very apt description) accompanied by some very interesting talk. It was easy to see how the handlers loved their jobs and the birds; one of them (Debbie Stewart, in photo below) founded Wingspan as a grass roots project and has spent 30 years bringing conservation, people and raptors together. She received the NZ OM for her dedication. 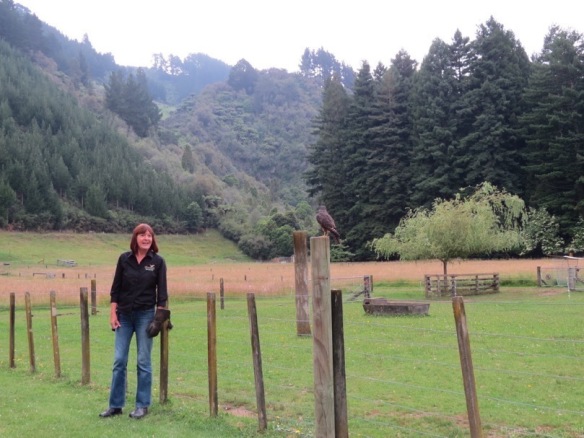 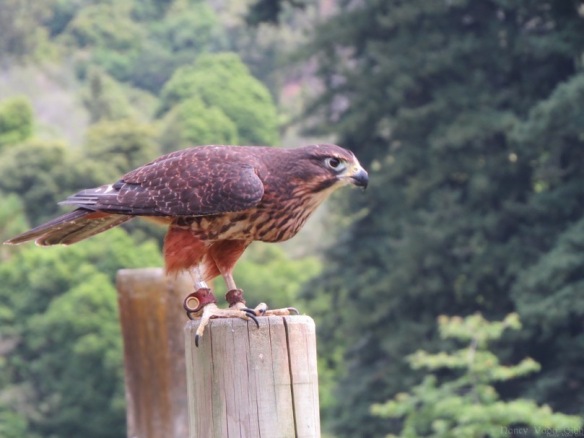 The two falcons we saw flying free that day were either rehabilitated or bred from chicks. After their display spectators were invited to feed them morsels of meat. We were warned not to clap until the end of the first display as Ozzy the bird Ozzy knew that meant he could go back to his ‘home’ and have a proper, uninterrupted feed! He shot off like a low-flying jet. 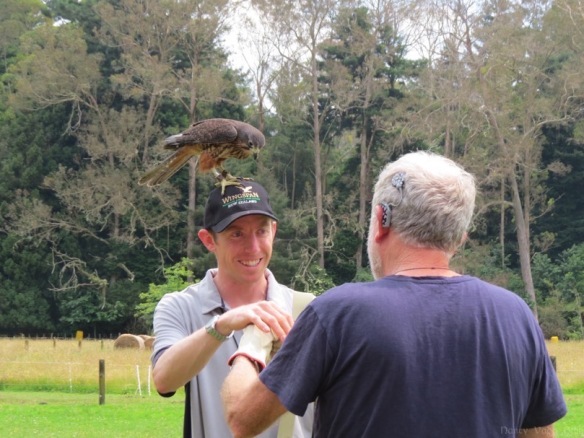 There were other raptors too including a pair of cute little moreporks and surprisingly an Australian barn owl which huddled at the back of its hut so I could only get a ghostly photograph. 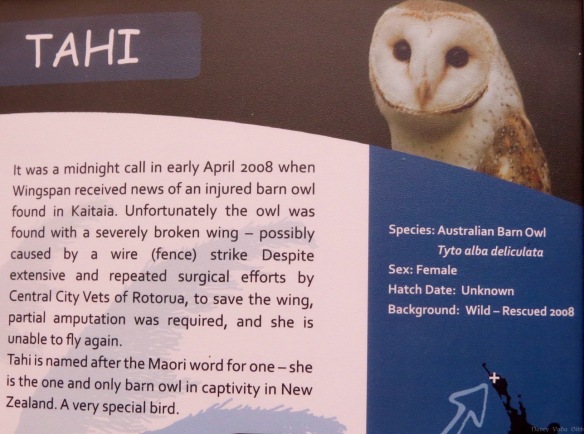 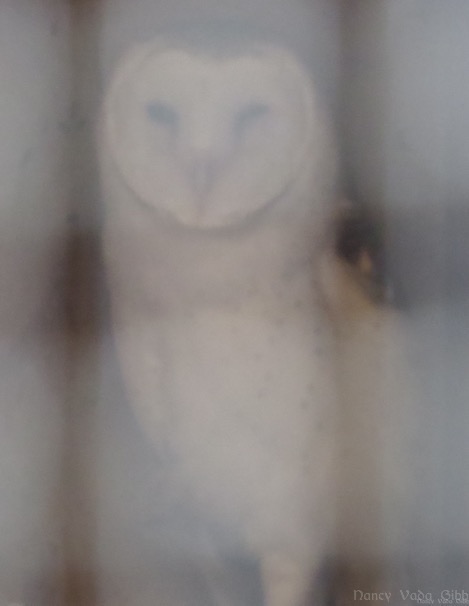 Also a small museum which included two bird skeletons with feathers. The latter are not normally shown with skeletons but really enhanced the display.

Then we were off again, heading south via Taupo where we intended to spend several days.